Petoskey Stones and Indonesian Fossil Coral, one in a Series on Quartz

This article on agatized fossil coral brings our discussion of agates to a close. I hope I have shown you some varieties of agate that you’ve never seen before! Fossilized or agatized coral, including Petoskey stones, is a type of agate I discovered in my research for these articles – and I have to say, it is now on my Tucson list for next year!

So what is Fossil Coral Agate?

Let’s take a few steps back in time. In the Devonian period about 350 million years ago, Michigan wasn’t even in the same zip code (so to speak): the land that is now Michigan was near the equator, and a warm, shallow sea covered Michigan’s Lower Peninsula and fostered the growth of coral colonies. Time and changing environment caused the corallite skeletons of the corals to be replaced by silica or calcite, becoming agatized fossils or calcified rocks. As glaciers slid across the old ocean floor, about 2 million years ago, the fossilized corals were displaced and many re-settled in the northern half of Michigan’s Lower Peninsula, where you can find the coral rocks on beaches and ditches. 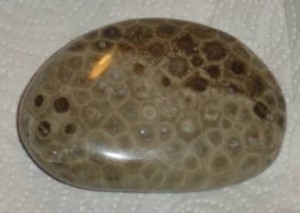 The scientific name for this fossilized rock is hexagonaria percarinata. In Michigan, this gray rock is known as a Petoskey stone, named for the city of Petoskey, Michigan, where many of the stones were found. Petoskey was named for the Ottawa Indian chief Petosegay or Pet-O-Sega, which means “Rays of the Rising Sun.” While Chief Pet-O-Sega was named before the stone was associated with him, some see its significance, as if the fossilized coral polyps are suns and the fossilized tentacles are their rays. In 1965, Michigan declared its state stone the Petoskey Stone, becoming the first state to set a fossil as its state stone or rock. Ella Jane Petoskey, the only living grandchild of Chief Pet-O-Sega, was present as the governor signed the State Stone bill.

Petoskey stones are softer than typical agates because they are fossils, a delicate 3-3.5 on Mohs Scale, but when you find them on the beach, you will discover that they are very smooth. This is because they have been naturally tumbled by rushing water, sand, and other stones. Petoskeys can be hand-polished with sandpaper and corduroy (explore p. 4 of this PDF download for a step-by-step instruction, by the Michigan Department of Environmental Quality, Geological Survey Division)

Where else can you find fossil agate coral? In the US, Florida’s state stone, Agatized Coral, which it chose in 1979, is a form of silicified coral more similar to petrified wood. This is the only gemstone naturally found in Florida, and can be located near Tampa Bay. 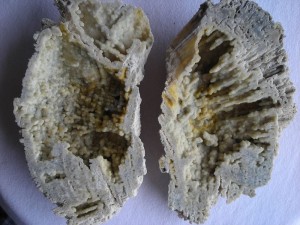 Besides Michigan and Florida, Indonesia is possibly the most famous place to discover fossilized coral. Specific locations of Indonesian coral agate are the mountainous regions of the islands of Sumatra and Java. According to Joel Ivey, a rockhound who has spent decades traversing Indonesia, Thailand, Alaska, and other locations “The development of these coral reefs are related to a single massive rise in sea level back in the Miocene [23-5 million years ago] and a sudden drop during a era of volcanic activity preserved them.” 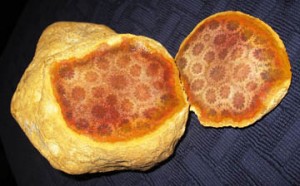 Would you have guessed what lay inside this spongelike rock? Here is a beautiful peek into a Fossil Coral Agate from South Sumatra, Indonesia, courtesy of
Joel Ivey

While Petoskey stones are typically shades of gray, Indonesian fossil coral agate tends to be pale to vivid yellow in color, but can naturally include a range of colors, such as white, pink, and orange. Agate Fossil coral can sometimes be heated to bring greater contrast and brighter colors to the stones. As you can see on Mr. Ivey’s website), many of these fossil agate coral stones are heated in traditional brick kilns. 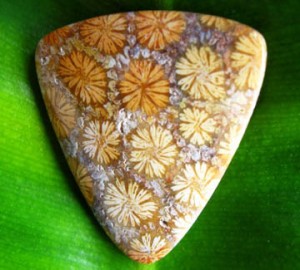 This Fossil Coral Cabochon from Indonesia shows a rare coloration, looking like a field of dandelions; courtesy of
Joel Ivey 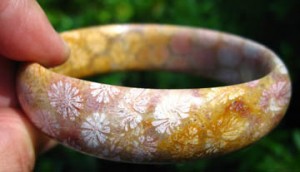 I have to mention – while exploring Joel Ivey’s website which is all about Indonesian Agates, I found this page which is all about polished agates that appear to have letters in them! Can you believe this? Yes, each of these stones is natural; it takes a creative and patient mind to spot and slowly polish a cabochon to show a letter of the alphabet. How fantastic!

Next week’s gem profile will be an introduction to the chalcedony family. Have you made wire jewelry with a type of chalcedony before? Send your chalcedony pictures to tips@wire-sculpture.com, and they could be featured in an upcoming article!