Smoky Quartz, one in a Series on Quartz 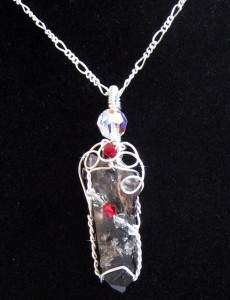 When macrocrystalline quartz is colored or tinted in shades of gray or brown, it is called smoky quartz. These gray shades can be very pale through grayed yellow-brown with or without reddish tints, dark charcoal colored or nearly black and almost opaque. Commonly found in vugs that formed in pegmatite veins, smoky quartz occurs in masses or crystals; the crystals being color zoned that sometimes grade toward amethyst or citrine colors. These crystals can be thin druzy crusts or giants that weigh nearly half a ton! Smoky quartz can also be found near water clear quartz or amethyst as well as inside geodes. The beautiful smoky coloration comes from inclusions of aluminum, calcium, lithium or magnesium. Natural radiation also contributes to the color, meaning that a lot of really "black" stones on the market have actually been cut from smoky quartz that has been artificially irradiated, or "treated." 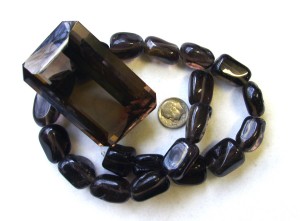 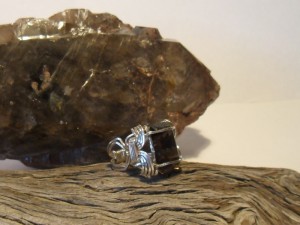 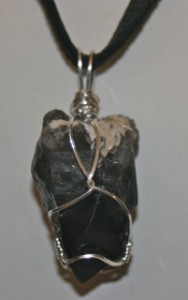 In Scotland, smoky quartz of a rich caramel yellowish brown has been used as a gemstone for centuries and carries the special title of "cairngorm." having been found and mined in the Cairngorm Mountains in the Scottish Highlands and it is the national stone of Scotland. Like several other cultures who didn’t like carrying coins, early Scots wore jewelry as a form of money. The cairngorm was also used to make Scottish "pebble" jewelry, "a mosaic souvenier jewellery made from precious metal and native stones." Naturally black smoky quartz that is almost opaque can be called "Morion" (which is also the name of a conquistador’s helmet, but the two have nothing to do with one another). The dark, lustrous smoky quartz found in Switzerland is known as "Alpine."

In Brazil, smoky quartz has been found mixed with citrine. Which came first? The smoky, that when heated during formation turned yellow, similar to the ametrine we spoke of last week. In some instances, the original smoky crystal is still "smoky" and the quartz that crystallized over it turned yellow, causing a phantom (more on phantom crystals later). 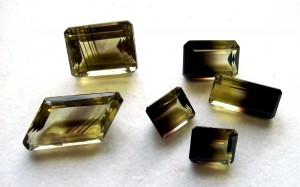 Faceted bi-colored, smoky-citrine stones that are waiting for me to do something with them. Notice the unusual smoky striations and fading color in those on the left.

When any quartz is broken, it is razor-sharp, so it makes perfect sense that the earliest known humans of the Americas,  Paleo-Indians or Clovis who lived 13,000 to 14,000 years ago would have used it to create work tools and weapons. If you scroll down to artifact #154 on this NOVA page, you will see a beautiful example of a smoky quartz "point," probably used on a spear. Ancient Romans also enjoyed smoky quartz and often used it to carve into their official seals, using the method we call intaglio today. Ancient Sumerians and the Chinese also utilized smoky quartz, by carving it into snuff bottles and small statues for home and ritual purposes . 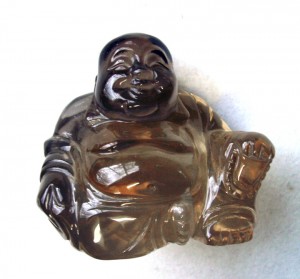 Smoky quartz is often used to make into carvings and statues. This smoky Buddha is part of my daughter's collection. 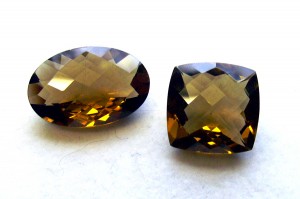 Marketing names for smoky quartz usually come from another name that imitates the color of the stone – for example, whiskey quartz. Natural whiskey quartz resembles the Scottish cairngorm, but most of what is affordable today is heat-treated to a lovely cherry wood color. Another name, root beer quartz, describes smoky quartz that looks like a brown beer bottle. However, "smoky topaz" is not a legal marketing name, as topaz and quartz are two totally different materials, and although it is considered archaic to call smoky quartz topaz, several folks still do. This misconception probably occurred when Scotland became known for its smoky quartz that was found in close proximity with natural topaz. Topaz is more expensive and softer stone, whereas smoky quartz is very affordable, more durable, and beautiful in its own right! 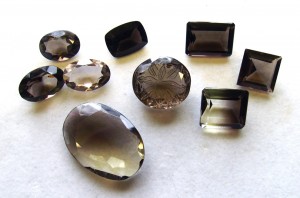 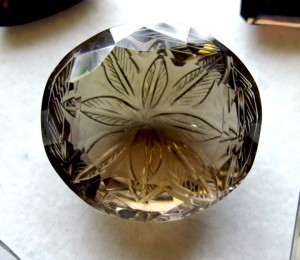 A close-up of the faceted stone in the above photo, showng the detail of the flower intaglio. Private collection, Dale Armstrong

Did you know that fortune tellers often use crystal balls made from smoky quartz? Metaphysically, smoky quartz is supposed to provide grounding for all endeavors and to negate negative energy. 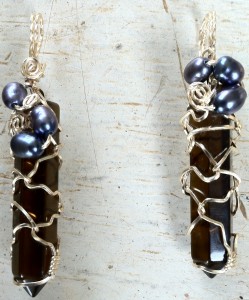 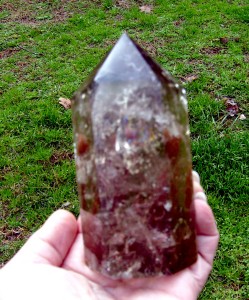 The huge smoky crystal that sits next to my work space, hoping to divert any negative energy and to keep me "grounded"!

Most of the smoky quartz on today’s market comes from Brazil and Madagascar, and a few other notable deposits are found in: Switzerland, Scotland and Russia. In the United States, a very richly colored smoky quartz can be found in the Pike’s Peak pegmatites of Colorado; smoky quartz is also mined in Idaho and can be found in Montana, California, Utah, Maine, and North Carolina. Unfortunately if you have smoky quartz from Arkansas, it is more than likely a milky to clear quartz that has been heated.

Next week I will tell you a bit about lighter colored, rose quartz! Have you made wire jewelry with rose quartz before? Email pictures to tips@wire-sculpture.com, and they could be featured!