Gem Profile June 7: What is Rhyolite?

When I was a child, my family took a vacation to Yellowstone every year where I ended up with more pictures of the rocks than of the geysers. One year we took a trip to Crater Lake in Oregon and I was amazed at the Lake and the absolute power of the volcano that created it. Later on, I watched in fascination as Mt. St. Helens exploded causing the same destruction as a 5-mega-ton bomb. At this point I thought that all volcanoes acted the same; they exploded causing major damage. It wasn’t until after I visited Hawaii that I really began to research and discover the differences not only in volcanoes, but in the types of magma and lava that create them. One of these types of lava is the subject of this profile; Rhyolite.

Rhyolite gets its name from the Greek word Rhyax meaning stream which describes the way the lava flows forming visible bands in the rock. Another name you may see for Rhyolite is Rainforest Jasper, which is a bit of a misnomer. Jasper is a metamorphic silicate rock that has small crystals and high silicon content. It looks almost like Rhyolite, and contains almost the same minerals which could explain the name. The Rhyolite that is named Rainforest Jasper is found mainly in Australia and is a lime green stone with crystals of purple and clear quartz suspended in the matrix.

Rhyolite is an extrusive igneous rock with the same chemical composition as Granite. Remember that “extrusive” means that it is “pushed out” or extruded from the ground, and igneous means that it comes from magma. Rhyolite is also highly viscous…it doesn’t flow well…and tends to cool quickly and “plug” a volcano which can cause a very violent eruption after gasses build up. 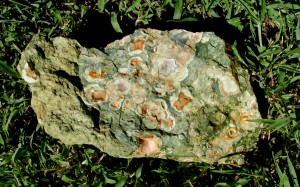 When Rhyolite erupts, it can form several different types of stone. The pumice we use for cosmetic or decorative purposes is Rhyolite with lots of air bubbles trapped within it. The Maori of New Zealand used Rhyolite that had cooled quickly not allowing gas bubbles to form for their obsidian weapons. We also see Rhyolite that has cooled at different rates forming either a light-colored stone with very small grains or a more porphyritic texture which has larger grains suspended in a “glassy” matrix. This later type of Rhyolite is the kind we use in making jewelry and can contain quartz, mica, chalcedony, feldspar and other minerals that form larger visible crystals as it cools. As a general rule; the longer it takes a rock to cool, the larger the crystals that form within it. In the case of Rhyolite, the lava cools very quickly and often doesn’t have the larger crystals, making the stone we use for jewelry fairly rare. 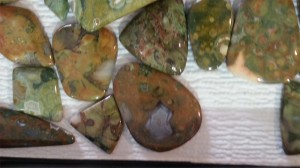 Polished Rhyolite cabochon at a gem show in Tucson. See the pretty windows in the stone?

I thought this week we’d take a special look at the town of Rhyolite, Nevada! Yes, there is a town called Rhyolite, it’s a ghost town now, but was a booming gold mine in the early 1900’s. Rhyolite is on the way to Death Valley, California near Beatty Nevada. You guessed it! The town was named after the plentiful Rhyolite stone in the area and sits in the middle of the bullfrog mining district and was the largest town in the area for about 10 years. Camping facilities are located in Beatty and the town is open for exploration and rock-hounding in the Rhyolite hills. Who knows, in addition to beautiful specimens of Rhyolite, you may even find some gold and start your own mining boom town! 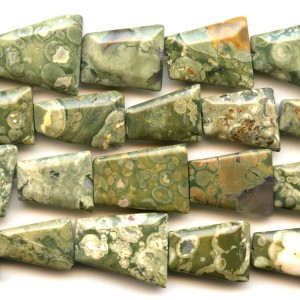 Aren’t these Rhyolite trapezoid beads beautiful? The good news, they are available on Wire-Sculpture.com (click the photo)

Since Rhyolite is a fairly common rock and found on every continent, if you’re going rock-hounding keep in mind that it is a light colored stone with few visible crystals can also be pumice or obsidian and is the same chemical formula as granite. It’s also a 6-7 on the Mohs scale and has been used is ornamental carvings and jewelry throughout history. Even though Rhyolite is fairly common, it is still a bit of a mystery, especially when you consider the crystals that form within the matrix. Some of the crystals form at different temperatures than the cooling stone, and some are formed at great depths within the earth making Rhyolite a very special and interesting stone indeed!

Next week, we’re taking a look at Cat’s Eye which is a natural gemstone, and very beautiful, but Cat’s eye can also refer to a man made stone that comes in a rainbow of colors. Have you made jewelry with any type of Cat’s eye before? Send us pictures at tips@wire-sculpture.com and they could be featured!