This week I thought we’d try something a bit different. We’re going to take a look at two different types of minerals with different chemical compositions, hardness and even form at different temperatures under different types of environments; yet they are often found together.  When I say together, I mean literally; one growing within the other. So how does this happen?  Science hasn’t quite figured that one out yet, but they’re working on it.  It reminds me of the question that came up as I was changing a light bulb the other day. I pulled the bulb out of my lamp only to find that there were three little bugs in it.  I have no idea how those gnats got in my light bulb, but there they are!

The first mineral we’re looking at is Rutile.  From the profile last week, we learned the rutile creates chatoyancy within a stone and is responsible for the stars, or asterism, in stones as well. Rutile is composed of titanium dioxide which is a main component of refractory ceramics, titanium metal, and the bright white pigment used in plastics and other items that are  bright white in color.  Interestingly enough, it is also used in sunscreen due to its ability to absorb ultraviolet (UV) light.  So, rutile has a base of titanium, but when associated with other minerals, can be different colors and create different effects within a stone. We will talk about golden rutile a little later in this post.

Synthetic rutile has been around since the late 1940’s and has even been used as a diamond substitute called “Titania,” but at only 6 on the Mohs scale, it’s not as durable as a diamond and is not used much now in jewelry.  Rutile, whether natural or synthetic is still a 6 on the Mohs scale and is found in various areas of the world generally associated with volcanic regions and quartz.  Though rutile forms at lower temperatures and pressures than quartz, it’s also found inside quartz crystal. When the rutile grows within quartz, it takes on the name; rutilated quartz.

Quartz, one of the most common minerals on earth, is found on every continent and makes up 12% of the Earth’s crust; it’s a pretty common mineral.  Quartz is created at high temperatures and pressure with varying inclusions giving us different types of quartz from clear to rose and smoky.  One of the most beautiful types of included quartz is rutilated quartz.  Rutilated quartz can be found in Australia, Brazil, Kazakhstan, Madagascar, Norway, Pakistan and the United States.

Golden rutilated quartz was first found in Brazil in the in the Serra da Mangabeira mountain range in the 1940’s where miners were originally picking up pieces of clear quartz for optical uses. The included rutilated quartz was discarded, not being of much value in optical applications, and eventually, some of the material made its way to Bahia, Salvador where the gem dealers saw, well…a gem! 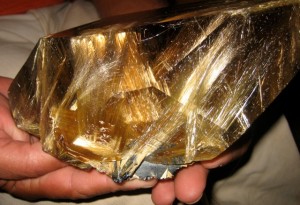 The rutilated quartz from this region has beautiful golden threads throughout the stone.  This golden rutile is associated with hematite and grows in impressive thick strands within the quartz. Because golden rutile is also composed of titanium dioxide, it has high concentrations of hematite, while the rutile responsible for asterism is mostly asbestos. This type of rutile rarely forms stars within the stone, but instead gives us a beautiful long thin needles of color due to the orientation along the axis while the rutile is developing.  Since quartz has a hardness of 7 and rutile is a 6, it can be difficult to cut and polish a rutilated stone without creating pits and cracks in the quartz. 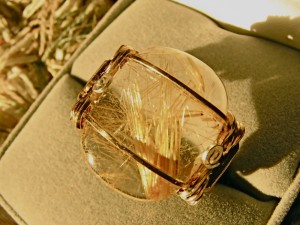 Now, getting back to the gnats in the light bulb; just how does rutile form within quartz?  When quartz forms, it is at extremely high temperatures – pressures usually associated with volcanic activity.  When lava degases it created bubbles or vugs and pegmatites which form large crystals at the end-stage of cooling.  One of the theories is that quartz permeates a vug and then the rutile precipitates and grows within the stone as it cools.  The other one is that as the quartz pegmatite is cooling, it develops microscopic cracks which allow the rutile to grow.  Either way, the strands of rutile develop within the quartz giving us a beautiful color show of long thin needles within a clear stone, which is why rutilated quartz goes by the names Bahia Gold, Venus hairstone, and cupid’s darts. 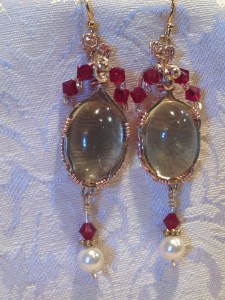 Next week, we’ll “jet” off to learn a little about lignite!

Have you made jewelry with any type of Jet before? Send us pictures at tips@wire-sculpture.com and they could be featured!

A special thanks to Brian Charles Cook: