Quartz Introduction, first in a Series on Quartz

The subject of the mineral quartz, is huge! Basically there are two types of quartz, cryptocrystalline (or microcrystalline) and macrocrystalline. Cryptocrystalline refers to the group of quartz materials that formed with a microscopic crystal structure. This array includes: the agate family; all varieties of chalcedony like carnelian, chrysocolla, chrysoprase and sard; chert and flint; all jaspers; and quartz pseudomorphs such as petrified wood. 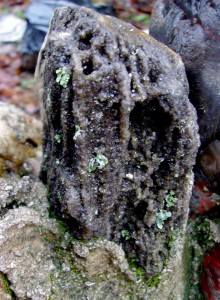 A petrified tree branch covered with massive smoky quartz crystals in Dale's "rock" garden. That day was rainy, but in the sun this specimen sparkles like crazy!

Macrocrystalline quartz refers to refers to crystals that are visible to the naked human eye and includes: amethyst, citrine, smoky, rose quartz, prase, rock crystal, ametrine, tiger eye, hawk eye, aventurine and ferruginous quartz. Instead of writing a complete book on this subject, I will touch on each quartz variety in a series of articles, focusing on some interesting facts that you may find handy when selling your wire jewelry designs.  Also included will be a special section on the enormous variety of possible quartz inclusions, as well as heat and other treatments that are used on these already gorgeous gemstones. 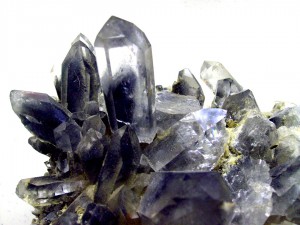 When I add research to my own knowledge for each gem profile, I sort through the technical stuff to bring you what I find most interesting and usually the origin of a specific name is easy to find. Not so with quartz. Although the journey was fascinating, basically the best research paper I found (linked to below) states that the origin of the name we use for one of the most common minerals on the face of the earth, really is a mystery!  It seems that all ancient, written historic reference to quartz, simply calls the rock material "crystal", meaning "ice".  (As early Greek scientists were prudent enough to question the planet we live on and to write down their experiments and results, describing quartz as a ‘permanently frozen icy rock’ makes perfect sense to me.) However, in 1505 early Saxon silver-miners (in what is now Italy) referred to a white rock with silver veins running through it as  ‘quertz'; short for ‘querkluftertz’, describing the ‘cross-vein-ore’ type of silver they found. Later, the English translation of an Italian mineralogy book in 1530 brought about the spelling we use today of ‘quartz’. (You can read this most interesting paper for yourself: ‘On the origin of the name ‘quartz’ (PDF download link) by S.I. Tomkeieff, 1941.) 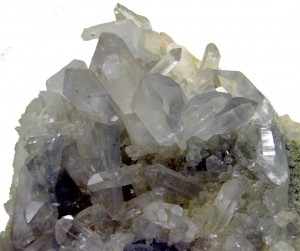 A nice specimen of water clear rock crystals found by Dale at Fiddler's Ridge in Arkansas.

Quartz is a mineral composed of silicon dioxide, or silica. With a Mohs hardness of 7, it is a very remarkable lapidary material that is abundant all over the world, in all stages of clarity from transparent through opaque. Quartz is the most easily recognized crystal of the mineral kingdom and it is the main building block of many igneous, sedimentary, and metamorphic rocks. While quartz itself is both physically and chemically resistant to erosion, white to clear gains of sand are actually tiny rounded masses of quartz that has weathered out of other forms of rocks, for example granite. Similar to the main product made from silica, which is glass, quartz has a conchoidal fracture and a "glassy" luster.

Quartz and a Few Varieties

Pure, colorless quartz is known as rock crystal, mountain crystal and water quartz, confirming the "frozen rock" quartz definition referred to by ancient Greeks. When quartz forms near other minerals or certain elements, like manganese, iron, nickel, chromium, and copper, it can take on different colors. (We will explore these colorful results in upcoming quartz articles.) 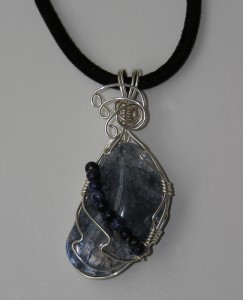 Irisha Patterson wire wrapped this dyed blue quartz cabochon into a pendant, adding a harness of blue lapis beads across the face of the pendant.

The variety of  crystal shapes that quartz forms really is amazing! Perhaps the best example of what I mean is this plate of crystals my family and I dug in Arkansas. Taken from the top, you can see how the crystals grew on both sides of this matrix rock, that was in the middle of two gas pockets. 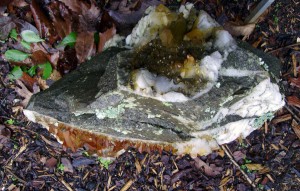 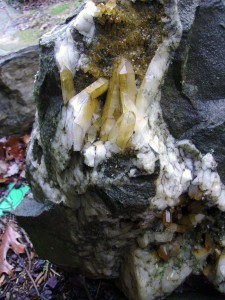 While the other side of the plate is covered in about 8 different crystal shapes, that all grew in the same pocket; and are golden colored due to being stained by the iron rich clay that filled in around the crystals. 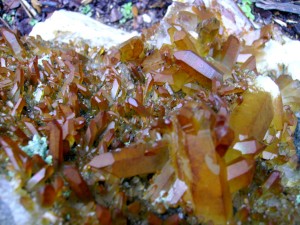 This is another example of the unusual way that quartz crystals grow. It is called cactus, pineapple, or spirit quartz, because the larger crystals are covered in smaller ones that grew later. Found specifically near Pretoria in South Africa, this natural specimen of quartz happens to be amethyst, with citrine accents – almost like Mother Nature was planning the design! 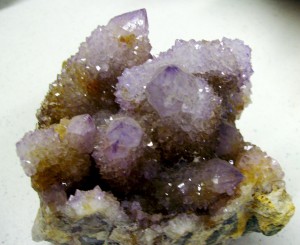 Many other crystal forms of quartz carry names according to what their formation resembles, for example: artichoke – where smaller flat crystals later grew on top of a main crystal, with their points heading up and away, organized like the vegetable, also called "sprouting" quartz. Then there is crocodile or alligator quartz that metaphysical folk like to call ‘elestial’ quartz. This crystal growth is rather massive, where all of the smaller triangular crystals that grew on a main crystal seem to be parallel to one another; mimicking the pattern on an alligator’s hide.

I am not sure if this specimen I found in a pegmatite vein in New Hampshire would qualify as an "alligator" or an "artichoke."

This quartz cabochon was wrapped in purple craft wire by Carol Roskey.

Quartz has been used by man since the dawn of human time. Obviously because it breaks with such a sharp edge, early weapons and tools were the first known use. Archaeological digs all over the world prove that it was also a valuable trading material. In the early 1900s it was discovered that quartz has strong pyroelectrical and piezoelectric properties, both of which made this mineral very important when developing "crystal" radios during WWII, allowing ground communication with planes. Quartz is also used in the manufacturing of wave stabilizers, pressure gauges, lasers and watch faces. Perhaps the largest use of quartz in today’s world is in glass, paints, concrete and abrasives; it is also used in electronic chips, specialty lenses and black lights. Commercially made, synthetic quartz is flawless and used in areas of industry that benefit from its special "double refractive" property, including parts in your computer and capacitors that are also in space stations. 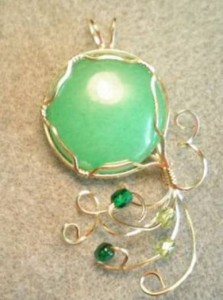 As I have mentioned, the varieties of quartz are almost endless and though it can be found all over the earth, one of the most important locations is Arkansas, USA. The quartz crystals that come from this state have been found to be from the deepest parts of the earth; therefore they are the most pure and have the best properties of any quartz in the world. Another notable location where quartz is heavily mined is Brazil; producing some of the finest gem quality material ever. This AAA grade quartz is faceted, carved and in some cases treated, resulting in a wide range of available products useful in the jewelry making industry. 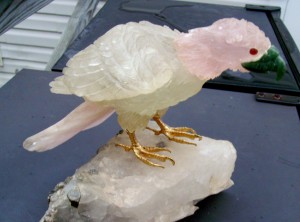 This Brazilian-carved 10-inch tall eagle is made of several quartzes. The body is pale citrine, the head and tail are of rose quartz, the eyes are carnelian and the beak is aventurine. Private collection, Charlie Armstrong.

The stories and lore that surround quartz is almost endless! I am particularly fascinated by the Native American legend that spans tribes in North, Central and South America, telling of the 13 crystal skulls. With the dawn of a new year upon us and all of the speculation over what prophecies will or will not come true in 2012, I invite you to read it for yourself: World Mysteries – Crystal Skulls. Each different color and type of quartz carries its own metaphysical meaning and use, which I will talk about within each article. 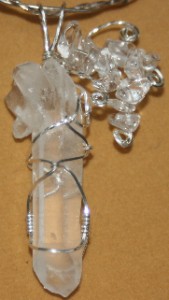 Next week, Part 2 of this Quartz Series will touch on transparent to translucent quartz gemstones that are "macrocrystalline", or crystals that are visible to the naked human eye. These include: amethyst, citrine, smoky, rose quartz, prase (not chrysoprase), rock crystal, and ametrine. Have you made wire jewelry with any of these quartz stones like amethyst, citrine, rose quartz, and smoky quartz before? Email pictures to tips@wire-sculpture.com, and they could be featured!