Although purple was my favorite color at age 10, I was not allowed to wear it because I was told that both purple and black were “mourning” colors and meant to be worn by older women, not young girls. Being artistic, I thought I could get away with wearing purple if I brightened it up by adding green or orange – not! I was told that certain color combinations just did not go together, like green and purple, or orange and purple. My, how times have changed! Of course, back then my mother was heavily into mineral collecting, but only those found in North America. Little did she know that Mother Nature had already decided that yes! Purple and orange DO go together quite beautifully, in the natural formation of the mineral known as Charoite. (Mom lightened up as I got older.) 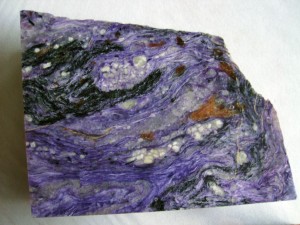 A large polished slab of charoite that my daughter will not let us cut because it resembles Vincent van Gogh's painting,

It is said that charoite was first discovered in the 1940s but that it was not recognized until around 1978. Perhaps this is because the one place in the world where it can be found is in Siberia, where both the weather and terrain are beyond the definition of harsh. Charoite is a calcium potassium silicate mineral forming in limestone deposits, in beautiful shades that range from lavender to lilac to purple; with contrasting colors of black, green and orange. Although the name relates to the Chary or Charo River in Yakutia, Russia near where charoite is found, Russian people call it Sirenevyi Kamen or lilac stone.

The gem-rock charoite is always found as a massive mineral, meaning that it does not crystallize. Its silky chatoyant, violet swirls are often contrasted by the black needles of aegerine-augite, the peach to orange of tinkasite and green microcline. When a lapidary works with charoite they are often presented the challenge of the stone “peeling” away at its edges due to the fact that the stone is composed in irregular layers, similar to a mica schist. Charoite is also difficult to polish because it is a fibrous material and all of the different inclusions each have a different hardness. Besides being made into cabochons and beads, charoite registers a 5 to 6 on the Mohs hardness scale and carvers use it to make ornamental items such as urns and vases, candlesticks and statuary. 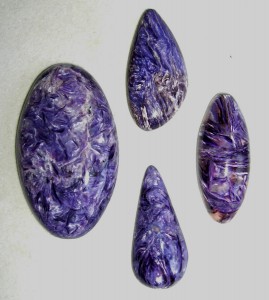 A selection of AA grade charoite cabochons. Notice the orange tinkasite in the cab on the left. Private collection, Dale Armstrong.

Considered to be rather rare because it only comes from one location, open pit mining is only done a few months out of every year, often producing huge quarry sized stones. However as this is a “new kid on the block,” when looking to purchase charoite, you should be aware of some sellers’ classifications. Charoite with a lot of chatoyancy, few inclusions, nice feather-like structure and good deep color is considered to be the best quality; while material with inclusions of black, peach, and or orange is not considered to be pure and should be more affordable. As a designer, I prefer the inclusions! 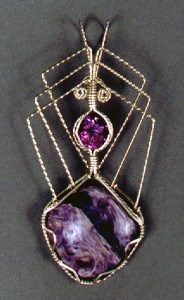 A charoite and amethyst pendant made in sterling silver by Dale Cougar Armstrong, titled: "Balance."

Charoite is distinctive and easy to recognize. Its pearly luster and deep chatoyancy might make one think it isn’t a natural stone, but the only imitations are plastic or possibly opaque to translucent fluorite that has been intentionally labeled charoite to make a sale. A lot of the charoite beads on the market today have been stabilized with resin, making the material easier to work and polish. Natural charoite will be quite a bit more expensive than stabilized material and both are equally beautiful.

As a new gemstone, I found no legends or stories about charoite and yet a very wide variety of metaphysical beliefs! Everything from reducing negativity and eliminating bad dreams, to reducing stress or increasing creativity.

Next week I will tell you about another favorite stone(?) of mine, that’s truly “not of this world,” moldavite!
Have you made wire jewelry with Moldavite before? Email pictures to tips@wire-sculpture.com, and they could be featured!