Black Precious Opal
one of a series, Mystifying Opals

When most people hear the word “opal”, the image that automatically comes to their mind is a white or black stone flashing with an iridescent spectrum of colors, or “precious” opal. As mentioned in our Mystifying Opal Series, Part 2: Common Opal, the play of color found in opal material is what the value of a stone is based upon. This special feature is caused by the composition of a stone where the micro spheres of silica are uniform in shape and size, and as light passes through them it is split, causing opalescence. I think June Culp Zeitner best described precious opal by calling them “crushed rainbows.” 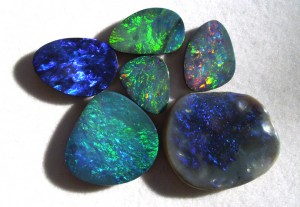 The base silica of precious opal can be black, gray, blue, or white. Some of the most beautiful stones are the “black” opals that are found in New South Wales, Australia in an area known as Lightning Ridge. These stones usually have a background in hues of black to gray. The base color can also be red, orange, yellow, blue, green, and brown, with one dominant color and usually a secondary color. According to Cynthia B. Reuschel, “If a stone has a dominant blue and secondary green, it has a blue-green fire. If it has other strong fire colors, it is a blue-green multicolor. Red fire is generally the most valued color.”

The geology of the Lightning Ridge area is made up of sandstone and conglomerate, layered over weathered claystone. The opal is found in the claystone layer, also known as “opal dirt,” at depths of 20 to 59 feet (8 to 18 meters) in seams and rounded nodules called “nobbies.” This dirt is as hard and dry as concrete! Although native Aborigines have been aware of opal for centuries, the Australian Department of Mining claims that the first stones recorded from Lightning Ridge were found in 1873.

Mining black opals in Lightning Ridge is performed using two methods. Either a shaft is sunk from which tunnels can emerge while digging out the seams and nobbies, or the area is completely dug up as an open pit. While researching Australian mining, I came across the website of a miner-by-day who is also a photographer. This gallery page, Ridge Lightning has some awesome images of what it is like to tunnel mine at Lightning Ridge, as well as some shots of the opals found there. 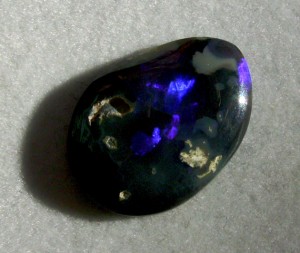 A black opal that may not make it to a final polish unless the potch vugs can be worked out.

Top grade precious black opal is very rare. The value of a stone is based on several points: the base color; the brightness of fire; the color of the fire; clarity/inclusions; the consistency of color across the entire stone, and the “directionality,” meaning, to best see the colors, does the stone need to be viewed at only one angle? The best Lightning Ridge black opal sells for from $15,000 to $20,000 per carat! Can you imagine having 17 ounces of good to excellent material and selling it for a total of $30? You’ll have to read Lightning Ridge Opal by my friend, gemstone expert David Federman to find out just how this happened. Although Lightning Ridge is known as the “capitol” of precious black opal, there is one other location in Australia, Mintabe.

On the subject of black opal, some folks may have heard about Honduran black opal. Yes, the basalt matrix is more of a dark gray rather than deep black, and most of this opal formed in very thin seams so it is most often sold in the form of a doublet or a triplet. A Honduran “matrix opal” reminds me of a black paper covered with multi-colored glitter! Because some of the volcanic material is filled with very small vugs, the opal that filled those vugs resembles tiny pinpoints of color. The colors included represent the entire spectrum, but a lot of the rough available is very difficult to polish due to the fact that it contains a lot of pockets of “potch,” a softer, powdery pumice material that a lapidary finds difficult to work around. (Properly working this material has been haunting my husband for years!) 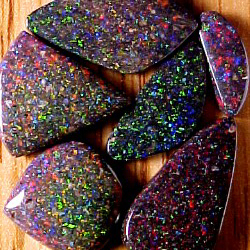 What Honduran matrix opal can look like, but beware of sugar treatments! 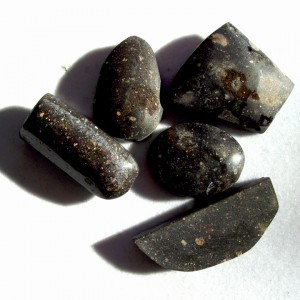 Pre-formed Honduran black opal. Yes, in my studio we have been experimenting with different stabilization methods, so hopefully this material will one day be polished!

Did you know that an opal similar to Honduran can be found in the state of Louisiana? Some of it has a dark background and some is almost blonde in color. The stories about Louisiana opal vary from source to source, my favorite is in a past issue of Rock ‘n Gem magazine, around 1995. The United States also boasts some fine, precious black opal that rivals Lightning Ridge material! On Rainbow Ridge in Virgin Valley, Nevada, a dazzling dense black opal is mined.

Talking about darker opal backgrounds wouldn’t be complete if I didn’t mention “chocolate” opals. Obviously the name was chosen because of the rich dark and milk chocolate colors of certain precious opals found in Ethiopia. Modern man didn’t really take notice of these lovely stones until the late 1990s; until then, Ethiopian opals had been known to be an unstable stone that would quickly craze. Lapidaries and jewelers have now figured out about how long it takes an Ethiopian opal to cure after it has been dug out of the ground, before they attempt to cut it. Chocolate opal can vary to a brownish-peach background and has awesome color play in deep, electric hues including green, blue, orange, yellow and red; some even flash a neon indigo or turquoise! Ethiopian opal forms in nobbies encased in rhyolite. These geode like formations most often contain just potch, only about 20% actually contain opal with play of color, therefore triple A grade Ethiopian opal is rare and can cost up to $200/ct for a faceted stone or cabochon. Believe it or not, archaeologists excavating in Kenya found very early tools, rather than jewelry or ornaments, made of this opal, suggesting that opal was mined in Africa before Australia, but who really knows? 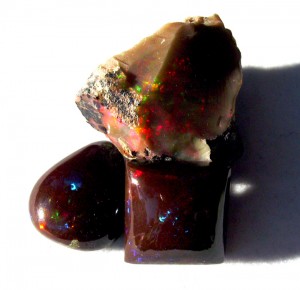 Australia, Africa, and the United States are just three on a long list of locations that also produce lovely White Precious Opal, the subject of next week’s Gem Profile.