In my quest for beautiful and rare stones, I thought we would travel to Israel to learn about a stone that is not only named for a city, but is also the national stone of Israel.  We will not travel to the Israel of today though, but to the 10th century BCE, the time of Solomon and the kingdom he ruled.

How do we get Eilat Stone?

Some of the most extensive copper mines from this period existed in the kingdom of Edom which extended from the Dead Sea to the Golf of Aqaba (Gulf of Arabia). 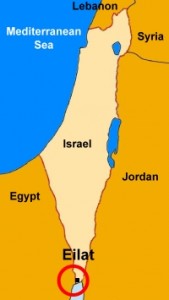 The Edomites were mostly nomadic people who lived in tents and also mined copper from the Timna mines which are located near the city of Eilat. The Edomites were known to have had many conflicts with the Israelites, and it is thought that King Solomon may have been able to either exert influence or form a trade agreement for the copper located within the mines. 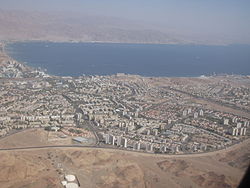 In addition to copper being mined at Timna, a beautiful stone made of malachite, azurite, chrysocolla and turquoise was found as a secondary copper mineral.  The stone was named after the city closest to the mine; Eilat in an area known as “King Solomon’s Mines” which was named by American archeologist Nelson Glueck.  Eilat has also been found in tombs and archeological sites dating from this same period.

Eilat, or “King Solomon’s Stone,” looks like an artist took blue, green and gray paint then swirled it together forming beautiful patterns set in stone. Eilat is found in the Timna mining district and within one other mine along the Red Sea which has been played-out.

Though similar stones have been found in Arizona and Africa, only the Eilat from Israel contains chrysocolla specific to that region and can be called “true” or pure Eilat stone.  This really shouldn’t matter to most artists or their customers, but probably will to the purists among us; caveat emptor. 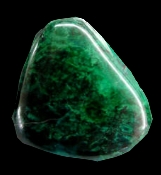 Israel today encompasses much of the kingdom of Edom with the mines and the city of Eilat being at its Southern tip. King Solomon’s Stone is also becoming more and more difficult to find due to the mine at Timna flooding and the designation as a national park and archeological site.  Since the stone is really only found in this one area, the supplies are dwindling and prices are climbing.

Caring for your Eilat Stone:

Eilat stone is a cousin of turquoise and should be treated and cared for the same way.  Be very careful with the stone if there are light or sky-blue inclusions as these tend to be extremely soft and may crumble.

Eilat is usually cut en cabochon or round beads to show the beautiful patterns and swirls of malachite and turquoise in the stone. Due to the pattern variations, no two stones will look alike which adds to the beauty and uniqueness of Eilat. 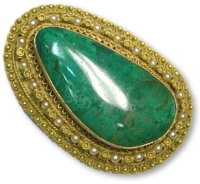 Next week we’ll take a look at another rare beauty: Vesuvianite. First found adjacent to lavas on Mount Vesuvius, this beautiful mineral is fascinating! You won’t want to miss it. 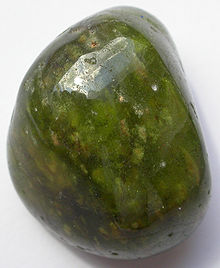