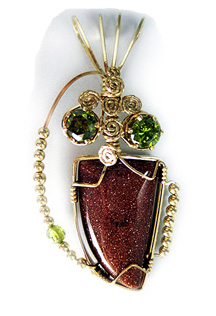 Sometimes a piece of work takes on a personality of its own, which is exactly what happened with this piece, when a face emerged! The pendant was created using a designer, brown goldstone cabochon, (18x30mm); gold filled 22g and 24g square half hard wire; two 6 mm faceted, peridot CZs with snap set; one 4 mm faceted, round, olive CZ bead; one 5 mm gold filled bead, and eighteen 2.5 mm gold filled beads. A frame was created for the cabochon, with the beads on the right put in place before the last wraps. The wires at the top were wrapped together, then the two peridot CZs were wrapped into place. The bail was formed using four wires and the extra wires form rosettes, with the exception of one wire that was pulled down the left side and beads added to it before being wrapped into the frame. And that's how this pendant took on a personality of its own, in spite of the designer.