Conch (pronounced “konk”) is a fast-growing sea snail from the gastropod family that lives in shallow waters and eats algae. The name conch generally applies to large sea snails that have a shell that comes to a point on both ends and a high spire, though some mollusks given the name conch are not of the strombidae family at all, but they look similar and are called conch anyway.  The conchs grow from egg to maturity in about four years taking the calcium carbonate from the water using it to form their shell. Conch shell is not nacreous; therefore, it doesn’t have the pearly luster that other mollusks have.

The most recognizable of the conch is the Queen Conch, which has a large shell that is used for decoration, musical instruments, and as a protection from burglars (read on to discover why!). The conch’s meat is also used in chowders, salads, and fritters. The queen conch lives about 25-30 years, but can live up to 40 years. 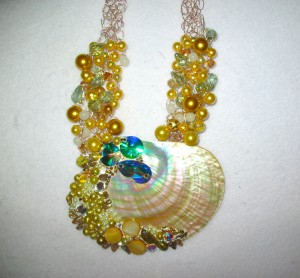 Diana Harwood used Swarovski Crystals and Crystal Clay to embellish this shell, which is part of a wire crochet necklace.

The queen conch is found mostly in the warm waters of the Caribbean, off the coast of Central and South America and in the waters off the coast of Florida. Currently there are restrictions on fishing for conch. It is prohibited in Florida and closely regulated throughout the Caribbean, where it is considered and endangered trade species under the CITES convention. The only place conch is considered a stable population is in the Turks and Caicos islands, where a successful conch farm is located. Other countries are studying the possibility of conch farming as well.

Conch shells are used throughout the world for various purposes from bugles, hand weapons and even ink holders. In the Bahamas, homeowners place broken conch shells along the tops of fences to discourage burglars from jumping or crawling over the walls…OUCH! 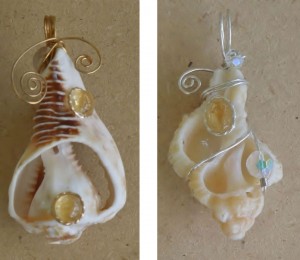 Janet Knight wire wrapped these shell pendants: on left, a helmet shell in gold-filled wire; at right, a murex shell in sterling silver wire. Both have citrine gemstone accents.

The shankha shell is sacred in Hinduism and is used as a ceremonial trumpet and is sounded during worship. The warriors of ancient India, Hawaii, and the Maya cultures also used trumpets of conch shell to announce battle.

In the jewelry world, conchs are used for cameo carvings, scrimshaw and beads. Conch can produce “pearls,” though not of the nacreous variety. Conch pearls range in color from white to pink, brown and even deep purple or black. The pearls are not nacreous like other mollusks, but have a chatoyance to them that is created by the fibrous crystals of calcium carbonate used to coat an irritant just like an oyster or mussel would do with nacre. Since the conch doesn’t produce nacre, but calcium carbonate instead, the long fibers give the illusion of “flaming,” which is what the chatoyancy is called. Because only 1 in about 100,000 conch produce pearls, they are very valuable and command a high price. 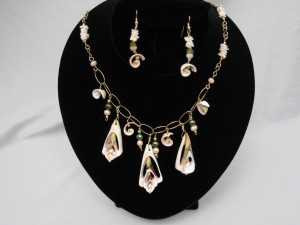 This shell necklace & earrings set by DeLane Cox features shells that have been cut to show the inside, plus freshwater pearls, peridot chips, and shell pieces, all set in 14k gold-filled wire.

Now we get to the humble cowry, another snail whose shell has been used not only for jewelry but currency, divination, and even as a status symbol throughout history.

The cowry is also an algae eater that ranges in size from smaller than 1/4″ to about 8″ long, depending on the species. There are over 250 different species classified as “Cowry” so far. The cowry snail is active at night and hides in the rocks and crevasses of reefs during the day. 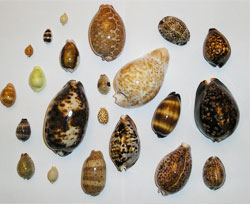 Cowrie shells come in a wide range of sizes! See their porcelain shine? image via

Cowries are difficult to find in part because they hide during the day, but also because they have a mantle that they use to cover and protect their shells when they are on the move. The multi-colored mantle is also beautiful and has little “fingers” on it that help to warn of impending danger and when touched, the animal withdraws into its shell which covers it almost completely.

Cowry shells are egg-shaped with a smooth and shiny porcelain appearance and colorful patterns. The ancient Romans called the shells porceletta, which led to the name porcelain used to describe the beautiful shiny fine pottery introduced to Europe from the Far East because the shine and shape reminded people of the porceletta shells. Cowry shells have also been used throughout the ages as currency especially in ancient tribal cultures and in parts of Africa into the early 20th century. The Chinese symbol for currency is a stylized character of a cowry shell.

Throughout history we find cowry shells not only used as currency, but also in ornamentation and jewelry. Tribal cultures used cowries as a status symbol often wearing large cowry shells to signify a chieftain or other important village person. In the jewelry world today, the cowry shell is most often seen in “native” style necklaces and carvings. We can find beautiful examples of cameos and other carvings from cowry shells. 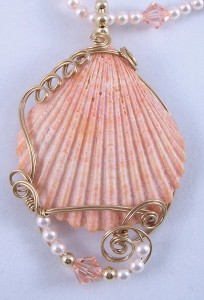 As with any shell, proper care should be taken when carving, drilling or filing a shell. Remember that shells come from critters and may contain trace amounts of organic materials that you don’t want in your lungs. Also, the dust from the shells can be microscopic and can cause problems, like any dust will, when inhaled.

Be sure to follow the general safety precautions of using eye protection, a dust mask and plenty of water not only to cool as you drill or cut, but to keep the surface of the shell wet to reduce dust particles in the air.

Now that we’ve wrapped up our look at shells, next week, we’ll be exploring Unakite, the hot coral-and-green stone that is so unique! Have you made jewelry with unakite before? Send pictures to tips@wire-sculpture.com and they could be featured next week!