Gem Profile: What is Serpentine?

As we’ve progressed through these profiles, you’ve probably noticed that the naming of stones can be pretty varied and interesting. Some are named after people; some have names derived from Greek or Latin words; and others are named simply for the appearance of the stone. Serpentine is one stone named for its appearance, using the Latin word serpentinus which means serpent-like.

Serpentine is translucent green, though is also found in yellow, white and gray, with a mottled appearance that looks like scales and is often described as having a “greasy” or silky feel and had a harness of 2.5-3. 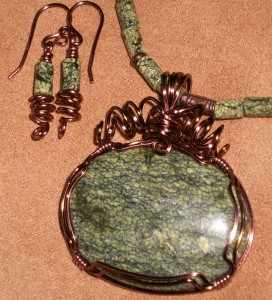 Shawnea Hardesty created this Serpentine jewelry set – serpentine earrings and a serpentine pendant – for her mother.

Serpentine is the “brand name” for a group of polymorphous rocks within the serpentine group; these rocks are sometimes called serpentinite. Polymorphous means that the rocks have the same chemical compound with the molecules arranged differently. So the hydrous magnesium iron phyllosilicate polymorphs of serpentine are classified as; antigorite, chrysotile, and lizardite all chemically the same, just having the chemicals bonded in a different way. In other words; the serpentine group consists not only of serpentine, but of antigorite, lizardite, and chrysotile: all green stones with a scaly appearance and the same basic chemical structure.

The appearance of serpentine varies depending on the structure of the bonds within the stone at the time of metamorphosis. Antigorite is named for the Antigoro Valley in Italy, where the stone is most commonly found with quarries. Antigorite is also found in Rhode Island, where it is compacted and known as bowenite, Rhode Island’s state mineral; as well as found in Maryland and Pennsylvania. Antigorite forms in fine plate-like crystals bonded with mica and is used for carvings, beads, and other jewelry applications and can be used as a substitute for jade. 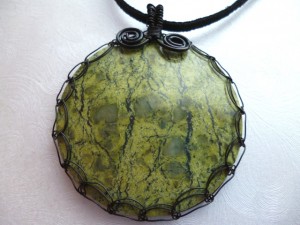 Lizardite, the most common type of serpentine used in home décor, is often referred to as green marble. Lizardite is a fine-grained serpentine with perfect cleavage and can be white, yellow, or green. The type we find in our home is usually a dark green with veins of calcite running through it. It also takes a high polish and is harder than marble, though it doesn’t weather well when subjected to the elements.

The most common form of serpentine is called Chrysotile and forms in cylindrical crystals that double back on themselves, forming long threads of asbestos within the rock. This type of serpentine is used primarily for the asbestos fibers due to their fire resistance and flexibility. Chrysotile is mined in New York, New Jersey, and other areas along the Appalachian Mountains, California, Arizona, and Quebec near the town named Asbestos. 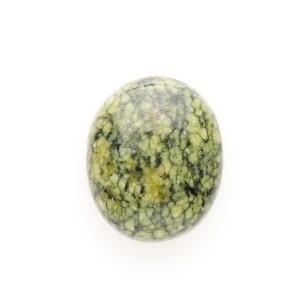 We are all familiar with the health risks from asbestos so as a side-note here; asbestos confined within a stone is not dangerous, it becomes a health risk only when it is airborne. Asbestos workers are the most at-risk for health concerns from overexposure to asbestos and industry standards have been changed to protect them. This all sounds very scary; I mean who wants to put their health at risk over a rock?

Well, put the fear away and keep in mind that though asbestos may create health problems, it’s really only been seen in people who work in industry where there is an overexposure to asbestos fibers and as long as asbestos is sealed, either within the stone or through other means, the health risk is minimal.

Okay, so let’s go to where serpentine is plentiful, beautiful, and the official state rock; California! Since serpentine is formed from rock under high pressure and low heat, we see it a lot in the basalt along the sea floor. In California, the sea floor is being moved and subducted, so serpentine has come to the surface and is under most of the state. You can tell serpentine soil from other soil in the region. Serpentine soil is not very kind to plants and contains a lot of clay, so you can readily see the green stone with very sparse vegetation within it. 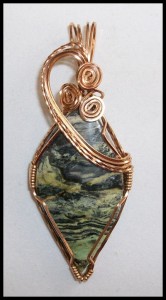 One great area to be able to see and explore serpentine is Mount Tamalpais State Park near San Francisco. If you hike the Simmons Trail, you’ll go right through outcroppings of serpentine, and probably get to see some wildlife, redwoods and other native trees, and enjoy a wonderful day with the family. The views of the Bay are beautiful and the trail is not difficult, so younger children will not have difficulty seeing the beauty and experiencing the California state rock. Check times for the productions at the Cushing Memorial Theater within the park and make sure to check out the “crookedest railroad in the world.” There is a visitor’s center at the East Peak Summit and a refreshment stand, picnic tables, and flush toilets available throughout the park.

Incidentally, California was the first state to designate an official state rock… go California! While you’re there you may want to take a peek at the Golden Gate bridge, tour the historic homes and buildings, maybe brave a drive down Lombard Street, catch a streetcar, sample the wonderful cuisine and diverse neighborhoods and check out the museums and theater district. You can even take a day-trip to Sutter’s Mill and see where gold was first discovered. Mostly though, just enjoy your time in a beautifully diverse state with incredible scenery and a rich history and heritage.

Next week, we’re uncovering a blue-pink-gold stone; what is it? It’s dumortierite! Have you made wire jewelry with dumortierite before? Send us pictures at tips@wire-sculpture.com and they could be featured!