Gem Profile: What is Seraphinite?

I like baking. I like taking different ingredients, especially chocolate, mixing them all together, subjecting it to heat and coming up with something wonderful in the end. Rocks are a lot like baking, and often a lot more interesting than people give them credit for. I love the idea of taking several different minerals, mixing them together, applying water, heat or pressure (sometimes all three) and coming up with something entirely different.

This week we’re mixing Magnesium, Iron, Aluminum and Silicon, subjecting them to some heated water, and coming up with Clinochlore which is more commonly known as Seraphinite (suh-raff-en-ite). 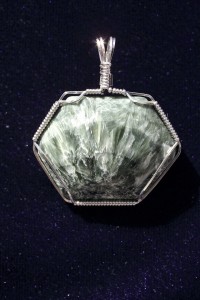 Seraphinite is a beautiful green stone interspersed with chatoyant threads of mica reminiscent of wings. Seraphinite has a vitreous, or glass-like, luster with basal cleavage and is part of the Chlorite group of minerals. The Chlorite group consists of mostly green minerals with seraphinite being one of its only stars; the other is the bright lavender Kaemmererite.

Seraphinite gets its name from the reference in the book of Isaiah in the Bible with mentions of Seraphs or Seraphim, six-winged fiery beings sometimes thought of as snake- or dragon-like, surrounding the throne of God. If you look at a cut piece of Seraphinite, you can almost see wings in the pattern of the stone. 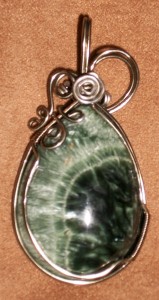 How Seraphinite was Discovered

Seraphinite, or Clinochlore, was first identified in 1851 in West Chester Pennsylvania, though Russian mineralogist Nikolay Koksharov is often given credit for actually discovering the stone. Seraphinite is usually forest green to gray in color and has a hardness of 2-3 on the Mohs scale. Since the stone is so soft, usually only beads or small cabochons are used in jewelry settings. If you do use a larger piece of Seraphinite in a setting, use a bezel or similar setting to protect the stone from breaking if it’s bumped or dropped. 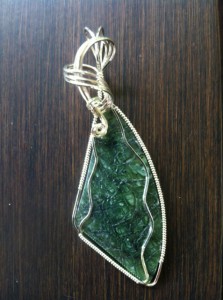 Because of the wing-like inclusions, seraphinite is a healing stone, helping detoxify and strengthen the body. It also aids in weight loss by stimulating the metabolism and can help relieve muscle tension. In addition to physical healing, seraphinite can help release emotional pain and bring enlightenment and balance to the psyche. Placed in the south or southeast areas of a home or room, seraphinite can bring health, financial prosperity, vitality and supports new beginnings in life. 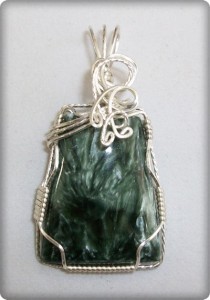 Where is Seraphinite Found?

Road Trip! Though most of the seraphinite on the market today comes to us from the Lake Baikal region of Russia, it has some notable locales in the United States. One of the first recorded finds of seraphinite was in Britton’s Quarry West Chester Pennsylvania. The quarry was originally opened in 1730 with the stones from the quarry used as building material for the many farm houses in the area and several buildings at the University of Pennsylvania among other areas. There are currently no mining operations within the quarry, because two of the three holes are filled with water. The third hole has been opened at times for rock-hounding, but check locally before heading to the quarry to make sure it’s open. 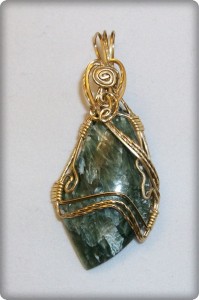 There are some wonderful sights around the West Chester area. Marsh Creek State Park offers up sailing lessons, camping and outdoor adventure for the family, and Philadelphia breathes the birth of our nation with beautiful buildings steeped in history.

Other areas where Seraphinite has been found in North America are the Diablo Mountains of California; Trumbull, Connecticut and the Jeffrey Mine in Quebec, Canada. Though none of these areas offers public access to my knowledge, I’m pretty sure there are plenty of activities and places to visit in the surrounding areas and who knows, maybe you’ll find discover some beautiful Seraphinite in some little obscure rock shop while adventuring on your own road trip! 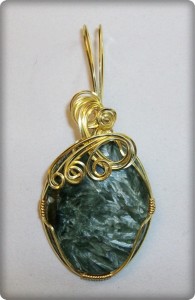 Have you made wire jewelry with serpentine before? Send us pictures at tips@wire-sculpture.com and they could be featured!