I’ve often wondered if I love volcanoes because of the beautiful rocks that come from the process, or just for the simple reason that they explode — it’s kind of a toss-up. I’m leaning more toward the fact that volcanoes, through their incredible power, create spectacular and fascinating rocks. One of the most beautiful and rare among the rocks created from the volcanic process is Larimar. When I first saw a picture of Larimar it reminded me of the scene in a movie where the star is running from an exploding building, and the camera goes to slow motion as the explosion slowly fill the screen. When you look at a piece of Larimar, you see clouds of steam billowing up from a volcano, the finger-like projections of superheated groundwater mixing with the earth to form sodium calcium silicate hydroxide — an explosion frozen in time. 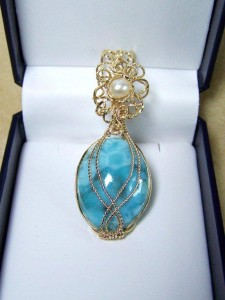 The actual chemical term for Larimar is pectolite, which is found worldwide under various names, one of which we’ve talked about previously: sugilite. Larimar is classified as a blue pectolate with cobalt replacing some of the calcium in the chemical formula NaCa2Si3O8(OH). While blue pectolite has been found in other areas of the world like the U.S. and Canada, only the pectolite from 1 square kilometer in the Dominican Republic can be classified as Larimar. So far it’s the only one with the unique chemical composition and color. 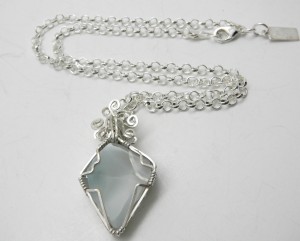 How Larimar was Discovered

Larimar was officially discovered in 1974 by Peace Corps member Norman Rilling and a Dominican man named Miguel Mendez. The two became intrigued by the beautiful blue stones they found along the seashore and found the source of the stone by following the Bahoruco River to a remote area in the mountains. Mendez was given the honor of naming the stone Larimar after his daughter Larissa and mar which is “sea” in Spanish. Although 1974 was the “official” discovery, native Dominicans have known about the stone for generations. 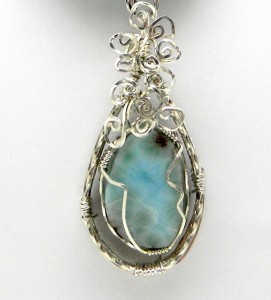 Mining Larimar is very difficult and dangerous. The mines are located in a heavily forested, 1/2-mile-square area of the Dominican mountains. Flooding and rains keep the mines closed up to five months a year, especially during the hurricane season when entire mountainsides can become rivers of mud. Larimar is formed in finger-like veins. Once a shaft is found, the nearby villagers, who have excavated Larimar mines for most of their lives, will dig by hand through the rock hundreds of feet into the dormant volcano to extract the stone. This type of mining, though dangerous, helps to preserve the pristine nature of the rainforest but makes mining and transporting the mined material difficult. 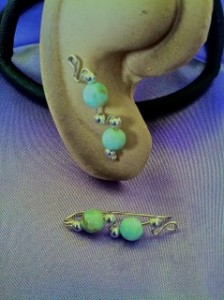 Larimar is also known as Atlantis Stone from a prediction by psychic Edgar Cayce (1877-1945) that a blue stone would be found in the Caribbean possessing incredible healing powers. Many believe Larimar is the stone Cayce spoke about. Hispaniola, the island shared by the Dominican Republic and Haiti, is also believed by some to be a remnant of the fabled sunken city of Atlantis, giving Larimar even more numinous metaphysical power. Larimar brings the wearer peace, balance between head and heart, and protection from negative energy. The stone is also reputed to attract not only success, but one’s “soul mate.” 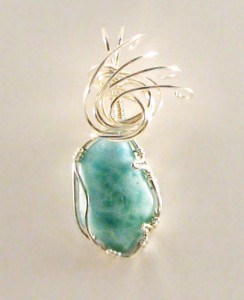 Larimar is a 4.5-5 on the Mohs hardness scale and should be treated with care. Pendants and earrings are the best settings for Larimar. If you decide you just have to have a ring, make a protective setting for the stone. Wire jewelry artist Judy Copeland, whose piece is at the top of this article, forwarded these instructions she received from a purchase of Larimar: “Don’t expose the stone to too much sun or light as the color can fade. If this does happen, you can soak the stone in plain water for 24 hours to restore the color.” Judy said she followed these instructions, and the color was enhanced and even more beautiful than before. 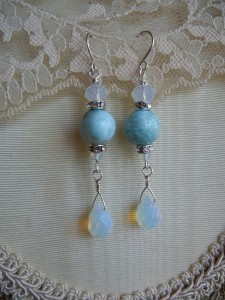 There is not a grading system for Larimar as the color is really a personal preference, but it comes in colors that range from the most familiar sea blue to a deeper greenish blue and even white. I have seen several stones online that are said to be Larimar but are obvious fakes — they don’t have the translucent quality, chromatic graining, and depth that natural Larimar stones have. 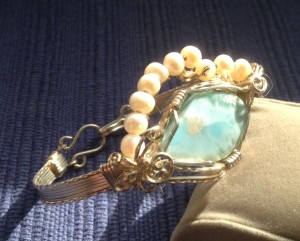 Road trip! Okay, so we are going to the Dominican Republic — pack your swimsuit and some sunscreen! Oh, and don’t forget hiking boots if you want to visit the mines. We’ll start at the Larimar Museum in the country’s capitol of Santo Domingo. The first floor is a gift shop with a small factory where workers make jewelry from Larimar and amber (amber is another stone found in the Dominican Republic). The second floor of the building is a self-guided tour of Larimar’s history, starting from a beautiful mahogany staircase with Larimar inlays. 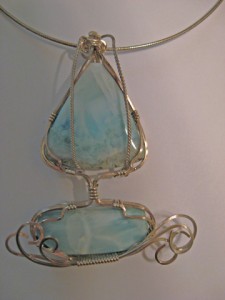 Plan a day for the trip to the mines. Start out in Barahona and travel about 14 kilometers south by four-wheel-drive to Las Filipinas village. You’ll leave the main road, then bounce over a dusty road for about 15 more kilometers until you come to the village of Las Cupaderos near the mines. The scenery is spectacular, and the villagers are friendly. You can purchase Larimar from the miners in either dry rough or rough in jars of water to show the color. 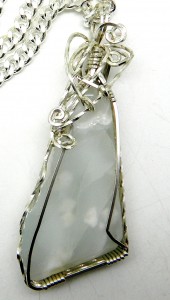 Another pale, translucent larimar pendant by Karen McCoun in silver.

There are several local companies that will even take you there and provide a day-trip and lunch. We’ve visited the mine, purchased some gorgeous stone, and absorbed the natural wonder of a rainforest. I guess the only thing left is to take a dip in ocean waves the same color as Larimar and watch the sun set on another beautiful day spent exploring an amazingly rare gem. 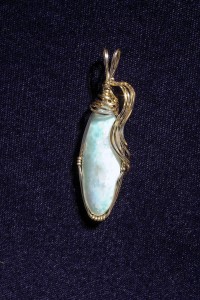 Speaking of heavenly stones, next week we’ll introduce you to Seraphinite, whose feathered swirls are as soft and delicate as angels’ wing. Have you wire wrapped Seraphinite beads or cabochons? Send pictures of your Seraphinite jewelry to tips@wire-sculpture.com and they could be featured in our next Gem Profile.