In a previous Gem Profile we discussed Basalt, that bland black rock that makes up magma and lava, as being the most common rock on the Earth and even found in space. This week we’ll talk about the most common mineral that occurs in both places: Olivine.

Olivine is an olive-green magnesium rich iron silicate that is created within low silica magma at high temperatures and great depths of around 200 miles below the surface of the earth. Olivine is a primary mineral in igneous rock (remember, igneous means magma that is within the earth) and also occurs in metamorphic rock. Olivine will crystallize within the basalt as it cools; this is one way scientists have discovered just how far down magma originates. 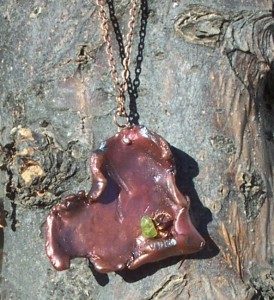 For instance, in kimberlite pipes, olivine is one of the indicator minerals for diamond because the magma raising diamonds to the surface has olivine crystals within which means it originated close to the mantle, but had started to cool before it was ejected through volcanic activity. Olivine has a lot of water within it and has been credited as the “grease,” so to speak, for plate tectonics. It’s estimated that the olivine near the mantle contains more water than the oceans on the surface of the earth!

Olivine lends its name to a variety of rock within the Olivine family which consists of: tephroite, moticellite, forsterite and fayalite, as well as dunite and peridotite (among others). The last name in that list, peridotite, may sound a bit familiar, especially if you’re born in August.

Peridot is the name given to gem-quality olivine. Peridot and olivine are actually the same mineral, peridot just has more clarity than the mineral form and can be cut and faceted with few inclusions and more fire. 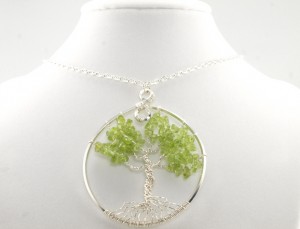 How Peridot gets its Color

Peridot is also an olive-green color, but can also be found in a lighter, almost yellow-green, and sometimes brownish-green. The color comes from the trace amounts of iron found within the chemical makeup of the stone as it bonds with the magnesium. The more iron found within the stone, the darker and browner the stone will appear. The desired color is the bright olive green so many of us are familiar with.

Peridot has been mined for centuries and valued for its clarity and fire even in ancient times. The origin of the name Peridot is difficult to find. Some think it came from the Anglo-Norman pedoretes which is a type of opal, or from the Arabic word fardat, meaning gem, while others point to it having French origins derived from peritot which means unclear (olivine has a lot of cloudy inclusions). Whichever is correct, peridot has been mined for more than four thousand years and has even been listed as one of the stones in the breastplates of the biblical high priests, though it was called topaz or pitdah at the time.

Cleopatra was thought to have loved peridot. And Pliny the Elder wrote about the mining of a green stone on the island of Zagbargad as far back as 1500 B.C. Peridot has also been mistaken for emeralds throughout history with some of the treasures that have been documented as including emerald have been found to have actually been Peridot. Peridot is called the “evening emerald” due to its fire and brilliance even in candlelight or in the dark. 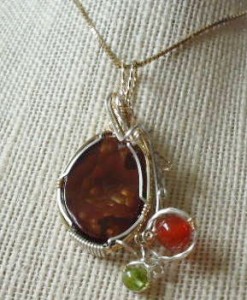 Jane Elizabeth Duke brought this fire agate home from Wire-SCulpture and created a magnificent Argentium and Gold Filled cabochon frame for it, attaching a peridot stone and a fire agate bead to the orbit design.

Where is Peridot Found?

Peridot has been found on nearly every continent and mostly within basalt structures like the Canary Islands, Sri Lanka, Vesuvius, and also in Canada, Hawaii, Arizona, parts of Mexico, and other locales. Most of the peridot on the market today comes from mines in the US on the San Carlos reservation in Arizona, where the stone is dug by hand from weathered basalt. Other notable sources are Myanmar, Tanzania, China, and Pakistan, where a 300 carat peridot has been found. 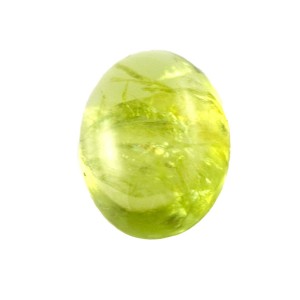 Rose’s favorite color of peridot is a bright yellow-green, like this cabochon – although darker colors are lovely, too.

Where you can discover Peridot

Road Trip! So this week, we’ll start in Arizona on the San Carlos Reservation at Peridot Mesa which is located east of Globe Arizona. This mine has been the primary peridot supplier in the world and an exciting area hosting two different mines. While you can’t mine the stone yourself, you can visit the reservation, take in some history and maybe swing over to Glen Canyon Dam and Lake Powell, see the Grand Canyon and visit the Arizona Meteor Crater. You could also take a trip to Kilbourne Hole in New Mexico where Peridot is also mined. Then catch a flight to the Big Island of Hawaii and visit Papakolea Beach, one of only two green sand beaches in the world! 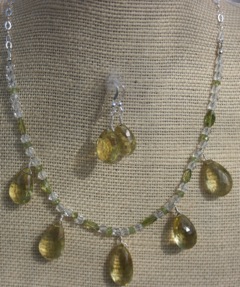 Getting there is a bit of an adventure in itself, but the sand is beautiful grains of peridot and olivine that have eroded from the native basalt. You would literally be walking on gems as you swim, get a tan, and enjoy the beach. I would recommend taking sunscreen to wherever you go to check out peridot, and if you’re hitting the green beach, wear hiking boots and pay a local to take you on the confusing ride to get to the beach, because it will save you time.

Olivine and Peridot: one a mineral that hosts an entire family, the other a beautiful gem prized by so many families. Either way, an important part of our earth’s composition and important to those who happen to be born in August!

Next Friday’s Gem Profile is going to be a CONTEST again – and then I think we’ll take a look at apatite. Check your email around 9am Pacific (12 noon Eastern time) to tune in for a Gem Profile contest!