“Diamonds are Forever” is a phrase you have heard from DeBeers to James Bond, and it fits, because diamonds are the most popular gemstone in the world, the top of the Moh’s hardness scale, and the standard by which so many things are measured.

We have learned how gems and diamonds are graded from previous blogs, and that they are created from pure carbon in science classes, so we’re going to explore how diamonds are formed and their place throughout history instead. 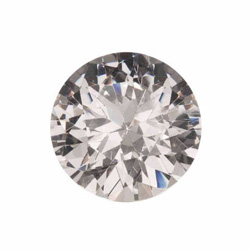 A round, diamond-like clear white cubic zirconia stone – a fraction of the price of a real diamond, and no one would be the wiser!

How a Diamond Forms

Commercially-mined diamonds were first found near Kimberley, South Africa in the 1870s, in what is now known as kimberlite pipes. These pipes are formed by small but violent volcanic eruptions that originate in the upper mantle and form carrot-shaped columns, or pipes, that include diamonds, mantle material, and other rock and indicator minerals that form the breccias within the pipes (breccia is broken material). The shape of the pipe is an inverted cone caused by the surface water exploding as the hot magma comes in contact and literally blowing it out of the Earth!

Dale “Cougar” Armstrong teaches many rings in her Rings DVD Series, including this beautiful CZ stone held in a prong ring.

Kimberlite doesn’t create diamonds; it merely acts as the elevator getting it from the mantle to the surface of the Earth. There is not a specific hardness for kimberlite because it contains so many different types of material like mantle fragments (xenoliths), limonite, olivine, zircon, garnet, chromites, and of course diamonds all suspended in the crystallized magma that acts as glue for the whole mixture. There have been nearly 5,000 kimberlite or lamproite (Another type of diamond-bearing magma) pipes identified throughout the world, but only around 2% of them contain diamonds.

Kimberlite is actually a much younger rock than the diamonds it contains. We have been able to date kimberlite to between 50 and 1600 million years old (depending on location) while the diamonds within it are dated to between 1 and 3 billion years old. In recent years, we have also been able to find microscopic diamonds that have formed from meteor impacts, helping scientist understand the type of heat and pressure needed to form diamonds within our own planet.

We get the name for diamond from the Greek adamas which means unbreakable or unalterable, but were first used in India where they were found in alluvium nearly 6000 years ago and used as religious icons. Prior to their use in ancient India, they were used as engraving tools from nearly as far back as we can find in human history.

The first diamond engagement ring is said to have been given to Mary of Burgundy in 1477, and has gained popularity in adornment and value since.

Robert Boyle, a philosopher and chemist from the 1600s, thought that diamonds were formed from clear water… he would have loved Herkimer diamonds!

Herkimer diamonds are also formed in, but not from, magma vugs in dolomite (remember that a vug is a bubble formed in magma or lava as its cooling). The “diamonds” are double-terminated quartz that is formed in the vug as high silicon content water seeped into the buried rock and became trapped in cavities within the dolomite. As age, glaciers, and erosion exposed the rock over some 400 million years, the dolostone was exposed and Herkimer diamonds were found as they eroded from the rock. 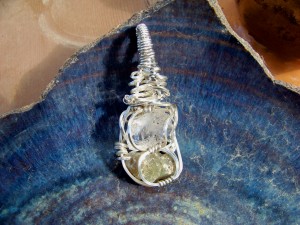 Christine Hurd wire wrapped this pendant in sterling silver wire containing a smokey quartz crystal, a Herkimer Diamond, and an opal from the Welo district of Ethiopia.

The name Herkimer comes from the area where they are found in Herkimer County, New York, which was named after the Revolutionary War general, Nicholas Herkimer. Herkimer diamonds are not diamond, but silicon dioxide and are hard enough to cut glass. They have been valued by the Mohawk Indians and early settlers to the region for protection and beauty.

Herkimer diamonds are characterized by the double-termination, or both ends of the crystal being pointed, and the interesting inclusions that can include minerals, oil, water, and even other crystals. During the Civil War, unscrupulous merchants would sell Herkimer diamonds as real diamonds at inflated prices due to similarities to real diamonds to the untrained buyer who didn’t know their 4 Cs (Carat, Cut, Color, and Clarity).

This type of “diamond” can be found in other localities around the globe, but only the Herkimer diamonds can be called by that name and have a specific morphology (appearance) that is only found in and around the Herkimer New York area. Herkimer diamonds are valued not only for the luster and clarity, but also for their interesting inclusions and the difficulty of liberating them from the hard dolomite cavities in which they hide.

Where to find Diamonds and Herkimer Diamonds

Road Trip! This week we’ll go to Herkimer County, New York where you can camp in either the Herkimer Diamond Mines campground or the Ace of Diamonds Mine and campground. Either one will, for a nominal fee, allow you to mine for Herkimer diamonds. Please bring (or rent) a shovel, hammer, eye protection and wear a long-sleeved shirt and pants (dolomite is heavy and can be sharp when chipped). Look for a vug or cavity that can be split open, or just wade in the stream and find crystals that may have been overlooked by using a sluicing pan. Please be aware of the weather and remember your sunscreen!

And don’t forget, Arkansas’ state gem is the diamond, due to the diamond deposits and kimberlite pipes the state rests on. Take a Road Trip to Crater of Diamonds State Park, where for a small admission fee, the rule is “Finders, Keepers!” Arkansas is the only state in the US to have an open diamond mine available for visitors to dig.

If you’re in the Western US, you may want to travel to the beautiful state of Wyoming and try your hand at mining diamonds as well! While kimberlite pipes and diamonds have been found in Wyoming, they are difficult to get to and really (and I mean really) off the beaten path. If you do travel to Wyoming, it would be more fun to go to Yellowstone, Thermopolis Hot Springs, or Lander where you can visit Sinks Canyon state park and see some VERY large trout. Hike the mountains, maybe take the tram to the top of the Tetons and then drive into Jackson to purchase a beautiful diamond from one of the jewelers there.

So, whether through violent eruptions that bring diamonds to the surface or through precipitation within magma vugs, either type of diamond is both beautiful and interesting.

An end note here; many diamond traders in Africa have not been very scrupulous in the past; please be sure that when purchasing diamonds, that you purchase from ethical sellers who do not knowingly participate in this type of trade.

Next week, we’ll be exploring Peridot, the yellow-green birthstone of August! If you’ve made wire jewelry with peridot or olivine, we’d love to see it! Send your peridot pictures to tips@wire-sculpture.com and they could be featured next week!