Goldstone is made by melting silica (sand), copper oxide, borax, and other chemicals that reduce the copper to its elemental form. When the glass is liquid, the vat is sealed off and all air is cut off from it. This is called an “oxygen reducing atmosphere” which keeps the glass hot enough for the metallic flecks to form, but not melt. 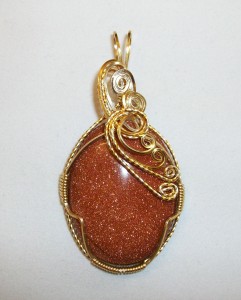 How Goldstone was Discovered

While goldstone is glass, the origins are a little sketchy. Legend has it that an unknown religious order of Italian monks accidentally spilled copper shavings into a vat of melted glass, while others have the same monks trying to make gold and coming up with goldstone instead… busy monks. 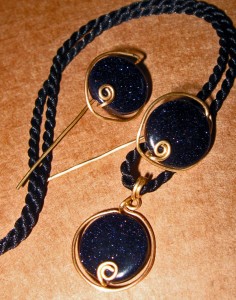 However, ask a Venetian glass maker and they will tell you that the Miotti family invented the process in the 17th century and was granted an exclusive license to produce it, which is the most plausible and historically-verifiable story. The process was an exclusive and highly guarded one, up until the nineteenth century when the Miotti family stopped making glass and the formula was sold to re-start the goldstone tradition. 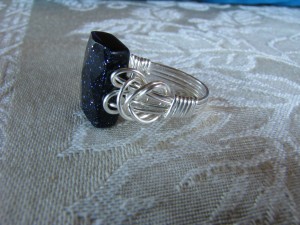 Linda Pope made this Blue Goldstone bead the focal point of a wire wrapped ring, in non-tarnish silver wire.

Here’s an interesting fact; goldstone is also known by the name aventurine glass from the Latin word avventura (avventurina in Italian) meaning chance. It’s also sometimes called sun stone and monk’s gold. Aventurine, the macrocrystalline quartz, was named after aventurine glass because of its resemblance to goldstone.

Being the history buff that I am, I got curious about the Latin word avventura and how it related to glass, so I did a little digging and found some interesting things about glass in ancient Greece and Rome. Some of the first glass we find in history comes from Roman glassmakers who developed the method of blowing glass to replace the heavy molded glass funerary containers, and brought glass into the homes of the ancient people. It was due to this blowing method that the Romans and Greeks had nice window panes in their homes, and we have glass tile mosaics to restore today! 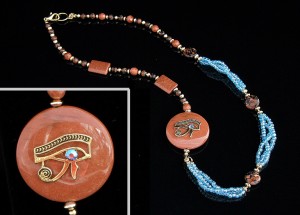 I found a reference to Haematinum from Pliny the Elder. He described this glass as blood red (oxblood-ware) with tiny flecks of copper suspended within the glass.

Okay, so that got me thinking, so I found several other references to this same thing. The process for making Haematinum, or purpurin, was lost through the centuries, because glass makers are not very forthcoming with their recipes. But speculators think that copper salts mixed in the glass and cooled over time would have allowed the copper to precipitate within the mixture, making the glass red, yet having flakes of copper suspended within it…sound familiar? 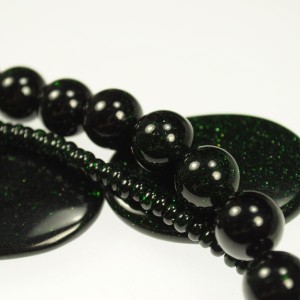 If you ask me, goldstone was most-likely an “avventura” discovery by the ancient Romans and re-discovered by the Miotti family, then passed on to today! 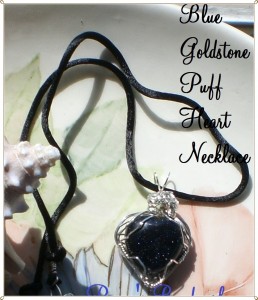 Goldstone, with its colored history, comes in various colors as well. The most familiar is the red-brown, but we also have blue, purple, and green. 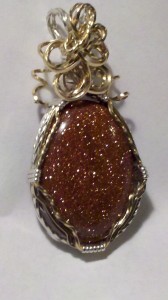 Purple and blue goldstone are made the same way only with cobalt or manganese, giving the flecks a more silver appearance, while green is made with chromium oxide, creating light green flecks.

So, even though goldstone isn’t really a stone, or made of gold, it is a beautiful product with a colorful and rich history behind it – thanks to the Miotti family, and to the ancient Romans, for their “avventurina” in glass-making. 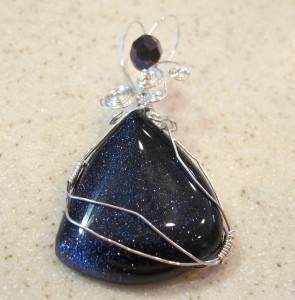 Next week, we’ll be exploring Diamond, the birthstone of April! If you’ve made wire jewelry with Diamond, we’d love to see it – as well as wire wrapped clear CZ or Herkimer diamond jewelry you’ve made, too! Send pictures to tips@wire-sculpture.com and they could be featured next week!