So, I have been sitting her singing “Molly Malone” to myself as I’ve been writing this week’s Gem Profile. Why, you ask? Because this week we’re learning about Mother of Pearl. Okay, so maybe “Molly Malone” doesn’t really relate to Mother of Pearl, or MOP as we sometimes abbreviate it, but just wait and you may be humming along with me soon. 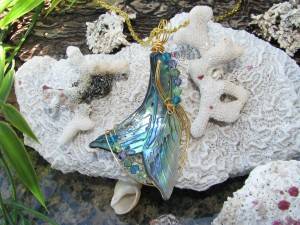 Linda Pope wrapped this abalone shell, carved in the shape of a fish tail, in gold-plated wire, embellished with Swarovski crystals. Linda Calls it “Whale of a Tail”!

Pearls and Mother of Pearl

MOP is the inner lining of the shell of a mollusk that protects the little critter from bacteria, disease and helps to reinforce its shell against damage. To better understand how Mother of Pearl is formed, let’s take a look at the development of the mollusk and the shell in which this soft bodied invertebrate lives. 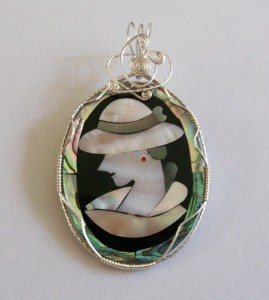 How Mother of Pearl Forms

The mollusk starts life in a soft shell that is a rounded oval called an umbo. This tiny animal quickly starts to outgrow the umbo and secretes nacre to expand its home. The nacre forms in concentric rings, like tree rings, then thicken outward as the animal within gets bigger. I wish I could do this with my home; five teenagers definitely need more space!

The outer layer of the shell is called the peristacum and is the first layer to form around the animal. This organic layer of conchiolin, is made of keratin proteins similar to our skin, but are dark brown, black or blue and are very hard. 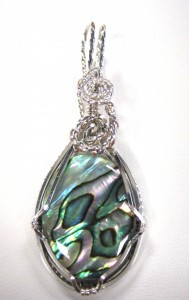 The next layer to form is the ostracum which is formed of tiny hexagonal crystals made of calcium carbonate in the form of aragonite. These crystals line themselves up parallel to each other and are held together by the conchoilin. The aragonite layer gives the flexible protein layer stability, and the concoilin layer helps prevent the aragonite from fractures, making the shell very strong. Even though these two layers are chemically the same as the nacre layers, they are formed differently and are the outside of the shell.

Next is the final hypostracum layer, or Mother of Pearl. It is formed in the same way as the outer shell, only the layers of aragonite are not parallel to each other and are thinner than the ostracum. This layer is formed similar to a brick wall with very thin “mortar” or conchoilin gluing the aragonite bricks together. 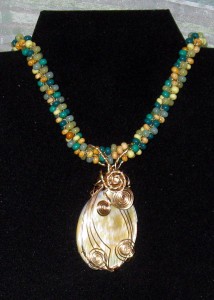 Because the aragonite in this final layer is platelets rather than crystals, it is transparent and mimics the wavelength of visible light.  This means that some light is reflected while other light is absorbed, making the MOP iridescent. The word iridescence comes from the Greek word for rainbow, which is iris.

What Mother of Pearl Comes from

Some of the mollusks that give us Mother of Pearl are gastropoda, bivalvia, and cephalopoda. Those include mussels, conch, paua, abalone, and other shells like the nautilus. Some shells, like paua and abalone, have beautiful banded nacre while others, like the nautilus, have a smooth MOP layer with little or no banding. Mother of Pearl makes beautiful jewelry and can be dyed to many fun colors that we’ll talk a little about in the next week or so. 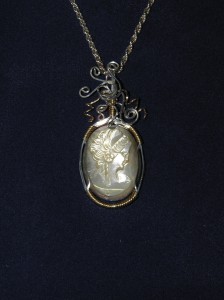 How to Care for Mother of Pearl

Care for your MOP the same way you would pearls: no acid, no steam or ultrasonic baths, and be careful around objects that could scratch the surface. MOP is about a 3.5 hardness and can scratch fairly easily. 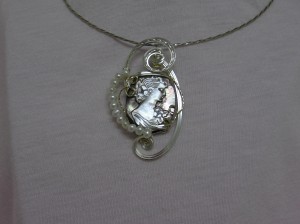 Now you probably know why I’ve been humming “Molly Malone” all day: well it’s because of the cockles and mussels creating Mother of Pearl of course!

Whew, now that we’re done with the biology lesson, I’m excited to talk about the shells and where they come from in the next couple of weeks!

Have you wire wrapped shells before? Abalone, paua shells, shell beads, shells you’ve found on the shore? Send pictures our way at tips@wire-sculpture.com and they could be featured!