Purple is one of my favorite colors and always has been. Purple comes in many exciting, relaxing and fun shades from the muted purple in my bedroom that brings a feeling of calm to the neon purple we all used to proudly wear in the 80’s. Spring also brings us beautiful Lavender crocus and violet blooms to the fun dyes on Easter eggs. It’s a versatile and wonderful color. There are several gems and stones that are naturally purple, and many that are dyed purple, two stones that are naturally purple in color are Lepidolite (le-PID-a-lite) and Sugilite (SOO-gel-lite).

Lepidolite, or Lithium Mica, is made up of potassium, lithium, aluminum, silicon, oxygen, fluorene, and hydrogen. It’s an uncommon purple mica with a hardness of only 2.5 – 3, rather soft, with perfect cleavage in one direction, and can have a crystal structure that varies from small and scaly to a large mass with small glittery crystals. Lepidolite is mostly found in granite pegmatite bodies that are high in lithium, and is classified as a phyllosilicate mineral. Its color is a grayish purple with a pearly luster. 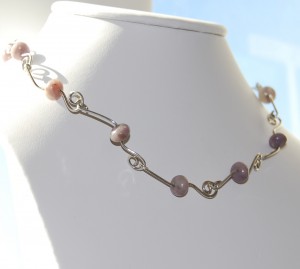 Lepidolite is an igneous rock, meaning that it is formed within the earth and is found in veins within granite, usually along with tin. Due to the thin layers that make up Lepidolite, it is a very flexible mineral that will bend, but not break. Lepidolite is found in Africa, Brazil, Russia, and the United States. If you want to see some Lepidolite up close, San Diego, California has some wonderful Lepidolite, and great weather! Other localities around the U.S. are Colorado, Maine, and South Dakota. 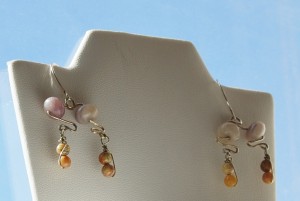 Now to the more neon, or “grape jelly” colored mineral Sugilite. Sugilite was first discovered in Japan around 1944, on the island of Iwagi, Shikoku, Japan by Ken-Ichi Sugi, a Japanese petrologist. Note: Dr. Sugi’s name is pronounced “soo-gee”, with a “gee” like “geese” – so technically, the stone is supposed to be pronounced “soo-gee-lite”, but at any gem show, most people will call it “soo-gel-lite”, with a “gel” like “jello.” The specimens found in Japan were a yellow-brown color with no gemological value. Another deposit was later found in South Africa that is the bright purple more popular for jewelry-making and collectors. 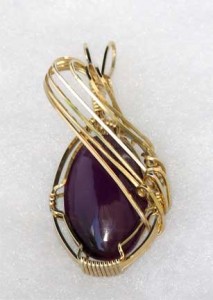 Bonnie DeHart’s husband Jerry cabbed this Russian Sugilite, and Bonnie wrapped it into a pendant in 14kt gold-filled wire.

Sugilite has a fairly complex chemical formula, made from potassium, sodium, iron, manganese, aluminum, lithium, silicon, and oxygen! It forms as an intrusive inclusion along with other inosilicates and is a member of the cyclosilicate mineral family. Sugilite has a hexagonal prismatic crystal structure, but due to the odd crystal structure is generally not cut into gemstones. However, it does have a hardness of 5.5 – 6.5, and cabs really well.

To care for your sugilite, use lukewarm soapy water, then rinse well. Keep it away from steam, sudden temperature changes, and ultrasonic cleaners.

This sugilite pendant by Sherry Luke is wrapped with shining sterling silver wire.

Most of the Sugilite that is found is an opaque deep to lighter purple that can be “marbled” with lighter colors of yellow, white and even black. Very rarely, a translucent specimen is found, but these are so rare that they are generally found only in museums or the display cases of very wealthy collectors. 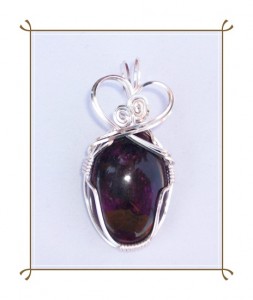 Sugilite, though becoming more available in the market, is not readily available for large purchases due to the difficulty of mining the wonderfully purple gem-grade stones from where they lie 3200 feet below the surface in South Africa. They are also found in Canada, Italy, Australia, India, and Japan, though not the same quality as those in South Africa.

Flower Sugilite and other Trade Names

Some lepidolite on the market today is sold under the trade name “flower sugilite.” This is lepidolite, not sugilite. Also be careful of sugilite jasper (it’s likely jasper) and purple turquoise (real sugilite can have a black matrix like turquoise, but it shouldn’t be called turquoise – there’s no such thing as purple turquoise). 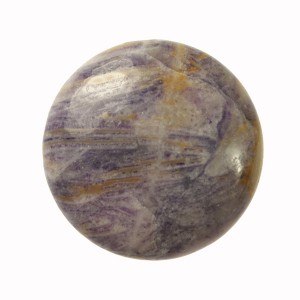 Flower sugilite cabochon, which is lepidolite.

Lepidolite is also known as the “peace stone” and is used in healing pain and is beneficial in helping people with nerve and joint problems. Lepidolite is also said to help in setting and realizing goals, protecting the wearer from negative outside influences, relieving stress and promoting restful sleep. It also has the reputation for driving away negativity and attracting good luck.

Sugilite is a love stone representing both spiritual love and wisdom. It helps to open and align the chakras to love and protects the soul from hurt due to love. It can also help eliminate hostility and aid in forgiveness, relieve spiritual tension, and bring light to difficult situations. Sugilite is also thought to alleviate headaches when held to the forehead and encourages positive thoughts, giving the wearer strength in facing difficult or unpleasant situations.

Next, we’re going to be talking about shells! Abalone, paua shells, shell beads – all sorts of treasures from the sea. Have you wire wrapped shells before? Send pictures our way at tips@wire-sculpture.com and they could be featured!