Who doesn’t love a great car? The “new car” smell, the iconic designs, the beautiful paint in a rainbow of colors, and the pleasure of taking a wonderful machine on new and exciting adventures. The automobile has been the standard of the American culture for more than a century, and we still love our vehicles! Personally, I love fast cars… you know, the ones that set land-speed records and sound like a growling jet engine… but alas, I drive a mini-van. Until the kids are grown and gone, I will substitute my “need for speed” with a great roller coaster ride, but I digress. 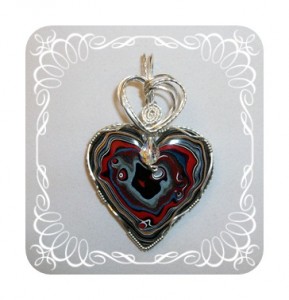 Instead of talking about our favorite models and makes of cars, let’s talk about the paint. Automotive paint is one of those small things that is taken for granted, yet we tend to choose a vehicle based on the color of the paint even more than the color of the upholstery! When Henry Ford first started rolling his products off the assembly line, he was asked what colors the vehicles came in. He replied, “Any color you want, as long as it’s black!” The painting process at this time was very time-consuming and tedious taking several days to paint, with a brush, each layer of black lacquer and allow it to dry. The workers at Ford Motors would rub the entire chassis down with pumice between each layer as well. This process often caused a bottle neck at the factory and slowed production. There had to be a better way. 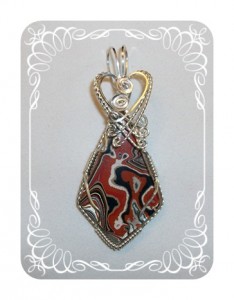 In 1924, DuPont, in conjunction with General Motors, developed a nitrocellulose paint lacquer that dried fast and came in several colors, the most popular of which was blue. They also developed a sprayer for the paint virtually eliminating the brushing process for painting. This was still an air-dried lacquer, but it was a faster process and sped up production at the factory. New paint came in the 1930s that was enamel instead of lacquer and it was baked on the the car’s frame. This paint lasted longer and retained its shine better over time. The automobile was mounted on an assembly stand and pulled into the painting room, sprayed by a person and baked in place, then pulled down the line for further assembly. The paint overspray on the walls and assembly stands would also be baked in place, making a very hard, thick product. 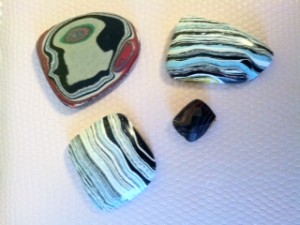 These Fordite cabochons are courtesy of Becky House.

Over time, the layers of paint would build up and make it difficult to pull the car chassis through the painting process and the workers would chip the paint off the metal sleds and walls. In the 1960s and 70s, acrylic paint was introduced that was more durable and weather-resistant than the enamel being used at the time, creating a buildup of vibrant colors in defined layers on the overspray. Workers noticed this material building up, and they would clear it away and take it home, forming it into shapes. Voila…Fordite, or Motor Agate, was born!

Fordite is not really a gemstone, but the buildup of layer upon layer of acrylic enamel paint that has been baked over and over again, making it very hard and durable. 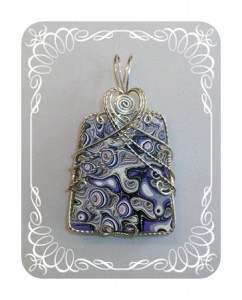 This purple, black, and white Fordite cabochon almost looks like birds-eye rhyolite, with the many small eyes! Wrapped by Joan Madouse.

The lapidary process for Fordite is similar to other stones, though care does need to be taken since it is in such defined layers and may have hairline cracks from the removal process at the factory. I couldn’t find any information about the hardness on Mohs scale, but it is a medium-hard material with some earlier specimens being a little softer due to the composition of the paint. That’s recycling! 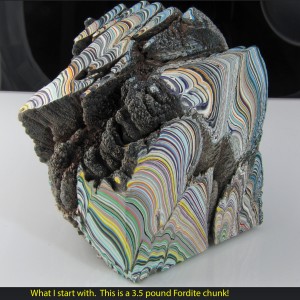 Lee Zimmerman kindly allowed us to show you this image of Fordite rough, one that he has used to cut cabs from.

You may be wondering as to the lead content and safety of the paint. The paint is an acrylic material that does contain lead. Lead is absorbed into our bodies through breathing, our mucus membranes, ingestion, and occasionally through cuts or scrapes. However, inorganic lead that is contained in paint is not easily absorbed through our skin, even through a cut or scrape, so unless you are going to eat it, there is really no danger in wearing a piece of Fordite. 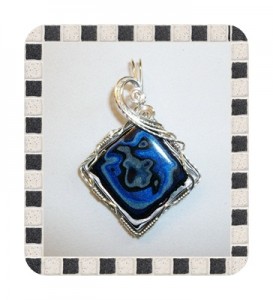 Joan Madouse wrapped this blue Fordite diamond-shaped pendant in sterling silver-filled wire. It could nearly have a bit of druzy in the middle!

There are several different types of Fordite some having separated colors and regular banding with a primer layer in between while other are color on color with metallics and limited color ranges. Add in the color from drips and swirls most likely from the walls and floor of the painting rooms, and you have very neat patterns.

Where is Fordite from? 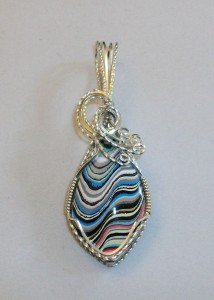 Great Britain has some beautiful specimens that not only have the opaque colors, but metallic and transparency to some of the layers too. Detroit Fordite, although not necessarily from Detroit, is American in origin and usually has a gray primer layer between the vibrant colors. Ohio Fordite is another American original and comes from the factories that painted vans, so the colors can be earth-tones of green and brown or the more vibrant colors of the 70s with yellow, orange and bright blues. 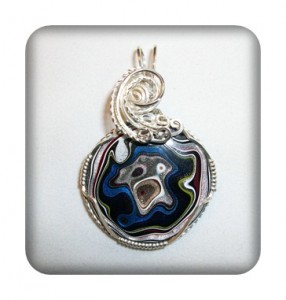 This Fordite piece, wrapped by Joan Madouse, almost looks like it could be a thunder egg!

Why Fordite is a Collector’s Item

Automobiles are no longer painted in this way today, because the painting process is automated and the chassis charged to attract the paint molecules, so there is virtually no waste. Because of this, Fordite is a finite material that is quickly running out, but what a great piece of automotive history! (PS: if you dabble in polymer clay, check out Dee Wilder’s faux fordite here!)

Next week, we are going to be having another contest… but this time, we’re adding a trivia section! Watch the blog next Friday morning (Pacific time) for the quiz. You could win Wire-Sculpture.com gift certificates!