This week, we’re going to explore a material that is a stone, a gem and a color; Turquoise! This remarkable stone is one of the oldest known gemstones in use for jewelry-making in the world beginning with beads found in Iraq that date to 5000 B.C. to the death mask of Tutankhamun and has also been found in burial sites dating from 3000 B.C. Turquoise was also worn by ancient Persians and Aztec Kings with finds of inlaid skulls, and ceremonial masks. 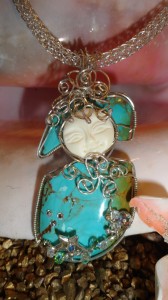 Emilie Jefferson belongs to a lapidary club, and as she was polishing this turquoise stone she cut, it broke. So Emilie finished polishing it all the way around, and wrapped both pieces in sterling silver wire! Called Moon over the Horizon, the moon face is made from carved yak bone.

What does Turquoise Mean?

The word Turquoise is an Old French word meaning “Turkish” which is where the Europeans first found the gem mined from the Khorasan Province in Iran for sale in the bazaars of Turkey. Although Turquoise is the word we’ve used for several centuries, Pliny the Elder called it Callais, the miners in Iran searched for Priouzeh, and the Aztecs carved their power statues of Moctezuma from Teoxihuitl.

The Colors of Turquoise

The most prized color of Turquoise in antiquity, and now, is the intense blue most commonly associated with Turquoise as a color, but is very hard to find naturally in a stone. In ancient times, the best mines producing the finest colors of turquoise were found in Persia, but in the late 1800s, miners re-discovered Aztec mines in Arizona and the Western United States. The turquoise from these mines rivaled any found in Persia and exceeded the quality in many cases. Today the United States has become the largest producer of gem-quality turquoise with the finest specimens being from Arizona, and Nevada. The color of the stone comes from copper, and varies depending on the concentration of copper in the chemical formula. Turquoise that is greener in color has a higher concentration of iron.

Marcia Kertel created this Kokopeilli necklace from sterling silver and both raw and tumbled Turquoise from New Mexico.

Chemically Turquoise is made of Copper, Aluminum and trace amounts of Iron in what is called a “hydrous phosphate”; its chemical formula is Cu(Al,Fe3+)6(PO4)4(OH)8 x4H2O. Turquoise is a very soft stone ranging from 0 – 6 on the Mohs’ scale with most of the stones falling in the 5-6 range, or about as hard as the glass in your windows. It has a perfect cleavage and conchoidal fracture with crystals being rare to form in the stone.

Turquoise forms as a secondary mineral by percolation through acidic aqueous solutions where the primary rock is volcanic with high levels of limonite, iron oxide and copper. In other words; water, which has been heated under the earth, rises upward through limonite rock and creates turquoise in the cracks and crevasses of weathered rock. This occurs in arid regions like the American Southwest and the Middle East. As a side note: Turquoise is mined in Arizona, New Mexico, Colorado, Nevada, and California…all over the southwestern US except Utah, which is known for our copper mine! That’s okay, though, we have Variscite – and we’ll talk about that a little later. 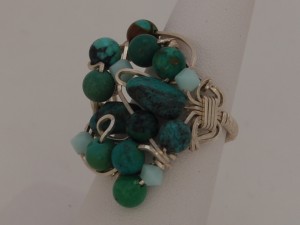 Speaking of mining, the most famous copper mines in the world are found in Arizona with the Kingman and the Sleeping Beauty mine being the most well-known. However, we can’t leave out Blue Bird, Castle Dome or Ithaca Peak. Nevada is the other major producer of high quality turquoise in the United States where the turquoise is found as nuggets in fractures and as breccias. Most of Nevada’s mines are along a thrust fault that runs through the northern part of Elko County extending southward to the California border. Nevada turquoise comes in a variety of colors from the intense blue that is so sought after to greens and yellow. California, Colorado and New Mexico also produce beautiful gems with some of the oldest mines being in New Mexico. 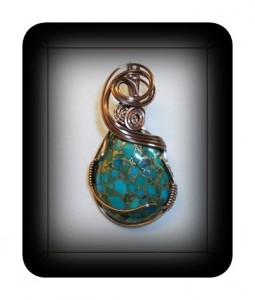 There are several great websites for planning a trip to any of these mines and some of them are open to the public for tours and to purchase product produced and cut at the mine. There are also several museums in Arizona and California which have exhibits of stone hammers and tools used by ancient peoples to mine turquoise. A cache of Hohokam and Navajo hammers from around 600 A.D. was found in the Kingman mine along with charcoal and skin water containers. Very cool! These items are on display at the Mohave Museum of History and Arts and the Arizona State Museum in Phoenix. 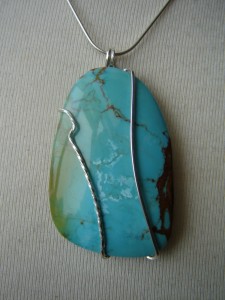 The Aztecs have a legend that when the rains came, the people rejoiced and danced. As their tears of joy mixed with the rain, the water soaked into the earth and created the “sky stone.” Turquoise is still used as a stone of power by the Indians of North America believing that it opens a direct connection to the sky and is used in the sacred bundles of the medicine man because of the healing powers they possess. 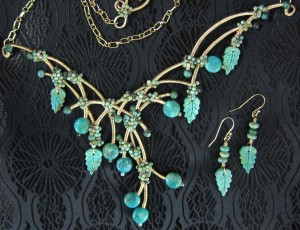 “Abundance,” by Frances Lediaev, features a multitude of turquoise beads.

From ancient times, turquoise has been used and valued as a stone of power Turquoise is the stone of the Archangel Michael who symbolized protection, courage and truth. Turquoise was also used in Persia as a stone of protection and healing, with a legend that the person who was wearing turquoise would be protected from harm and an animal, like a horse, wearing it would be sure-footed and carry the rider safely.

Turquoise can change color over time and should be protected from extreme heat, cosmetics and should never be tumbled or placed in any type of ionic or ultrasonic cleaner. To prevent color changes and reinforce the soft stone, many suppliers stabilize their turquoise. Stabilization is a very guarded secret among miners, lapidary and suppliers, but is used to harden the stone and make it last through generations…we’ll go more into that process next week. 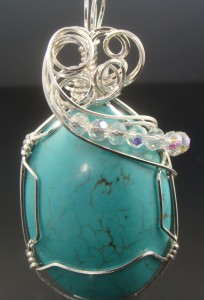 Gail Maas found this turquoise cabochon in Old Town Alexandria, Virginia, and wrapped it into a wire pendant, accenting with crystal beads.

We’ve just scratched the surface of turquoise! Tune in next week for more – and if you haven’t sent in pictures of turquoise wire wrap jewelry you’ve made, send it in and you could be featured! Email tips@wire-sculpture.com to send your turquoise photos in.