Last week we explored space and some space-age technology a little with Moissanite so this week we decided to come back to earth and talk about Zircon (zer-kone). This little gem is often under-rated because it sounds so similar to the man-made Cubic Zirconia, a young trendsetter in the gem world. Zircon and CZs are related in only the sound of their names, and that they both have zirconium as one of the chemical compounds. Zircon, which is chemically considered zirconium silicate, is classified as a nesosilicate and has a 7.5 hardness on Moh’s Scale.

Most of the Zircon crystals we see are small and in fact the major component in sand. When the crystals are large enough though, they make beautiful gemstones. Clear Zircon, which goes by the trade name Matura Diamond, has a high refractive index that rivals a diamond. This clear gem has been mistaken for diamond by some jewelers! 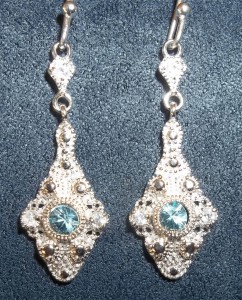 Zircon also comes in blues, browns, pinks, yellows and greens which are created through natural radiation decay in the crystals. Because of the popularity of some cherished zircon colors, particularly blue and clear, some gem suppliers will heat or treat other shades of natural zircon. This will give the zircons their desired clarity and color.

In the ancient world, zircon was called hyacinth – and some still call it by that name today. The colors listed for Hyacinth include yellow, orange, and red. So if someone is trying to sell or show you a hyacinth stone at a gem show, now you’ll know that it’s a zircon.

In addition to being a versatile gemstone, zircon also has some really neat geological properties. Because zircon likes to hold on to trace amounts of uranium, and because uranium decays at a known rate when exposed to lead, geologists use zircon crystals to date rocks by finding the age of the zircon within specific specimen! Scientists have found this method to be even more accurate than radiometric, or carbon, dating methods. In fact, using this method, scientists discovered that the Jack Hills in Western Australia, which supplies about 37% of the zircon on the market, are among the oldest minerals on earth and date at nearly 4.4 billion years old!

Overall, zircon is seen as a calming, peaceful stone. Zircon is said to promote inner peace, keep one centered or grounded, attract love, relieve stress, and clear the mind. Colorless zircon was considered magical by ancient people and was often worn as a talisman for protection, for healing injuries, and to help in managing pain. Zircon makes another ancient appearance in a Hindu poem about the Kalpa tree, with Zircon as its leaves. Zircon is mentioned twice in the Bible: first in the breastplate of Aaron in Exodus, and then as the foundation stones of Jerusalem in Revelation. Depending on your Bible, it may be called jacinth or hyacinth, which were alternate names for zircon in ancient times, referring to the color.

So, what about that pesky little problem of some people thinking that Zircon and Cubic Zirconia are the same? Well, Cubic Zirconia, or CZ for short, is a synthesized material often used as diamond stimulant. It gets its name from the fact that cubic zirconia forms in cubic crystals of zirconium dioxide (ZrO2). Cubic zirconia stones are flawless, nearly as hard as diamond, and have a fire and refraction very similar and under UV light, a CZ will fluoresce where a diamond will not. (So if your diamond glows at the tanning salon, we may have a problem!) Like Moissanite, CZs are created in the lab. Please remember, the term is cubic zirconia, not cubic zirconium. 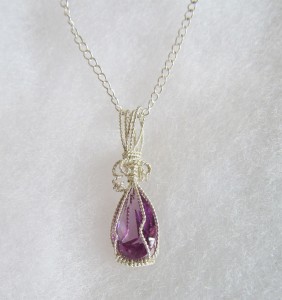 One note, for convenience here on Wire-Sculpture, we call CZs "stones" – as in, they are cut, lab-grown stones – but we try not to call them "gems," to avoid confusion with amethysts, topazes, and other naturally-grown gemstones. How you choose to describe them to your customers and friends is up to you!

Naturally-occurring zirconium oxide in the form of baddeleyite (BAD-y-lite) was discovered in 1892. This primitive form was primarily used in the ceramics industry – that is, until lasers came into the picture during the 1960s. Because lasers use crystals, the scientific community needed a source of inexpensive, single-crystal crystals to use in the experimentation and production of lasers. Research started in France and continued in the former USSR, where a scientist developed a specific techniques for growing the crystals. 30 years ago, labratories were creating about 50 million carats, or 22,000 pounds, of cubic zirconia a year – just imagine how many are created and added to jewelry today!

Besides the hardness and perfection of cubic zirconia stones, the rainbow of colors CZs can form in is extremely desirable for jewelry-making. The CZ manufacturer creates this rainbow by adding coloring agents to the substance that the crystals are grown from. Much like flame tests in chemistry classes, where different elements produce different flames – strontium red, titanium brilliant white – the element added to the source powder determines the color of the final product. 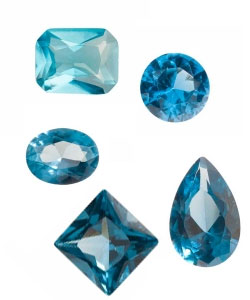 Cubic Zirconia and the Metaphysical

Do CZs have any metaphysical properties? Well, one source mentioned using cubic zirconia as an aid in meditation by concentrating on the fire within the stone. Another spoke source about how she used the CZ for healing muscle fatigue and reiki healing. Most sites, though, classify the clear CZ as being neutral, because it is man-made with just a trace amount of energy coming from the colored CZ stones depending on the mineral used to color it.

So, the next time you see a beautiful fiery stone labeled Zircon, please don’t confuse it for the equally fiery stone Cubic Zirconia. Know that they may sound similar, but are very different in both occurrence and creation.

Next Friday’s Gem Profile is going to be a CONTEST again – and then I think we’ll take a look at turquoise. West Coast, it went well last time, so check your email around 9am PST (12 noon Eastern time) to tune in for a Gem Profile contest!