The Gem Profile for this week starts with a question: what do Arizona, North Carolina, and outer space have in common? If you answered a beautiful, near-colorless stone that is commonly mistaken for diamond, you would be correct! 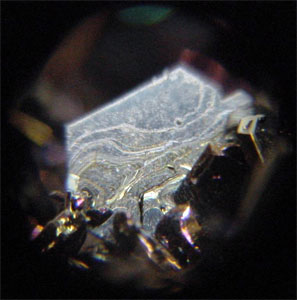 History of Moissanite:  From a Meteorite to a Star

In 1893, Henri Moissan was exploring the Arizona desert, poking around the meteor crater in Canyon Diablo, when he found some tiny stones he thought were diamonds. He took them back to his lab and began to study them and in 1904 identified them as pure silicon carbide (SiC), not diamonds. This was a significant discovery because up until 1950, no other source of pure silicon carbide had been found on earth. Pure SiC was later renamed moissanite (pronounced: MOY-suh-nite) by Tiffany & Co’s George Kunz (of Kunzite fame) in 1905, to honor Henri Moissan.

Even though moissanite was discovered in 1893, because of how rare and small the crystals were at Canyon Diablo, it would take a century and an enormous amount of scientific research before moissanite would enter the market as a gemstone.

Nearly a hundred years after Moissan’s discovery, CREE, a company in North Carolina, developed the process for creating Moissanite in large, individual crystals in the 1980s – intending to use the crystals in electronics. Then a master diamond cutter saw the moissanite crystals in 1995 and wondered how they would look as a faceted stone: this was the event that really set the course for moissanite the gemstone. Three years later, Charles & Colvard Ltd. introduced the new gem to the world, becoming the one company on Earth to hold the patents to the process of creating jewelry-grade moissanite.

Moissanite has a hardness of 9.5, which makes it nearly as hard as diamond, and also has needle-like, sometimes even string-like inclusions. What differentiates moissanite and diamonds is not only the chemical structure, but also the fire and brilliance.

While diamonds are beautiful and sparkly, moissanite is even more so. Moissanite is 10% more brilliant than diamonds, and more brilliant than any other gemstone, because of its refractive index of 2.65-2.69. Plus, moissanite’s "fire," or the pretty flashes of color it sends out, is 2.4 times greater than a diamond’s of the same cut! Moissanite is not graded on the same system as diamonds, using the "Four Cs", but moissanite stones are considered VS (very slight inclusion) and are sold by the carat weight.

Moissanite is spiritually neutral and isn’t considered to have any metaphysical properties. Although, given the fire and brilliance of the stone, it sure does make a girl happy, and at 1/3 the cost of diamonds, it makes a guy happy too! So, while diamonds may be a girl’s best friend, moissanite is a more affordable and sometimes even more beautiful alternative.

Next Friday’s Gem Profile is on zircon. If you’ve had the fortune to wrap zircon in wire, in any color, please send pictures to tips@wire-sculpture.com, and they could be featured!