Today’s Gem Profile is Sodalite.  No, I’m not talking about a new fizzy diet drink, but a blue stone that is named for its relatively high Sodium content.  In addition to Sodium, it also contains Aluminum, Chlorine, and Oxygen, has a hardness of 5.5-6 and is a member of the Sodalite group along with Lazurite.  It can be classified as feldspar, but lacks quartz structure. That’s why sodalite is better-suited for cabochons and beads rather than faceted stones. 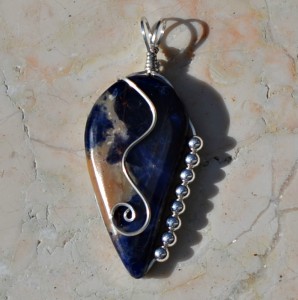 Sodalite is generally streaked white with Calcite and can range in color from royal blue, to purple green and white.   Because of its blue color, Sodalite is often used as a substitute for Lapis, but lacks Pyrite and is a Royal Blue rather than Ultramarine.  One way to tell Lapis and Sodalite apart is through a streak test.  Lapis will streak blue, but Sodalite will streak white. 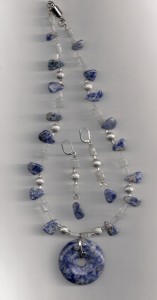 Sodalite was first discovered in Greenland in 1806, although it took a Glasgow chemist, Professor Thomas Thomson, to name the stone. The British commissioned him to identify it from a captured shipment being sent from Greenland to Denmark during the Napoleonic Wars. 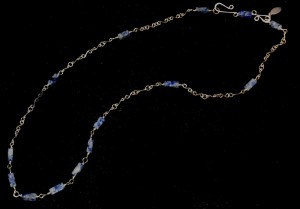 Sodalite went relatively undiscovered in the ornamental stone world until 1891 when a large deposit was found near Ontario Canada by Frank D. Adams during a geological survey.  As the stone gained popularity, Princess Patricia of England visited Ontario and fell in love with the stone and chose it as an interior decoration for the Marlborough house in England.  Because of this, many people started calling Sodalite “Princess Blue.” Sodalite has also been called “Canadian Blue stone,” “Bluestone,” and “Canadian Lapis.” 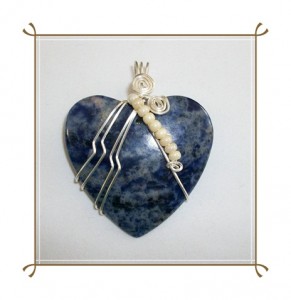 Joan Madouse used silver craft wire to wrap this 52mm sodalite heart into a pendant, accenting it with ivory beads.

In addition to Greenland and Ontario, there have been deposits found in Bolivia, Brazil, Burma, India, Namibia, Portugal, Romania, Russia, and parts of the United States.  The Smithsonian has a beautiful sample of Sodalite from Litchfield, Maine.  In fact, Litchfield’s city seal features Sodalite, which was called “Litchfeildite” for some time prior to the 1890s, when it was discovered to be a form of Sodalite. 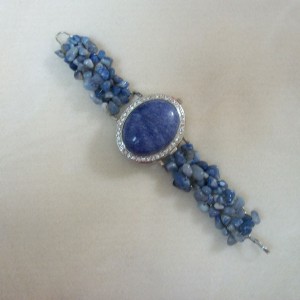 Sodalite is said to be a gemstone of the throat chakra, and is associated with the thyroid.  It is also said to have healing properties that are said to bring calmness to the mind, enhance truth and objectivity along with emotional balance, and some say sodalite can even calm panic attacks, boost self esteem, and prevent insomnia. 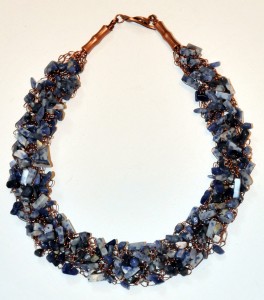 Sodalite is a very versatile and beautiful stone, from beads and cabochons in jewelry to tile, flooring and even countertops in the building trades.  If it’s a beautiful royal blue stone…it’s probably Sodalite.

Next Friday’s Gem Profile is on aragonite. Have you made wire jewelry with Aragonite beads or cabochons before – in cream, brown, as part of a fossil, or any other type of aragonite? Send your Aragonite pictures to tips@wire-sculpture.com, and they could be featured!