You learned last week that copper is the big element that sets turquoise apart from magnesite.  Today’s stone, howlite, is made of Calcium, Silicon, Boron, Hydrogen, and Oxygen, but no copper here, either. Like magnesite, howlite loves to absorb dye, especially turquoise-colored dye, to give us the look of turquoise without the high price.

"How"ever, turquoise isn’t the only stone that howlite likes to dress up as. Howlite may be dyed red to resemble red coral, or blue to resemble lapis lazuli. And howlite is still valued in its natural white state, with its gray and black veins, which sometimes may be slightly brown. Magnesite veins are more typically tan or cream, which is a way to differentiate the two similar stones.

Howlite was named for Henry How of Nova Scotia, who was the first geologist to describe the mineral, in 1868. In the mine, you might find howlite crystals, which may be transparent to cloudy brown, as well as opaque. Opaque howlite is typically cut into beads or cabochons, rather than faceted like a translucent gemstone.

Howlite is found in Newfoundland, New Brunswick, and Nova Scotia, Canada;  Nevada and California, US; Mexico; and in some parts of Europe, including Germany, Turkey and Serbia. (I was surprised to finally find a stone that’s not listed in Brazil – but perhaps the list was incomplete!)

When howlite isn’t being formed into beads and cabochons, it is carved into ornaments or the boron in it is extracted for industrial use. Like magnesite, howlite rates about a 3.5 on Moh’s scale, which is fairly soft, and softer than real turquoise, which has a hardness of 5-6. Some samples of crystalline howlite, however, were found to be as hard as 6.5 by minerologists in Nova Scotia (source) – practically as hard as quartz! 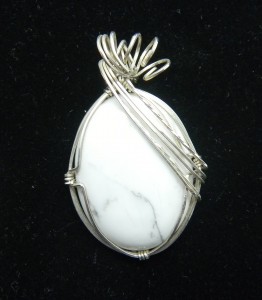 Karen McCoun wrapped this howlite cabochon into a beautiful pendant.

Possibly because of its coloring, or because of its calcium makeup, howlite is thought by some to aid in healing of the bones and teeth. Howlite is said to soften a critical, selfish, or rude nature, and provide a calming influence. Some metaphysical believers attribute howlite with memory enhancing strengths.

Next week, on Friday, I think it’s time for another contest! And I’ll attempt to make this more fair for our West Coast friends: the post will be live at approx. 10am Mountain Time (12 noon Eastern). Watch your email for details!