Kyanite ("kI-ah-nIt") is often translucent with some opacity. While kyanite is named after "kyanos," the Greek word for blue, kyanite can be pink, yellow, white, gray, and even green-blue with patches absent of color.  Some mineralogists guessed that titanium impurities gave kyanite its blue hue, but others think that iron might be responsible. Orange kyanite has been found in Tanzania, where manganese particles caused the coloration.

Kyanite is made of long, flattened crystals which can create chatoyancy in rare specimens, so some kyanite has a cats-eye effect, although not all of it. In rare circumstances, kyanite can be pleochroic (like iolite and tanzanite), meaning it can display different colors in different lighting. For pictures of kyanite’s range, click here

Kyanite was spelled "cyanite" by mineralogists in the 1800s and early 1900s, which is the French spelling. Kyanite was given its name by Abraham Werner in 1789. Kyanite is related to andalusite and silimanite, and of the three, kyanite forms under the highest pressuer. It is often found along with garnet and corundum (ruby and sapphire).

Kyanite has also been called blue talc and sappare. Excellent-quality deep blue kyanite without many inclusions can resemble sapphire, so much that a Swiss mineralogist, Saussure, misidentified a specimen as sapphire (sappare) in France. Despite realizing the mistake, sometimes kyanite is still called sappare. On rare occasions, you may see "disthene" refer to blue kyanite, as opposed to "rhaeticite" for white and gray kyanite.

Kyanite is made up of aluminum, silicon, and oxygen, with its scientific formula being Al2(SiO4)O. While good kyanite is highly rare and valuable, there is no real "synthetic kyanite" on the market. If you see this label at a gem show, beware! Fake kyanite might actually be blue quartz or glass. 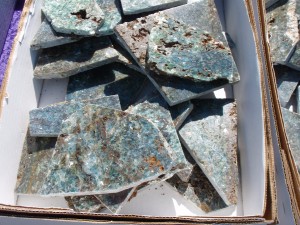 Kyanite slices, each about the size of my open hand, that I found in Tucson last year - click to view larger. Check out the variety of color and depth of color, too.

Softer than Sapphire, but Harder to Cut

Kyanite is also very brittle. Because kyanite is prone to cracking, jewelers typically reserve this stone for earrings and pendants, saving the rings and bracelets for more durable stones. Kyanite jewelry should be stored by itself, such as in its own pouch or box, to keep it safe from being scratched or bumped. All this means that kyanite is fairly easy to identify, but also, it means it’s challenging to cut into gem-quality stones. 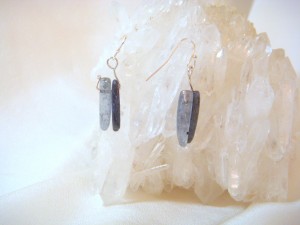 Kyanite can be cut into faceted gems when it has translucency, or shaped into cabochons with either translucency or opaqueness. Faceting kyanite stones is difficult not only because of the stone’s makeup, but also because translucent kyanite specimens that are large enough to cut down  are very rare – they are much more common in very small sizes, 2 carats at most. Michael Schramm, a kyanite importer, estimated only about 1-2% "of all kyanite rough is suitable for faceting."

While translucent, faceted kyanite stones the color of sapphires are few and far between, there is plenty of mid-grade kyanite to go around, often found at gem shows in beads and cabochons in a denim to sky-blue color. Often, in kyanite cabs, you can see the dark blue patches glide along the needle-inclusions of the stone.  Because kyanite is so directional, almost like a plank of wood, due to its long, almost fiber-like crystalline makeup, kyanite beads are more often found in flattened and long oval shapes.

The best kyanite presently comes from Nepal and Tibet. Other sources of gem-quality kyanite include Brazil, Kenya,  the United States, and Russia. Lesser-quality kyanite, which is fairly abundant across the globe, is often used in ceramics, spark plugs, electronics, and abrasives. 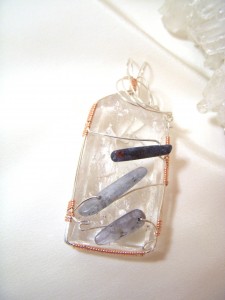 We’re going to take a break from blue gemstones. Next Friday’s Gem Profile is on hematite, and I am looking forward to see how you’ve used hematite in your wire jewelry. Send your hematite pictures to tips@wire-sculpture.com, and they could be featured!