Bronzite is a variety of enstatite that is also associated with hypersthene, which contains silica, magnesium, oxygen, and iron; this is similar to the structure of the serpentine group of minerals. (Bronzite has more iron than enstatite and more magnesium (and less iron) than hypersthenes). The high amount of iron (up to 20%) is what distinguishes it from its relatives.  From a distance, bronzite can resemble brown tiger’s-eye, or even a piece of metal, but the stone’s surface reveals a rock freckled with brown, gold, and black (iron or hematite) patches.  Depending on the rough material and how it is cut, bronzite can have a cat’s-eye chatoyant effect, or a weathered pearly sheen. 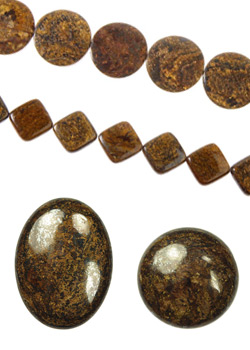 Examples of Bronzite cabochons and beads. Bronzite is a shiny golden-brown stone with lots of visual texture!

Where Bronzite is Found

Bronzite has been found on every continent, including Antarctica! However, the Antarctic samples weren’t mined — bronzite is one of several iron-containing minerals that make up meteorites, and they were found in a 1988 study of meteorites in Antarctica! (For those wondering, yes, there is land under Antarctica’s ice, but the 1959 Antarctic Treaty, signed by 49 nations, prohibits mineral mining.)

Notable deposits of bronzite have been found in Brazil, Africa, England, Greenland, Japan, Norway, Sweden, and North America, especially New York. Labrador, Canada, also the source of the fantastic stone labradorite, is known for hypersthene with a  chatoyant effect. The hypersthene is quarried from cliffs or washed up on the shore (along with labradorite).  Hypersthene is sometimes confused with hornblende, another mineral, hence the joke-name hypersthene received: it’s Greek for “over strength.” Hypersthene is harder than hornblende, so its name kind of says “this is the harder one”!

A slightly different, hydrated form of bronzite which is even more like serpentine, can be found in green or brown color — this bronzite is called baitite of schillerspar. This is found in the Harz, the highest mountain range in northern Germany.

Bronzite, which is opaque, never transparent,  is usually cut into cabochons or shaped into beads. Bronzite is rarely faceted, due to its opaque nature. It’s only become known to collectors in recent decades, growing in popularity recently. 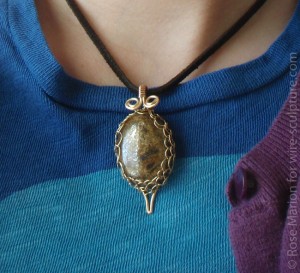 Bronzite in Jewelry and Bronzite Meaning

Bronzite is softer than quartz, with a Moh’s Hardness of 5-6, but is still durable enough to hold up in most kinds of jewelry, including special-occasion rings. Due to its bronze color, this is a good stone for both feminine and masculine jewelry designs. Simply wipe with a moist cloth to clean this material.

Bronzite is associated with the Leo zodiac sign, and is associated with a large number of metaphysical benefits, including bringing confidence in oneself and one’s judgments, as well as aid in seeing the “big picture,” making business decisions, and relieving stress.

Next Friday’s Gem Profile is on kyanite. Have you made wire jewelry with kyanite cabochons or beads before? Send your kyanite pictures to tips@wire-sculpture.com, and they could be featured!