The Discovery of Tanzanite

Tanzanite was discovered by a tailor in Tanzania, named Manuel d’Souza, in July of 1967. On July 7th, Manuel was prospecting for gold near Lake Victoria, when he found a blue stone laying on the ground, which he thought might be sapphire, September’s birthstone. After testing, ruling out sapphire, olivine (peridot), and dumortierite, the stone was correctly identified by Ian McCloud, a government geologist. McCloud recognized the gem as a form of zoisite, and a new name for this variety of zoisite popped up: Skaiblu, a Swahili take on the English color of the stone, "sky blue." 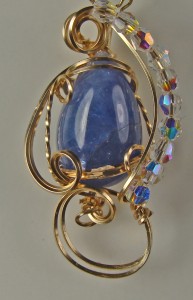 Tanzanite has a beautiful deep blue-purple hue, but that’s not how it starts: early every tanzanite on the market has been heated to create the blue hue. Originally, the rough stone is a rusty brown, which is then heated to 550 to 700 degrees Fahrenheit to bring out the beautiful blue-violet shade. After being heated, the stone is expected to be dichroic, similar to iolite’s colorplay, so that the stone is seen as blue in some circumstances and purple in others, although never colorless.

There is a legend among the Maasai, or Masai people, one of the largest tribes in the region, that Masai herders noticed the stone 3 decades before d’Souza: they found that brown zoisite crystals had been heated by wild prairie fires started by lightning, and the heating process had turned the crystals a deep blue. Masai men gave their wives Tanzanite jewelry after the birth of their first child, a tradition that tanzanite dealers encouraged foreign buyers to adopt, too.

Tanzanite on the Market

Tanzanite is a variety of zoisite (a calcium aluminum hydroxy silicate), with a hardness of 6.5. Tanzanite is officially called blue zoisite, but Tiffany & Co.’s Henry B. Platt, the great-grandson of Louis Comfort Tiffany, coined the term tanzanite, knowing its value and rarity would only increase. The stone was officially launched at Tiffany’s in October 1968, with the campaign, Tanzanite is only found in two places in the world: "Tanzania and Tiffany’s." Demand is still high today just as in the 1960s, with sales of tanzanite reaching approximately $500 million a year in the US alone!

Tanzania was formed in 1964 from the states Tanganyika and Zanzibar, and is located in central-east Africa. Tanzania is home to the famous Mount Kilimanjaro, the highest peak in Africa, as well as Lake Victoria, Arica’s largest lake, and Serengeti National Park.

While it is nowhere near as controlled as diamond, Tanzanite is considered to be the first colored stone whose supply and distribution are controlled similar to the diamond cartel run by DeBeers, which severely limits the amount of diamonds on the market. The Tanzanian government has nationalized the Tanzanite mines, and forbidden the export of rough to India, so that mainly Tanzanians can cut the gems, because India is home one of the largest gemcutting productions in the world. TanzaniteOne is the leading company in Tanzanite production, and is working on increasing its large control over mining, cutting, and distribution of tanzanite. 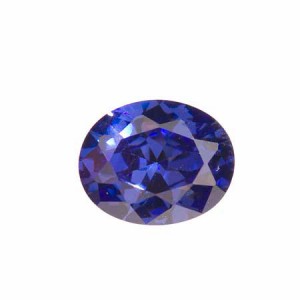 This cubic zironia matches the color of tanzanite at a mere fraction of the cost.

Unlike diamonds, which are fairly abundant, the supply of tanzanite truly is scarce – some say it is 1000 times rarer than a diamond – and some sources have estimated that the mines will play out within 10 to 15 years. When people tell you Tanzanite is found at the foot of Mt. Kilimanjaro, they aren’t just being poetic! Tanzanite truly is found in only about a 4 square kilometer area near the base of that famous mountain.

While tanzanite was discovered in Tanzania and that is the only recognized location, other interesting forms of zoisite come from nearby Kenya, such as Anyolite, and Norway, such as Thulite. Also, zoisite in Tanzania can also be found in rare supply with intense pink, green, orange, or yellow color, although this is not called tanzanite.

Since tanzanite is a 6.5 on Mohs scale, it’s a solid stone but not recommended for jewelry that could be bumped or scratched, such as rings, and it’s important to clean it gently: don’t use an ultrasonic or steam cleaner. Simply clean with a soft brush and warm soapy water, and store away from other jewelry that could scratch it.  Also, while a good tanzanite would not have inclusions or air bubbles, be sure not to change its temperature quickly, because that could cause fractures or cracking.

Quality tanzanite has no inclusions visible to the naked eye; tanzanite that has visible inclusions to the eye is sold at much lower prices.

Tanzanion, according to Mindat.org, is a "trade name for co-doped synthetic Mg2SiO4…synthetic forsterite….of intense purplish-blue color." Forsterite is a member of the Olivine (Peridot) group. It’s a little interesting that a stone that people originally thought tanzanite to be, olivine, is now being man-made to simulate tanzanite! 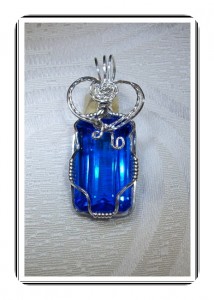 Some sellers have a material called tanzanite quartz, which is likely amethyst (quartz) that has been enhanced to a deep blue- purple color. This material would be harder than tanzanite.  Also, there have been cubic zirconia stones created to imitate tanzanite’s beautiful hue – and cubic zirconia typically rate about a 8-8.5 on Mohs scale. Also, you may come across tanzanite aura quartz, which would be a type of aura quartz that has been vapor treated with chemicals to achieve a blue-purple coating on the original quartz crystal.

Tanzanite is the first stone to be added to the AGTA Birthstone list in 90 years, being assigned to December as the modern birthstone, in October 2002.

Next Friday’s Gem Profile is on Tourmaline. Have you made wire jewelry with tourmaline or watermelon tourmaline before? Send your tourmaline pictures to tips@wire-sculpture.com, and they could be featured!