Iolite comes from the Greek "ios" for "violet", meaing violet stone, and is also found labeled as "water sapphire." Iolite is gem-grade cordierite, which is found all over the world. Corderite was found in 1813, and was named after a French geologist, Louis Cordier. Cordierite is often found in the same location with  garnet, kyanite, andalusite, and other gem minerals. Iolite is pleochoric, which means that it can show different colors at different angles, especially under different polarized light. A well-cut iolite will show a beautiful blue color through the top of the stone, but it may appear violet, yellow, or colorless from a different angle!

You can see the difference between the deep blue and the violet colors visible in the exact same gemstone in this photo, which is property of Didier Descouens.

Iolite is made up of magnesium, aluminum, and silicon (chemically, it’s known as magnesium aluminum silicate) and also sometimes has iron. Iolite rates a 7 to 7.5 on Mohs Scale, making it a tough stone, but the sources I read, including AGTA, cautioned to keep iolite gems away from high-traffic zones where it could get bumped or hits. This advice means iolite would be best for pendants and earrings, and not a good choice for bracelets or rings.

Iolite is found in several locations, including Brazil, Burma, India, Sri Lanka, and Africa. There is also a large deposit of iolite in Wyoming, discovered by Dan Hausel, a geologist at the University of Wyoming. He estimates that that area may contain over a trillion carats of iolite, in addition the gemstones he’s already uncovered, weighing over 24,000 carats each – wow! According to Hausel, this may make Wyoming home to the largest colored-gem deposit in the world. 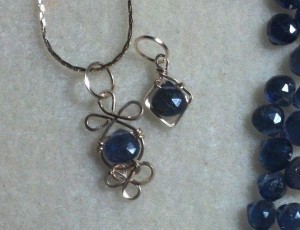 The Vikings are said to have mined iolite in Norway and Greenland, and while it hasn’t been proven, iolite is a candidate for the unknown stone called the Viking Compass, or the Viking Sunstone (used to locate the sun hidden behind obscuring mists – which also obscured perilous rocks and shorelines). Legend is that the Vikings used a gemstone to find their way in the frigid, foggy, northern waters. Iolite is said to guide lost sailors, and iolite is treasured as the stone for the 21st wedding anniversary.

Other blue-violet stones such as sapphire and tanzanite are more popular, but iolite can typically be found at a similar or often much-lower price. To care for iolite, a simple cleaning with warm soapy water and a toothbrush will remove any dirt or grime.

Next Friday’s Gem Profile is on Tanzanite. Have you made wire jewelry with tanzanite before? Send your tanzanite pictures to tips@wire-sculpture.com, and they could be featured!