One of the recent finds of the 20th century, Morganite was first discovered and recognized on an island off the coast of Madagascar, and then also found in Pala, California, along with tourmaline and kunzite. Deposits since have been found in Brazil, Mozambique, Namibia, Russia, and Afghanistan, but it is still regarded as a rare gemstone. A beautiful beryl gem, morganite features a pink-to-peach translucent color (see a photo of a cut morganite gemstone here). 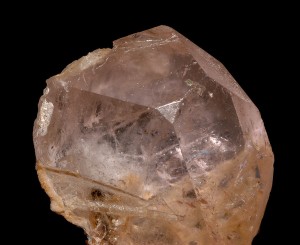 Called pink beryl until it was given the name morganite, this gem is named for a millionaire whose holdings still make news today: J.P. Morgan, the bank tycoon and avid gem collector. Morganite was given its honorary name by George Kunz, who held many jobs at Tiffany & Co. including mineralogist, buyer, and eventually vice president . Kunz who depended greatly on J.P. Morgan, his biggest benefactor. (Kunz’s namesake stone is Kunzite, a pink-light purple gem form of the mineral spodumene – Kunz was the first to describe kunzite, in 1902). While Kunz suggested the name, the New York Academy of Sciences was the organization to officially name this stone morganite. Besides pink beryl, some other names for morganite are rose beryl, pink emerald, and cesian beryl.  The pink in morganite is thought to come from traces of the element manganese in the stone. 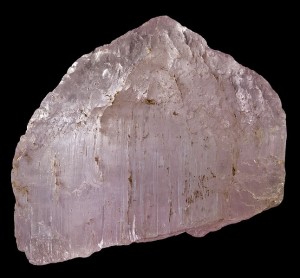 One of the most famous morganite specimens is "The Rose of Maine," found on October 7, 1989 at the Bennett Quarry in Buckfield, Maine, weighing just over 50 pounds, including its matrix! This piece was about 9 inches long and 12 inches across.

Morganite can have slightly yellow or salmon-colored patches (and the yellow can be improved with irradiation), but red beryl is seen as a separate stone, not under the morganite umbrella. Red beryl was called "bixbite" for a time, but this is discouraged because there is a different mineral, a rare dark crystalline gem named "bixbyite," causing confusion! Red beryl has also been called red emerald or scarlet emerald, and was first described in 1904 in Juab County, Utah. It is also found in other locations in Utah and New Mexico, and is extremely rare. Another reddish beryl, pezzottaite, is seen as another separate stone (also called raspberry beryl or raspberyl), and it’s found in Madagascar and Afghanistan. While "raspberyl" and red beryl may have a similar color, they conduct light differently through the gem, which is how a mineralogist can determine the difference between the stones.

Unlike emerald, morganite is typically free of inclusions and quite hardy. To care for morganite gem, remember that it is a beryl like aquamarine, rating above quartz in hardness on Moh’s scale, about 7.5-8, so it is safe for everyday wear, even in rings. Simply clean with mild dish soap and a soft toothbrush to keep a morganite gem dazzling.

Metaphysically speaking, morganite is associated with the heart chakra and can aid in attracting love as well as balancing emotions and increasing compassion and empathy.

Next Friday’s Gem Profile is on Iolite, the gem form of cordierite. Have you made wire jewelry with iolite before? Send your iolite pictures to tips@wire-sculpture.com, and they could be featured!