Emerald is a variety of beryl, like aquamarine, and its green color comes from the element chromium and sometimes vanadium. While beryl has a hardness of 7.5-8 on Mohs scale, but like aquamarine, emerald often has many inclusions, hollow or filled, which can make it prone to cracking or breaking. Emerald can be found in its translucent natural hexagon-shaped crystal columns, as well as in calcite matrix and in opaque green. 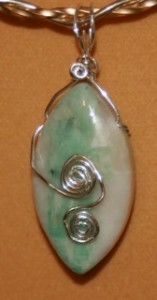 Batya Morris wire wrapped this emerald in matrix bead into a reversible pendant.

To improve emerald’s clarity, most emeralds are oiled with cedar oil or a synthetic oil or polymer, after the stone is cut. This is viewed as a traditional practice in the gem industry, and valid; using an oil tinted with green coloring would be deceptive.  However, if you are buying a high-quality emerald, the industry encourages emerald sellers to disclose any treatments when asked, even traditional oiling. 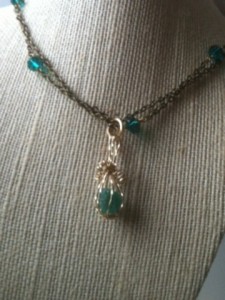 Emerald is one of the old “precious gemstones,” in the system of precious versus semi-precious stones that dates back to 1858. The original precious gems included Ruby, Emerald, Sapphire, and Diamond, and sometimes Pearl. (As a side note, the colored stones were regarded as more valuable than diamond, because diamonds were abundant – not yet controlled by the cartel!) Semi-precious stones would have included nearly any other gem used in jewelry, including peridot, turquoise, aquamarine, amethyst, and lapis lazuli. Now, with the worldwide gem trade, greater scientific understanding, and the discovery of even more “precious” stones – such as alexandrite, tanzanite, and tsavorite – than the original group, the major gem industry groups encourage avoiding the terms precious and semiprecious. 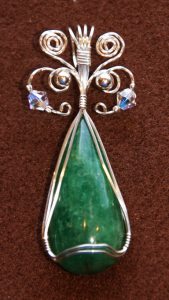 In the ancient world, emeralds were mined in Egypt, India, and Austria. In modern times, Colombia is the largest producer of emeralds, about 50-95% of the world’s production, and has been increasing in the last ten years. Behind Colombia are Zambia, Russia, Germany, India, Madagascar, Australia, and many other countries. However, as the grade of mined emerald is not always as good as desired, emerald is still seen as rare.

While efforts began to simulate emerald in the mid 20th century, especially in enterprises in California, most of the world’s synthetic emeralds currently come from Russia. These emeralds have a similar chemical makeup to Colombian emeralds, thus they are called “Colombian Created Emeralds” or “Tairus Created Emeralds,” Tairus being the producing company. 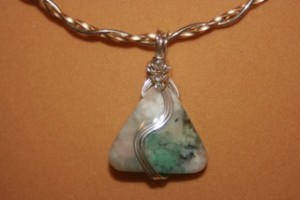 Batya Morris wire wrapped this emerald in matrix cabochon into a reversible pendant.

Emerald is the May birthstone. Emerald is also the traditional stone for the 35th wedding anniversary, as well as an alternate for the 20th. Metaphysically, emerald is said to encourage loyalty, unconditional love, unity, and friendship, and emerald is also said to strengthen memory and mental focus.

Next Friday’s Gem Profile is on Morganite, also called pink beryl or pink emerald. Have you made wire jewelry with morganite before? Send your morganite pictures to tips@wire-sculpture.com, and they could be featured!