Onyx comes from the Greek word for nail. Nail? Yes! While many of us think of the color black when onyx comes up, onyx is a variety of chalcedony that can be banded like agate, or have white, black, or even green and other colors present! And onyx is named not for its black characteristics, but for the white onyx that looks like a white fingernail! In fact, the Ancient Roman legend is that when Venus was having a manicure, her fingernail clippings fell into the river, sank, and became onyx stones. 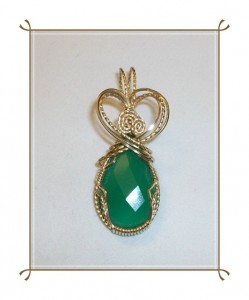 Onyx is made of quartz and moganite, a member of the silica oxide chalcedony family, and onyx’s color simply comes from the minerals it’s surrounded by. Sardonyx is a variety in which the stone features red-colored bands, rather than white or black. The red banding is sard, which we discussed along with Carnelian.  Onyx does bear resemblance to agate, but it is typically more opaque than translucent agate. 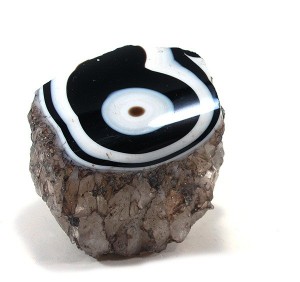 You can clearly see the white and black onyx in this pillar, which is actually formed alongside quartz crystals!

While black onyx does exist in nature, it is much more rare than sardonyx, colored onyx, and agates. In fact, black onyx has been imitated since the 1st century AD, with Romans soaking or boiling chalcedony or agate stones in sugar solutions, then treating the stones with acids to blacken the sugars absorbed into the top layers of the stones. This technique is still used today, as well as dyes. However, this means that if you come across black onyx that has white bands or stripes, it’s most likely completely natural! 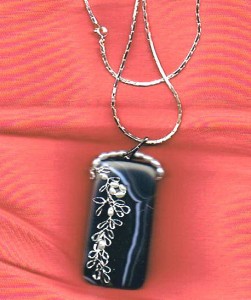 Onyx was valued in ancient Israelite history, as it is mentioned along with other stones and gold in the Bible in Genesis, Exodus, 1 Chronicles, Job, and Ezekiel.

Many ancients used onyx since ancient times in carvings and in jewelry: onyx is commonly found as the background in old cameos.  Also, onyx enjoyed celebrity status along with jet in the mourning period of the Victoria, following the death of Queen Victoria’s husband, Prince Albert, in 1861. The Queen’s mourning was so severe it lasted until her death in 1901. Edward VII, her successor, and his wife Queen Alexandra, were absolutely beloved by jewelers and fashion designers when they came to the throne and returned color and sparkle to jewelry and clothing: while onyx is beautiful, can you imagine black mourning garb being the monarch-supported celebrity trend for 40 years! 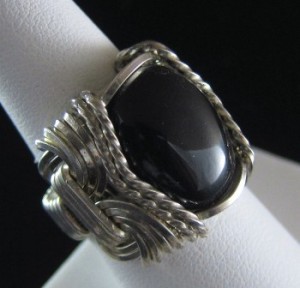 In modern times, onyx has been found in Scotland, Canada, the US, Madagascar, India, Germany, Czech Republic, Russia, China, and Brazil. 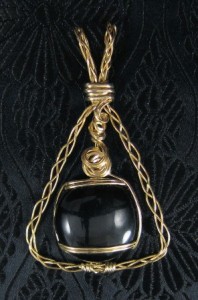 Astrologically speaking, onyx, specifically black onyx, is the birthstone for Leo. Metaphysically, onyx is said to encourage one to take responsibility for self-improvement, as well as self-mastery; it’s associated with determination as well as protection.

There’s only 1 more stone I’m going to cover that’s related to the great Chalcedony & Quartz family: Sonora Sunrise. Have you made wire jewelry with the multicolored Sonora Sunrise? Send your Sonora Sunrise pictures to tips@wire-sculpture.com, and they could be featured!