Psilomelane, also rarely called psilomelanite and black hematite, is an umbrella name for manganese oxides, which are black stones. The name was chosen in 1758 and comes from the Greek for "smooth" (psilos) and "black" (melas – like melanin gives a dark pigment). I’m sure you’ve seen this stone if you’ve been to Tucson or any large gem shows: psilomelane looks like a black, almost metal, slice of wood. Gem-quality psilomelane, often called crown of silver psilomelane or silver crown psilomelane, is polished so you can see silvery "wood grain" or "tree rings" on a jet-black background. Some people even call it "black malachite," although the two stones aren’t related.  The name comes from the Silver Crown Mine that it is found in, in Chihuahua, Mexico, which has been open rarely in the last 100 years, closing due to WWII and multiple cave-ins. While there was much mining in the 1950s and some in the early 2000s, it is still a rare find on the lapidary market. 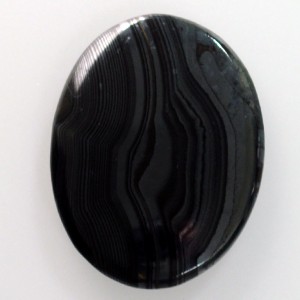 The silvery portions, which can look black, silver, or blue depending on the angle of light, are made up of pyrolusite, which is a different manganese oxide. Pyrolusite is used in making other alloys, creating chlorine, and used in disinfectants, taking green and brown tints out of glass, and in calico printing and dyeing. It is not magnetic, despite its hematite-like appearance. It can even be used in batteries, although artificial substitutes are more common. 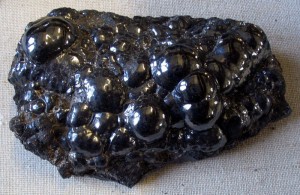 Here is a picture of that shiny pyrolusite covering a botryoidal formation.

Psilomelane is softer than quartz, about a 5 to a 6 on Mohs scale. It’s often found in grape-like botryoidal formations, but you can see this unusual psilomelane sample that formed with black hair-like crystals on the top. That’s a very close-up look: the crystals are less than a quarter-inch tall!

Besides the Silver Crown Mine in Chihuahua, Mexico, there aren’t many active centers of gem-grade psilomelane mining. Augusta County, Virginia once had a mine, Crimora, which is now abandoned. Psilomelane has also been found in Arizona, New Mexico, Montana, and Arkansas in the US, and in small pockets of Europe, Africa, Asia, Australia, and Europe.

Sometimes you will see psilomelane stones that have clear parts between the "grain," even druzy sometimes. (See an example here, courtesy of GreatRough.com) This clear area is chalcedony, and some call it manganese oxide in quartz. Chalcedony psilomelane can turn into beautiful cabochons.

Metaphysically speaking, psilomelane is said to aid in understanding our emotional patterns and empowering us to re-engrave those grooves.

Next week we’ll explore another well-known black chalcedony relative: onyx. Have you made wire jewelry with onyx, in any color? Send your Onyx pictures to tips@wire-sculpture.com, and they could be featured!