Chrysocolla, also called gem silica is found in large deposits and is fairly common; yet gem-quality chrysocolla is very hard to come by. Why? Because unlike the hardy agates and quartzes boasting a 7 on Mohs’ scale, chrysocolla only ranks around 2-3 (4 is optimistic) making it just as soft as copper metal. (In fact, chrysocolla’s soft blue color comes from copper, just like turquoise and malachite, which are stones that are often found in the same location as chrysocolla). This low score on Mohs’ Scale makes pure chrysocolla practically too soft to make into cabochons! This makes it one of the softest silicas among its relatives quartz, chalcedony, agate, and jasper.

However, nature intervenes: the hardiest chrysocolla can be found as "agatized" chrysocolla, or chrysocolla quartz, which will have a pattern to it such as swirls or bands as you would expect from an agate. The added quartz or agate gives the chrysocolla enough hardness to be shaped and polished into cabochons. Unlike its quartz relatives, chrysocolla isn’t really used outside the jewelry world, merely a decorative semi-precious stone. 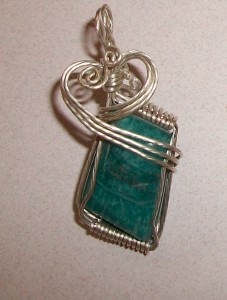 Gina Smith's youg friend cabbed this chrysocolla stone (her first cabochon!) and Gina wrapped it in sterling silver wire to show her friend how beautiful her cabochons could become!

The name for chrysocolla is Greek for "gold glue," which is because chrysocolla looks similar to the material the Greeks used to solder glue. Purest chrysocolla is a light blue, blue-green, or light green, although it can have brown or black features, and inclusions of malachite, sagenite, and other minerals. The first documented mention of chrysocolla was in 315 B.C. by a Greek man, Theophrastus, who was the successor to Aristotle’s school of philosophy and studied under Plato. In the ancient world, it was mined in Cyprus, Armenia, Macedonia, and Spain. Chrysocolla can have a glass-like appearance, and be botryoidal (bubbly or look like a bunch of grapes) or be found in a druzy composition: with exposed raw crystals. It’s been suggested that chrysocolla is a mixture of spertiniite and chalcedony. 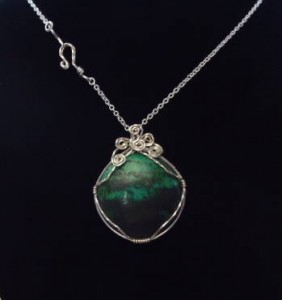 In Modern times, chrysocolla is extracted all over the world. Some chrysocolla sites include: Mexico and the Southwestern US, Chile, England, Poland, Russia, Italy, Israel, Zaire, the Democratic Republic of Congo, and Western Australia and Queensland, Australia. In fact, in Eilat, Israel, there used to be a large mine that produced a mixture of copper-influenced stones, including turquoise, malachite, azurite, and chrysocolla, collectively called "Eilat Stone." The Eilat Stone is the national stone of Israel, also called the King Solomon stone. 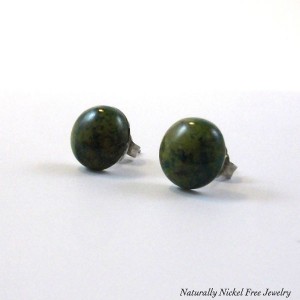 Donna Wallace created these chrysocolla earrings from chysocolla cabochons (from Wire-Sculpture!) and her Grade 1 Titanium Post earrings and clutches (safe for nickel-sensitive ears!)

Metaphysically speaking, chrysocolla is reputed to stimulate creativity, aid in communication, patience, and intuition; it is seen as a gentle and soothing stone.

Next week, I’ll cover a close stone, chrysoprase, and its relatives prase and plasma. Have you made wire jewelry with chrysprase before? Send your chrysoprase pictures to tips@wire-sculpture.com, and they could be featured!