Carnelian is the rusty, red-orange translucent form of chalcedony. Sard is practically a synonym for carnelian, since there aren’t hard and fast rules about calling a stone one or the other. However, sard pieces would generally be duller, darker (almost black) and harder than carnelian. Still, carnelian ranks a 7 on Mohs Scale and is a good stone for nearly every type of jewelry because of its durability. It is comparatively lightweight. Many members of the quartz/chalcedony family were used in ancient times, and carnelian is no exception: in Rome, it was used widely for stamping seals in wax, since wax does not stick to this stone. 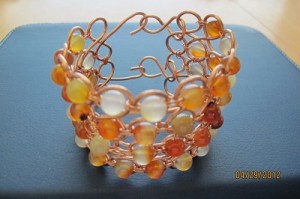 Those of us familiar with etymology might think that carnelian comes from the Latin caro, carnis for flesh (think carnivore) — and the stone being a similar color to raw meat. But the true derivation actually comes from cornum, Latin for a cornel cherry (Europe: European Cornel; North America: Cornelian Cherry), which has translucent red fruit resembling carnelian. So when you see this stone labeled cornelian, that is actually the original, correct spelling. But after hundreds of years of carnelian, most of us are just used to calling it by that name.

Sard likely comes from the Persian word sered, meaning yellow-ish red, although Pliny the Elder thought it might come from the city of Sardis. Carnelian is mostly found in India, Russia, South Africa, Madagascar, Australia, Brazil, and the US. 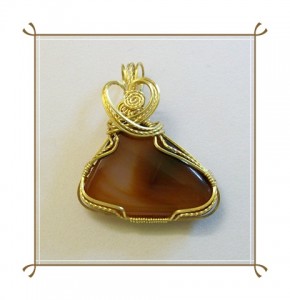 Carnelian can be sold naturally. However, most carnelian and carnelian-like agates are heat-treated to have a more vibrant orange-red color. Heating can activate the iron deposits in the stone and produce a richer color. Also, if you leave carnelian out in the sun, its color can change or become darker. True carnelian’s color is typically cloudy-looking, rather than solid or flat. The red color in carnelian comes from hematite, or iron oxide.

Janet wire wrapped this carnelian stone, as well as the chainmaille bracelet, for a special friend.

Carnelian can be confused with shell. Really? Yes — in cameos. Stone cameos that are carved from a carnelian background and a white agate or onyx foreground can look very similar to traditional shell cameos. To tell them apart, you can use one of 2 tests on the back of the cameo that won’t show. First, shell is very soft, only about 3-4 on Mohs’ Scale, and Carnelian is a 7. So a bit of steel (4), glass (4-5.5), or a knife blade (5.5) would scratch the shell, but not the carnelian. The second test you can do is to take a drop of hydrochloric acid and apply it to a discrete part of the cameo. A shell would bubble and fizz in that spot, while a carnelian stone wouldn’t react at all. 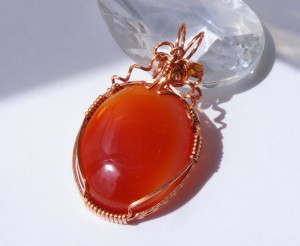 Jamie Frandsen wrapped this carnelian cabochon with copper wire into a pendant.

To care for carnelian, keep it safe from heat and chemicals; it’s safe to clean carnelian in warm, soapy water with a soft brush. 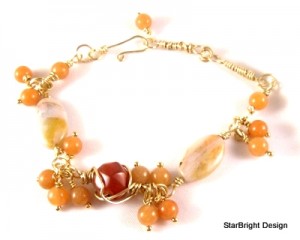 Metaphysically, some associate carnelian with Mars and the Zodiac signs of Aries, Taurus, Leo, Virgo, and Capricorn, and is an alternative birthstone to Ruby for July. Carnelian is associated with fertility, family, and passion.

Next week’s gem profile will be on another type of chalcedony, chrysocolla. Have you made wire jewelry with chrysocolla before? Send your chrysocolla pictures to tips@wire-sculpture.com, and they could be featured!