Chalcedony used to be considered a fibrous variety of quarts. However, it has been shown to contain quartz as well as moganite, a different form of silicon dioxide with a crystal structure unlike quartz (named for Mogan on the Canary Islands). However, you will still see various sources say that chalcedony is a form of quartz, and that agate is a form of chalcedony. They all are made up of silicon dioxide. 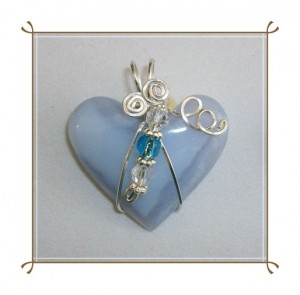 Being quartzlike, chalcedony (kal-SED-uh-nee) typically ranks a 7 on Mohs scale, and has been used in carvings since before Roman times: even Roman carved seal rings are still in good condition today. This stone is called chalcedony in the gemstone trade when it is gray, white, or blue translucent; the AGTA ranks it among the “Sky Blue” gems. However, chalcedony, can naturally appear in practically any other color as well: yellow, orange, red, pink, purple, green, black, and multicolored and banded. Forms that are colored, in the gem trade, typically have other names, such as Tigerseye, Aventurine, and Bloodstone.

Blue Chalcedony has become popular in recent years, often named for its place of origin, such as Mohave Blue Chalcedony (from California) and African Blue from Namibia. The blue in blue chalcedony can have pink (as mentioned) or gray hues within the stone, and even a slight adularescence (as moonstone does). Bluish chalcedony from Oregon is not “blue chalcedony,” rather it often has slight bands or clouds of pink, creating a lavender color, which is confusingly called Holly Blue. Holly Blue is often grouped with the blue chalcedonies, though, and is typically considered the most valuable of the group. Difference in color and transparency is due to metallic impurities, meaning that minerals and elements such as titanium, copper, nickel, and iron are present as the stone crystallizes.  For example, the form of chalcedony that’s Granny Smith apple-green, Chrysoprase, gets its verdant color from nickel. Chalcedony is typically cabbed, carved, or made into beads; particularly transparent pieces are sometimes fascinated. 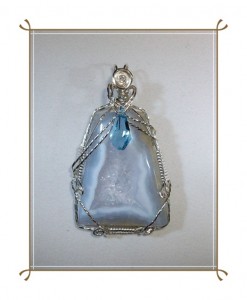 White, blue, and gray chalcedony is mainly found in the California and Nevada deserts, India, Siberia, and Iceland, but is found in many more smaller locations all over the world.

To clean natural chalcedony, the AGTA recommends to rinse with mild dish soap and let dry; it needs no special care. Chalcedony doesn’t typically react to heat, although sometimes it is dyed or stained. Glass is often used to imitate chalcedony, but you may be able to see tiny bubbles, swirl marks, or “too-perfect” inclusions that will tip you off to the true glass nature of the “stone.”

Next week’s gem profile will be on a well-known chalcedony, carnelian, and its relative, sard. Have you made wire jewelry with carnelian before? Send your carnelian pictures to tips@wire-sculpture.com, and they could be featured!