Thundereggs and Mexican Lace Agate, one in a Series on Quartz

You probably know the story some of us tell children who become scared during thunder-and-lightning-storms: “Oh, that’s just God and the angels bowling. Listen, did he just get a strike?”

According to legends told by the natives of the US Pacific Northwest, the Thunder Spirits lived at the peaks of Mount Hood and Mount Jefferson, and when the spirits on one mountain grew mad at the other mountain’s spirits, they would throw rocks at them!

Not just any rocks, of course: thundereggs.

The Thunder spirits, naughty beings, stole these eggs from the nests of Thunderbirds — mythical powerful birds you may have seen on totem poles.

Thundereggs, also called lithophysae (rock bubbles) look like ordinary rocks from the outside, usually about the size of a baseball or softball (although they can be taller than a person!), but when sliced into, they contain beautiful agate formations. 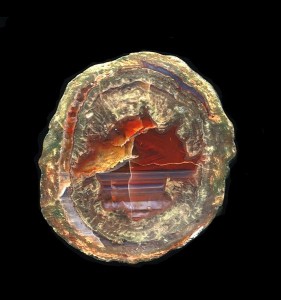 Thunderegg agate from the south of France, image property of David Rix Eibonvale

Now, while this is similar to a geode — ordinary on the outside, beautiful within — thundereggs can only be called geodes if there is a cavity or hollow spot inside the rock. Many thundereggs are completely full of solid agate. And while most thundereggs contain agate, some may instead contain jasper, opal, quartz, or selenite (pure, or combinations of those stones).

Like other agates, thundereggs form from rhyolitic lava flows, slowly cooling and solidifying inside a cavity. Scientists still don’t quite agree how these unique formations occur, but a common theory seems to be that molten or cooling rhyolite was launched out of volcanoes. Projectiles such as these are called volcano bombs. Then, the molten agate drops fell into volcanic ash and slowly formed thundereggs. So in a sense, the Pacific Northwest tribes may have been right that the volcano-dwellers threw the rocks! 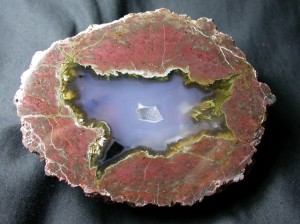 This Thunderegg is from the Black Rock Desert in Nevada; image property of David Rix Eibonvale

While Oregon (which includes Mt. Hood and Mt. Jefferson) is the most famous location for thundereggs — in fact, in 1965, it was chosen as the Oregon state rock – thundereggs can also be found across the US and Canada, as well as in pockets of Africa and Madagascar, Central Europe (Poland, Romania, Turkey, France), Australia, Mexico, and Argentina. It makes sense that thundereggs are found in historically volcanically active regions. 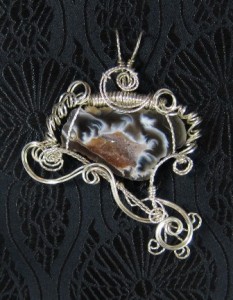 Mexican Crazy Lace agate typically comes from mines in northern Mexico and has been widely popular in lapidary and jewelry since the 1950s. Mexican crazy lace agate has also been called Rodeo Agate and Rosetta Lace Agate by various sellers and mine operators. 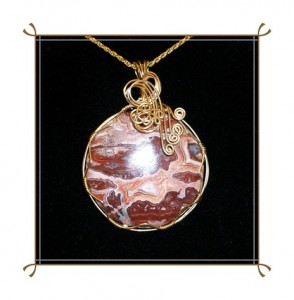 Rather than the calm lines of Botswana agate, Crazy Lace agate’s banding pattern is erratic and lively, and typically has a wide range of colors along the bands, including red, yellow, white, gray, and pink, almost reminiscent of an Indian paisley pattern. It can also be dyed with vivid purples and blues, and goes under the names Purple Crazy Lace Agate and Blue Crazy Lace Agate. Mexican crazy lace agate is found in Cretaceous-age limestone, dating it to 65-90 million years old! 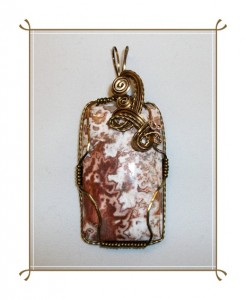 Laguna lace agate is a specific type of Mexican Crazy Lace agate. Other variations include Bubble lace, Cactus lace, Chinese writing lace, Dog tooth lace, Fine line lace, Victors lace, Zebra lace — you can probably imagine what many of those agates look like! Other variations are named for the town or area they were found in. “Laguna Lace Agate” describes a variety that looks like a cross between Mexican Crazy Lace agate and Laguna agate — hence the name. Laguna agate, also from northern Mexico, is a gorgeous variety of agate considered the most-sought-after banded agate. View a beautiful Laguna Agate collection here. 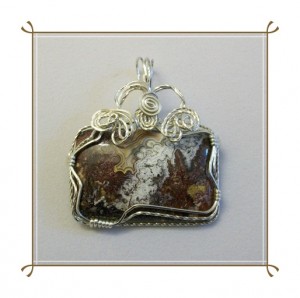 Laguna lace agate is found in Chihauhua, Mexico, near the original Laguna agate find. The desert agate deposits begin about 83 miles south of El Paso, Texas. Chihuahua, the largest of Mexico’s 31 states, had an “agate rush” for about 50 years until the late 1960s. While it doesn’t have the clear and valuable banding of Laguna Agate, it still has the fortification banding we discussed in the first agate profile: that is, when it is first sliced, the agate banding looks like a bird-eye view of a medieval castle fortress wall. Laguna lace agate is commonly found in blue, but also the rainbow: orange, white, cream, yellow, black gray, pink, red, and green. 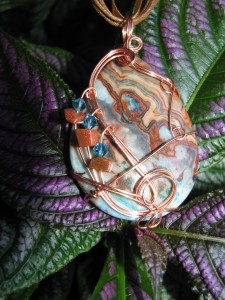 Next week’s gem profile will be a short article to conclude the agate family, covering Petoskey Stones and Indonesian Fossil Coral (agatized coral), before we move into the general chalcedony family. Have you made wire jewelry with Petoskey stones or Fossil or Agatized Coral? Send your agate pictures to tips@wire-sculpture.com, and they could be featured!