Agate, one in a Series on Quartz

Generally agate’s hardness is a 6.5-7 on Moh’s scale, with a waxy luster. Although some agates have the appearance of glass, it is much harder: glass is typically only as hard as a 5.5. Agate is quite abundant and most varieties are very inexpensive, yet some still use glass to imitate it. A simple scratch test will prove whether your gem is agate or glass. Many glass marbles are made to imitate agate, and there are also many beads on the market sold as imitation agate.

Agate typically appears in gray, blue, yellow, or brown shades, and sometimes red. Green and blue are the most rare of agate colors. Agate takes dye and color treatments well, which I will discuss along with geodes — bright and neon colors such as bright blue, bright purple or bright pink are indicative of dye.

Idar-Oberstein, or at the time Oberstein, Germany, was the biggest name in cutting and processing agates, dating back to 1497. This included cutting European imports of South American agate, and dyeing. Low-cost energy provided by the Nahe River ran the cutting and polishing machines, and labor was inexpensive. Oberstein prospered until local gemstone quarries dwindled; many laborers left for Brazil and other South American gem excavation sites, creating a new gem economy. While Oberstein has recovered in the years since WWII, it has steep competition from Thailand and India.

There are many forms of agate; this week is on riband agate, in which the layers of agate are parallel to each other.

Many of the agates we’re used to seeing, for example Blue Lace agate and Botswana agate, have distinctive banding: light lines running through the dark piece (at times the hues are reversed). Sometimes this banding is so tight that it causes a rainbow effect, which you can see in this picture. While a neat effect, it usually doesn’t have an effect on the agate’s value or price. 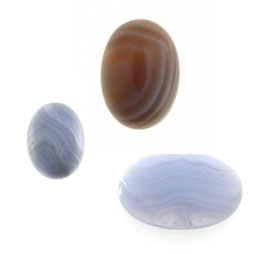 Banding is typically very small, and the bands are typically the same thickness, end to end. Some are so small they can only be seen under microscope. Banded agate is called “fortification agate” when the banding is an angular circle shape: that is, the banding forms closed shapes that are reminiscent of a birds-eye view of a bastion or fortress with surrounding walls. There also other types of banded agate that are named for the appearance of the banding formation: eye-agate, ruin-agate, star-agate, shell-agate, coral-agate, and cloud-agate (which has cloudy patches against the transparent stone). 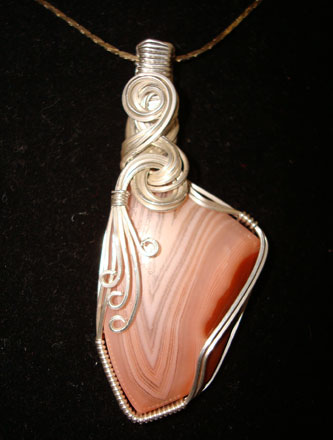 Brecciated agate (click to see an example) is a kind of agate which has chunks of rock, rather than banding. “Brecciated” simply means broken rock, so while brecciated jasper is rock formed form pieces of jasper, brecciated agate is formed from pieces of agate that are then formed into a new rock. One example would be caused by an earthquake. A piece of formed agate rock is broken in the earth by an earthquake. Then, over time, a quartz such as amethyst forms around the agate pieces. This results in brecciated agate, which appears to have “chunks” of agate embedded in the stone. This kind of agate is sometimes called “ruin agate,” because it resembles the ruins of buildings. The original agate and the surrounding material are often in contrasting colors,

Next article will cover agates that have “dots” rather than banding, such as bloodstone, fish-egg, polka dot, and orbicular agate. Have you made jewelry with any “dot” type agate? Send your agate pictures to tips@wire-sculpture.com, and they could be featured!