Cryptocrystalline Quartz Introduction, one in a Series on Quartz

As you have become aware in recent months, there are many, many kinds of quartz dug from the earth’s surface! However, it wasn’t until the 1800s that the many kinds were recognized as all having the same substance, SiO2, making them all quartz. This was discovered by the Swedish chemists Bergmann and J. J. Berzelius. 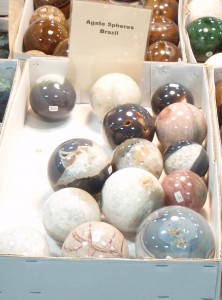 And yes – Jasper is often categorized under Chalcedony (kal-sedn-ee): Dale has discussed the jaspers in great detail in Gem Profiles starting here.

How are Macro- and Cryptocrystalline Quartz Different? 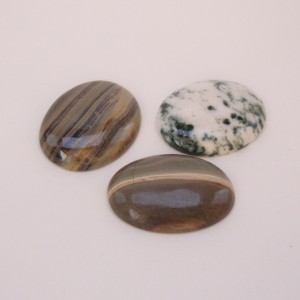 Because the cryptocrystalline quartzes can include several non-quartz minerals, many of these quartzes are considered “rocks,” rather than macrocrystalline amethyst, citrine, tigereye, and smoky quartz, which are more likely called “gems” or “stones” due to their purity.

Besides how they appear finished, the difference lies in how the quartz is formed. Generally speaking, in macrocrystalline quartzes like amethyst and phantom quartz, the quartz forms by adding molecules to the surface of the crystal, one layer at a time, jutting out into the surrounding environment. However, cryptocrystalline quartz emerges from a silica and water solution, usually formed precisely to its mold.

Other types of chalcedony, besides agate, include, Carnelian, Chrysoprase, Onyx, Thundereggs, Petrified Wood, and some include Aventurine. Chalcedony is found all over the world, including in each of the 50 states. Chalcedony has been used since the Bronze Age, and was especially common along the Mediterranean: in jewelry, beads, and even wax seals – because hot wax would not stick to it. The name of chalcedony comes from the town Chalkedon, which is in present-day Istanbul, and was formerly an ancient Greek village. Idar-Oberstein, a German town, became renowned in the 19th century as a major chalcedony and agate processing center, preparing and dying the stones for carving and jewelry making. Many chalcedonies, especially agate, take dye very well, and some are heat-treated, such as carnelian, to deepen the coloration. 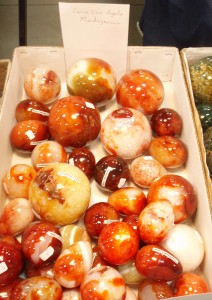 Agate is a variety of quartz (classified as chalcedony) that’s characterized by its fine banding and bright colors. Agates are typically about 90% quartz and 10% impurities and moganite, also SiO2 but in a different structure than quartz. Agates are associated with volcanic activity and can be found in metamorphic rocks. Agate’s been used in making jewelry and carvings for millennia, having been discovered along the Achates River in Sicily over 3,000 years ago. 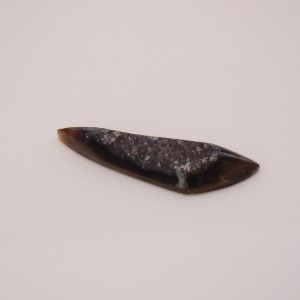 Agate often fills cracks or veins in volcanic rock, or cavities in cooled lava – it can even be found in dinosaur bones. Many agates do not fill completely, in which case druzy quartz crystals can form. In fact, sometimes amethyst crystals will form! There are dozens of varieties of agates, including fire agate, tree and moss agate, plume agate, and the agate geodes I mentioned. I’ll be discussing some of these next week – send your agate pictures to tips@wire-sculpture.com, and they could be featured!