Summarizing Macrocrystalline Quartz, one in a Series on Quartz

Within this brief conclusion of macrocrystalline quartz I need to mention a few varieties that I have not yet touched on, such as:

Strawberry Quartz
In the late 1950’s, some sensational vivid strawberry red quartz was discovered in Mexico. This water clear quartz had been naturally included with so many microscopic hematite plates that it looked red. Many of these imperfectly formed crystals were used by lapidaries to make into cabochons and heart shapes. A cache of beautiful, natural strawberry quartz has also been found in Kazakhstan (a country between Russia and China). Please realize that these two examples of true strawberry quartz are extremely rare! Most of what is called strawberry quartz on today’s market is found mainly in Brazil and Russia and is quartz that has inclusions of iron oxides like lepidocrosite, hematite or goethite. 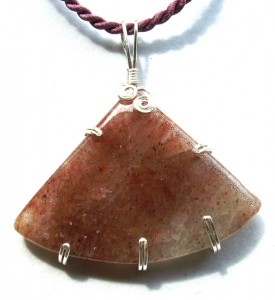 This translucent quartz cabochon could be referred to as "strawberry" quartz, due to its many red inclusions.

Buyer beware! Several years ago, I remember when the jewelry supply market was flooded with a beautiful pink "quartz" that carried the label "’strawberry." The first pieces I saw were rather small, pinkish cabochons that looked as though they had red streaks and spots or "seeds" included. Most of my rockhound friends and I were perplexed. Just where was this new strawberry quartz deposit and how large was it that so many things were being made from the material and sold for really low prices? The Internet was buzzing! We later saw a larger piece with visible air bubbles identifying it as just glass. But because quartz is silica and glass is made of silica, vendors thought they could label glass as quartz! Soon after came Cherry, Blueberry, Pineapple and Kiwi "quartz", that have been grouped together as Fruit Quartz. Very affordable, these different glasses do make up into pretty jewelry for summer and spring. 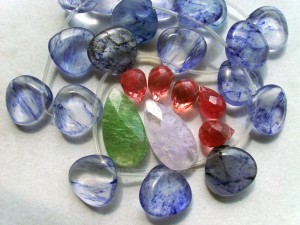 A variety of fruit quartz, including pineapple, kiwi and cherry surrounded by blueberry briolette beads.

Prase
There seems to be a lot of confusion about what is labeled as "prase" these days. A transparent naturally leek-green colored silica also known as emerald quartz, prase is extremely rare and can be mistaken for nephrite or jadeite. Modern vendors tend to call any green quartz prase, which has also become a nickname for chrysoprase; a cryptocrystalline quartz I will cover later. 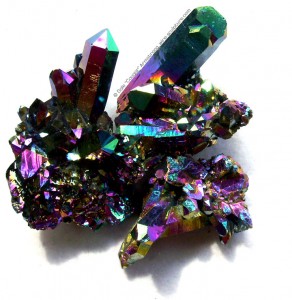 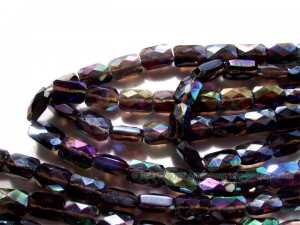 Stands of smoky quartz beads that have been vapor coated. I wonder if the original quartz was white?

Treatments
We already have learned that heat treating certain varieties of amethyst and smoky quartz will produce citrine, irradiated amethyst turns it green and that irradiating white quartz can make it smoky, but what about the metallic and  seemingly opalized colors? Fortunately due to its crystal structure macrocrystalline quartz doesn’t take a dye well, but there is one special treatment that can turn an otherwise dull quartz crystal into an unusual beauty: vapor deposition. Simplified: individual quartz crystals or clusters are placed into a special vacuum chamber where they are coated with a thin film from vaporized elements that have been mixed with oxygen. The multitude of different colors and slightly metallic aurora borealis effects can be due to the following combinations that I have listed, along with some of their marketing names: 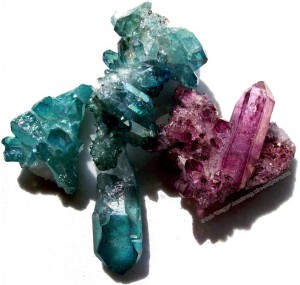 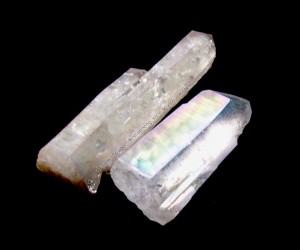 Of course although beautiful, each of these treated crystals or clusters is said to have special metaphysical powers. Although I am not personally opposed to the power of natural stones that have history and science to back them up (such as quartz watches and radios) I feel the need to warn you about spending large amounts of money while seeking a special "fix" to normal human challenges. If it sounds too good to be true…

Wow! The past several weeks of quartz Gem Profiles have been fun, but we are not done with quartz yet! Next week I will continue by opening the subject of cryptocrystalline or microcrystalline quartz.