Included Quartz Part 2, one in a Series on Quartz 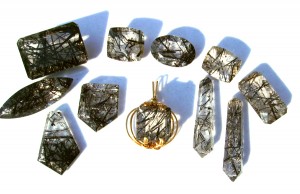 A collection of faceted tourmalated quartz, one set into a wire pendant by Dale Cougar Armstrong. 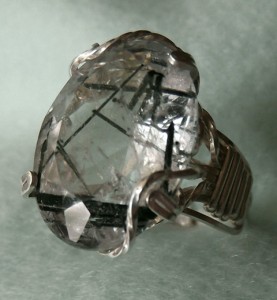 A very cool type of included quartz is called "Medusa" quartz, named for resembling the shape of the medusas rondeau jellyfish. Trapped blobs of gilalite (named for Gila County, Arizona) seem to float in the water clear quartz as seen in these Google images. 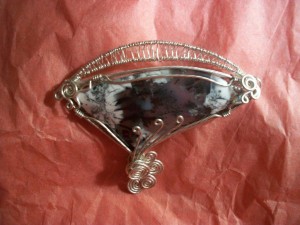 Have you seen clear quartz that looks as though a snowflake, branch or leaf has been suspended inside? This type of included quartz is known as dendritic quartz. No, the images within the quartz aren’t fossils, rather they are dendrite (meaning tree) crystal forms of either chlorite or iron oxides. Instead of trying to rewrite what has already been well written, for those of you who are interested in learning more about dendrites I suggest reading the following pdf download: How Do Dendrites Form? 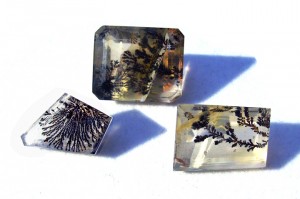 Probably my personal favorite type of included quartz for jewelry design is what can be called Garden, Undersea Reef, Scenic, Monet, Lodolite, Lodalite or Dream Stone quartz. Once again, I was fortunate to have purchased quite a bit of this material many years ago, before it really "had" a name and became such a popular jewelry making item!

I prefer to call my pieces "Monet" quartz, as the images resemble his impressionist paintings; one of which I wired into a pendant.

The latest label for this exotically included quartz, lodolite/lodalite, translates into "stone from mud" because the quartz crystals often formed in clay/mud pockets. While the silica/quartz was forming, an additional mineral became involved. These heavier materials of cookeite/chlorite settled to the bottom of the quartz formation in colors including white, beige, yellow, orange, green, light blue, light brown and light pink. Sometimes the chlorite minerals settled down and formed their known crystal shapes of rosettes, balls and radiating spheres, and sometimes the deposit became frozen during formation, appearing as clouds. (I do need to mention that occasionally the green can appear mossy, but included macrocrystalline quartz should not be confused with cryptocrystalline moss agate, that will be covered in my future cryptocrystalline articles in this quartz series.) Other materials within lodolite quartz include iron and calcite. Note though, when this quartz contains mainly bright orange iron oxides mixed with cream and white calcite, it can be labeled "Leolite." Whatever you decide to call it, in my opinion, chlorite included quartz is fabulous! 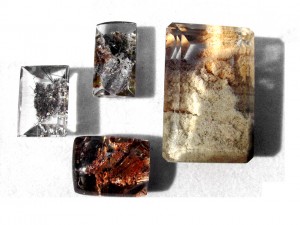 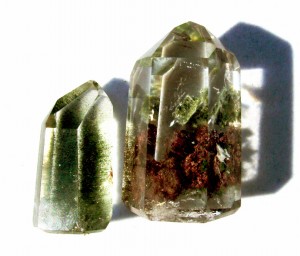 Natural quartz crystals from Brazil, with chlorite inclusions and clouds.

Okay, now what do you suppose happens when a quartz crystal stopped growing and another mineral crystallized on top of it, coating the original crystal with thousands of tiny colored crystals; and then additional silica entered the same vug/cavity and another quartz crystal form grew over the entire combination? Appearing as one or more ghost-like crystals within a single specimen, these are called phantoms. Otherworldly and rare, phantom crystals can be composed of a wide variety of materials including: sand, clay, chlorite, actinolite and mica or iron materials such as goethite and hematite. One other way that a phantom may have occurred could be due to temperature changes during the crystal’s formation, where severe temperature changes interfered with the original growth for a bit (like a few thousand or millions of years) and when it restabilized the crystal continued to grow in its normal manner. Phantoms are most often found in rock crystal, occasionally in amethyst or smoky quartz. Although some lapidaries will cut and polish huge phantom specimens into items like crystal balls, eggs and spheres, most examples are smaller and will make fine pendants using a wire technique such as the Caged Crystal, which will not harm the specimen in any way. 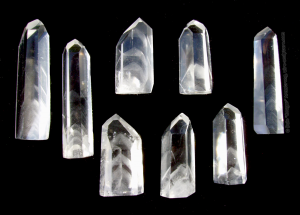 A few of the water quartz crystals in my personal collection, showing a variety of phantoms. 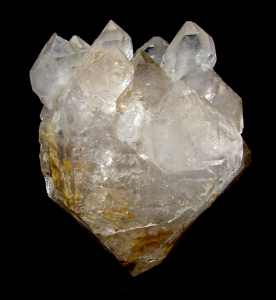 Believe it or not, almost all quartz crystals have liquid or “enhydro” inclusions. The most common is water, which appears as microscopic bubbles causing clouds or a milky look. Of course I would love to have a specimen in my collection, showing a large liquid inclusion as a bubble with fluid that moved when the rock was turned, however…it is on my wish list. 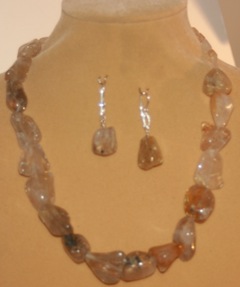