<br/ >
Included Quartz Part 1, one in a Series on Quartz

We have already learned that the microscopic inclusion of certain minerals is actually responsible for the color of a macrocrystalline quartz, such as: iron/amethyst, iron oxide/citrine and both iron forms in ametrine; aluminum, calcium, lithium or magnesium/smoky quartz; iron, manganese, or titanium/rose quartz; chromium mica/aventurine, and crocidolite with iron/tiger eye, tiger iron, and Pietersite; but what about “visible” inclusions?

“Garden Quartz”, rutilated quartz, “Super Seven”, it doesn’t matter what the marketing name is, wire jewelry designers LOVE using included quartz! Within this eighth article in my series on quartz, you will discover some of the more popular minerals that can be naturally included in macrocrystalline quartz. I will warn you ahead of time though, the list of minerals that can be trapped in quartz is extensive, therefore I will only write about those most often found in the cabochons and stones more readily available. 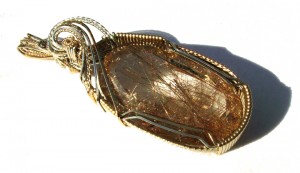 This 402ct example of a faceted rutilated quartz stone was made into a pendant by Dale “Cougar” Armstrong.

Basically there are three ways that a host of more than 45 mineral crystals could have become included in translucent to semi-translucent quartz. One example is when mineral crystals formed first, and then the silica/quartz filled in and solidified around the original material. Another situation would be when two or more minerals form in the same space and at the same time as the silica/quartz; or if the geological conditions were right while the quartz/silica was forming, another mineral entered the same area and took over part of the crystal structure. 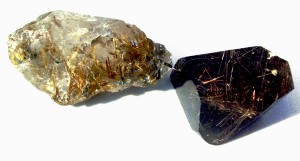 Examples of windowed smoky and rough water clear, rutilated quartz. Notice the rutile crystal structure at the base of the clear quartz, meaning that these crystals probably formed before the quartz enveloped them.

Rockhounds and lapidaries often use the term “sagenite” or sagenitic quartz, to describe all types of included macrocrystalline quartz, especially those specimens that include rutile crystals. Probably the most well known and easiest to identify, rutilated quartz is when clear through semi-clear quartz contains slender needles of embedded titanium dioxide crystals. The rutile needles can appear to be in the shape of an open fan or radiating mass, known as acicular, or they can look like individual floating pieces of hair frozen forever in space. Those of us familiar with paints know that pure titanium dioxide is an important pigment used to produce a brilliant white, however due to trace amounts of other minerals, rutile crystals can be silver, red, reddish-brown, gold or yellow. When rutiles in a crystal appear to be more heavily concentrated at the bottom of the crystal than at its point, more than likely the titanium dioxide crystals formed first and then the quartz filled in around them, perfectly preserving the structure of the rutiles. Faceted stones or cabochons that visibly show rutile crystals in a star-like formation are rare and most desirable. Some of the other names for rutilated quartz include Venus Hair Stone and either Hair or Needle stone. Most of the rutilated quartz today is mined in either Brazil or South Africa. 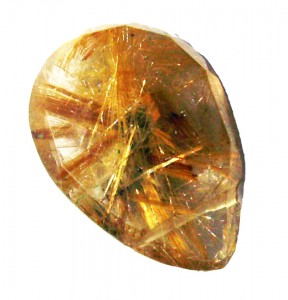 Although not a perfect example, this faceted rutilated quartz shows a “star” formation. 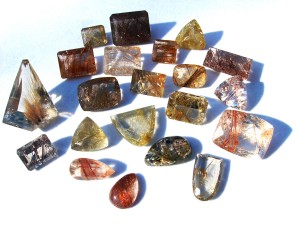 Like most jewelry designers, I have a personal collection of beautiful, rutilated quartz stones in many colors. 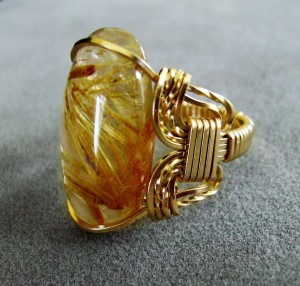 Other inclusions that may resemble titanium dioxide rutiles include epidote and actinolite. Although epidote is found in colors ranging from shades of almost black through brown and gray, it is best known for having long, thin crystal blades of bright through dark green. Similar to rutiles, epidote crystals may also form in fan shapes, or individually; thus the marketing label of “Grass Quartz” describes epidote crystal included quartz. Or does it?

Known as Thetis Hair or Byssolite, the mineral actinolite (meaning beam or ray) also forms in the same ways. Another type of asbestos, fibrous actinolite crystals can be found in the colors of white, gray, and black and also in shades of green that can be included in quartz! Perhaps vendors are labeling any embedded long, blade or needle like crystal in grassy colors as “grass quartz”?

A “Grass Quartz” cabochon. Are the included crystals epidote?

There are even more minerals that can be included in what you may think is “just” rutilated quartz! Along with gold, silver, mercury and pyrite, these include, but are not limited to:

While I was going through my stock of included quartz looking for specimens to photograph, I came across a very pretty stone that I had not had the chance to identify yet. Research for this article leads me to believe that the red platy inclusions are either hematite, or lepidocrosite (see photo below). 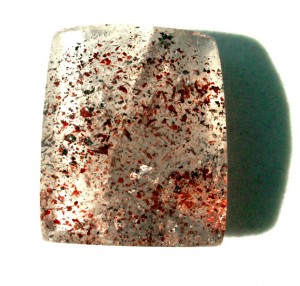 While reading about this form of iron oxide, I remembered another beautiful stone that contains lepidocrosite, along with 6 other materials that is marketed as: “Super Seven”, “Super 7″ or “Sacred Seven”. Now, I have to share my personal story about this particular material. In the mid 1990s, my stone man returned from his annual buying trip to South America with a very few, affordable faceted stones that appeared to be a tri-color quartz (amethyst, clear and smoky) with hematite and rutile inclusions. He and I decided to call it “rutilated amethyst”. 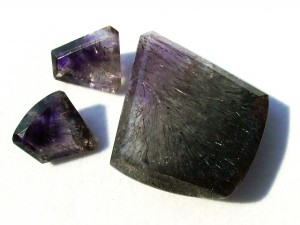 Three years ago (2009) while shopping at the Tucson gem shows, I came across the same stone being marketed with a very high price tag as “Super Seven”! Evidently the number “seven” includes all of the materials that can make up the stone: lepidocrosite, clear quartz, smoky quartz, amethyst, cocoxenite, goethite and hematite. However not all of these are present in each stone but metaphysically it is believed that each stone contains all of the properties of each “possible” inclusion because the stone was formed at least “near” all of the possible components. Thanks to the Internet, I was able to discover that the well-known author of a series of metaphysical mineral books, Melody, is responsible for trade marking the name “SUPER SEVEN“, under the classification of “stones”; also nicknamed “Melody’s Stone”. Amazing. 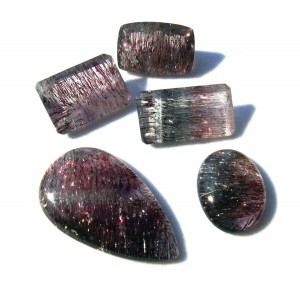 Tune in next week, when I will continue talking about the many different inclusions that can be found in jewelry making quartz; including: tourmaline, chlorite, phantoms and more! Have you made wire jewelry with included quartz before, such as tourmalinated quartz? Email pictures to tips@wire-sculpture.com, and they could be featured!