<br/ >
Aventurine, one in a Series on Quartz

The often sparkly light through dark green quartz that has been used to create ornamental objects for thousands of years, is what we call green aventurine. Similar to quartzite, but not really a chalcedony, aventurine is a granular quartz rock that is usually available in shades of green; but did you know that it is also found naturally in shades of brownish-red, tangerine-red through peachy orange, cream, white, gray and even blue? Unfortunately I can’t find my stock of aventurine to share with you, however I did find this excellent photo of rough aventurine. 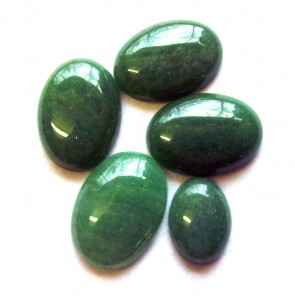 A selection of aventurine cabochons; notice the color variation.

Green aventurine owes its color to inclusions of green mica (fuchsite), colored by the presence of chromium. Hematite or goethite colored mica, and/or scales of iron oxide is responsible for the reddish and orange tones aventurine can have, while hues of blue come from the mineral dumortierite. The metallic iridescence that is associated with aventurine of any color is due to the platelets or flakes of the included mica and/or minerals. This effect has been named “aventurescence”. Shades of coral, orange, yellow and peach feldspars in the past, were also called aventurine as in ‘feldspar aventurine’, however these are now better classified as sunstone. 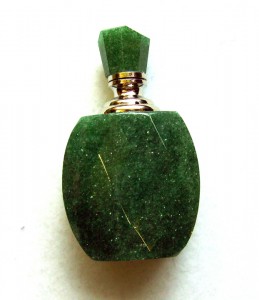 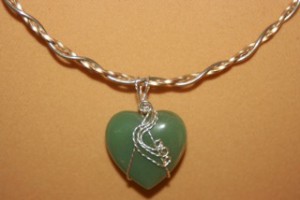 The origin of the name aventurine is very interesting. In the early 1700s, a glass-making family in Italy may have made a mistake one day and dropped some metallic crystals into a batch of glass, which resulted in a beautiful product that looked like stars from the heavens had been trapped inside the glass. They named the glass “a ventura”, which means “by chance.” That special glass is what we now know as goldstone! Because our subject rock resembled this glass, it was named aventurine. 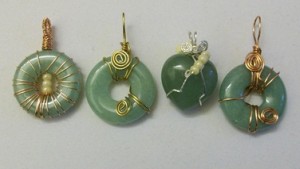 As a member of the macrocrystalline quartz family, aventurine has a hardness of 7 and can be semi-translucent to opaque; therefore this material is rarely faceted into gemstones. For centuries, lapidary use of aventurine for jewelry making has been in the form of cabochons and beads. A good example here would be India, who has always had an abundant source of green aventurine. In the past, it was popularly used in the creation of “beggar beads”, as well as for all forms of ornamental statuary, monuments and cut columns and blocks for building. (Beggar beads could also be referred to as “prayer” beads due to the fact that the honorable profession of begging described one who was paid to pray for different people and/or causes.) 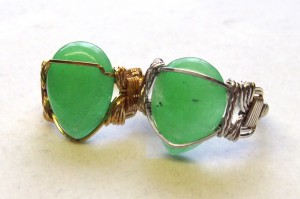 This pair of classic cabochon-style rings shows how bright aventurine can be, explaining how it could be mistaken for chrysoprase.

Besides India, green aventurine is also mined in Brazil, Austria, Russia, Tanzania, Africa, China and North America. While Spain, Chile, Australia and Russia has red aventurine as do Brazil and South Africa. Aventurine can be confused with jade, therefore the amazing quality of green aventurine from China is highly valued and has been called “Indian Jade.” Other normal look-a-likes include amazonite and feldspar; and rare occurrences of transparent, bright green aventurine has been mislabeled as emerald or chrysoprase. 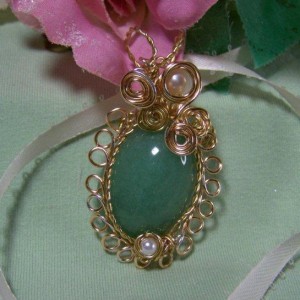 Judy Copeland created this aventurine pendant by wire wrapping an aventurine cabochon and embellishing with pearls. 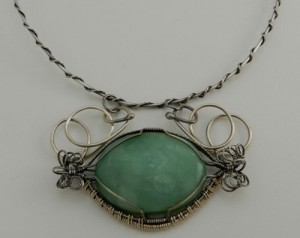 Aventurine can be used as an alternate anniversary stone for the 8th wedding celebration (the traditional stone being green tourmaline) as well as an alternate birthstone for those born in the month of August (peridot being the traditional choice). Metaphysical uses for typical green aventurine include: helping to balance one’s male and female energies; developing ones pioneering spirit and to enhance one’s creativity. 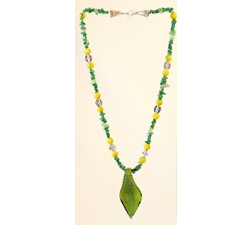 Deborah Collyar created this necklace with a lampwork glass pendant and beads; the green beads are amazonite and aventurine.

Did you know that tiger-eye is classified as a macrocrystalline quartz? Learn about it next week. Have you made wire jewelry with tiger-eye or tigerseye before? Email pictures to tips@wire-sculpture.com, and they could be featured!