Amethyst, one in a Series on Quartz

As we learned in an Introduction to Quartz, macrocrystalline quartz results when the mineral’s crystals are easily visible. When this type of precious quartz is translucent to transparent, it can be made into cabochons or carved; however, when it is “jewelry grade” or totally transparent with zero inclusions, it is usually faceted into some of the most amazing gemstones! The color of a quartz is the result of it forming near, or with, another mineral or compound. The type of material that will be covered in this article is amethyst — to be followed by ametrine and citrine next week. I’ll cover prasiolite (green quartz),  rock crystal, rose quartz, and smoky quartz in weeks to come. 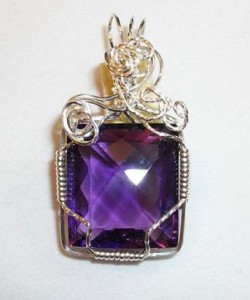 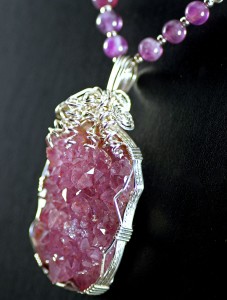 Arnie Adams used sterling silver wire to frame a cluster of amethyst crystals using techniques she learned from Dale’s videos; wire wrapping this piece was “wonderful and fun challenge,” she said. Arnie bought the crystals in a small shop on the north shore of Lake Superior this summer while on vacation.

The color coming from iron and from being exposed to natural gamma rays during its formation, quartz found in hues of deep blue-purple through light pinkish-lavender, sometimes with reds and gray, is better known as amethyst. Most of the amethyst on today’s market comes to us from South America and Madagascar; however, it can be found all over the world and is also mined in India, the Ural Mountains of Russia, Germany, Canada, Pakistan, Finland, and Sri Lanka. Special forms of amethyst include the “cactus” amethyst, that is found only in South Africa.

The Four Peaks Amethyst Mine (pdf download) in Arizona is almost impossible to access; however, several years ago I had the pleasure of personally meeting and digging with the then-miner of Four Peaks Amethyst. This deep, rich purple material is similar to that only before found in Siberia and is difficult to find on the open market; all the rough material being cut in Thailand and the faceted stones are mainly sold to major jewelry manufacturers. 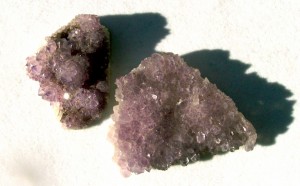 The amethyst from Thunder Bay, Canada is often a bit more pink due to hematite.

Amethyst from the Thunder Bay area of Ontario, Canada often has extra “spots” of hematite, causing a reddish-pink tint to the lavender crystals. By the way, this is a fun place to visit, because the gravel in some local parking lots is actually small chunks of clustered amethyst crystals!

The amethyst cathedral that resides in Dale’s studio.

The amethyst geodes, called amethyst cathedrals, that most of us adore are formed by the quartz crystallizing in pockets left by gasses in volcanic rock. Most of these come from Minas Gerais in Brazil, as small to gigantic geodes that formed in basalt. The blackish-gray material that surrounds these geodes is a stabilizing compound that is used to strengthen the thinner quartz walls. The beautiful, but pricy, flower-like slices of amethyst that can be found on the jewelry maker’s market today are slices of stalactite that often have a quartz or agate center. These amethyst slices come to us from Brazil and Uruguay. 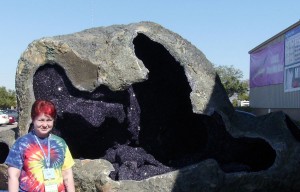 This huge Brazilian amethyst geode was the star of the show in Tucson a few years ago.

A slice of amethyst stalactite resembles a flower and works well with the agate butterfly in this pendant designed and made of wire by Dale Cougar Armstrong.

It wasn’t too long ago that gem quality amethyst was one of the “top” gemstones, along with ruby, sapphire, emerald and diamond. The best specimens used to come from Siberia and it was rare to find in large quantities and good color. However, when large deposits were discovered in South America, amethyst lost its “top” gemstone ranking. Now, because it is no longer difficult to find, amethyst is extremely affordable and available in a wide range of quality. 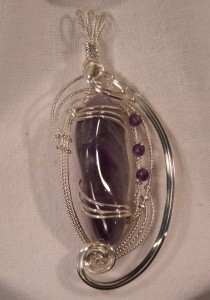 Elaine Pataky created this amethyst pendant by wrapping an amethyst stone in sterling silver wire and accenting with beads. 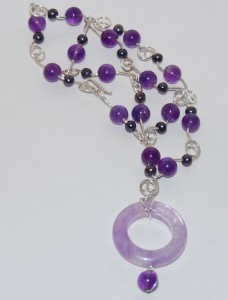 Amethyst’s range of colors encourages different marketing names and labels. For example, the pale amethyst that is more of a violet pink color has been called “Rose la France” since the 1930s. Translucent to opaque amethyst “quartz” that has banded stripes of white, purple, and lavender, can be labeled chevron amethyst and is mainly used to make into beads and cabochons. Amethyst can be confused with beryl, kunzite, fluorite, spinel, and tourmaline. Just beware of any deep purple faceted stone named “Japanese” amethyst, as this is synthetic or glass. Natural amethyst is extremely affordable and a great choice for wire workers! Amethyst will fade in sunlight, so be sure to keep your specimens and stones away from brightly lit windows! 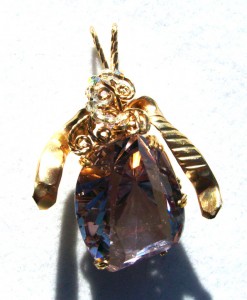 For centuries, amethyst has been one of the most popular quartz gemstones; the name coming from the Greek “a-methystos,” meaning “unaffected by drink.” Many people are familiar with tales of ancient Romans and Greeks supposedly drinking wine from cups carved from amethyst as a way to prevent intoxication. However, my research discovered the actual reason. After folks had drunk enough regular wine to become slightly light-headed, watered-down wine was poured into amethyst cups whose color made the wine appear to be of the best quality, thus preventing (or trying to prevent) heavy intoxication. Pretty clever! 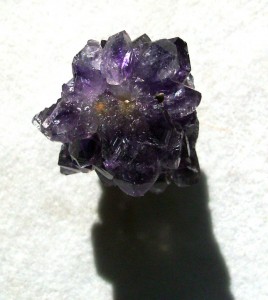 This is a 4 inch long amethyst stalactite, photographed from the top. Private collection, Dale Armstrong.

Amethyst is the state stone of North Carolina and the national stone of Uruguay. It is one of the stones mentioned in the Bible as being required in Aaron’s Breastplate, as well as being one of the foundation stones of the New Jerusalem. It is the birthstone for those born in February and the anniversary stone for the 4th and 6th years of marriage. Catherine the Great was a famous collector of amethyst, and the amethyst worn by Edward the Confessor in 1042 England is the oldest of the crown jewels. This lovely purple gemstone has been the chosen stone of kings and popes — as such many of the Catholic faith wear amethyst rings as a symbol of understanding, thought and philosophy. Ancient people also wore amulets carved from amethyst to prevent sickness and bad luck. 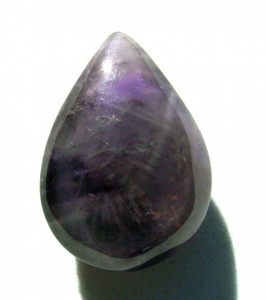 A cloudy piece of amethyst that has been carved and polished into a 3-dimensional teardrop shape; purchased in Thailand by Dale Armstrong for her private collection.

Metaphysically, amethyst is said to be a “stone of spirituality and contentment”, clearing the aura and balancing the energies of emotion, intellect and physical body. It is also supposed to protect against psychic attacks and to assist one with the assimilation of new ideas. (As designers, maybe all of us should carry an amethyst stone in our pocket this next  year?)

A chunk of amethyst rough that Dale dug in Wickenburg, Arizona. Notice how the crystals formed almost like a zipper. Further into the specimen, a cavity opened up that was lined with perfect crystals that were still wet!

Although I will be covering the subject of green quartz in the near future, I do have to mention “green” amethyst in this article. A couple of years ago, “green” amethyst hit the gemstone market big time! Affordable, beautifully faceted stones seemed to be everywhere, and a lot of us wondered just “what” this stone was. Why was a stone that has been known as being shades of purple suddenly being called “green”? (Kind of like an “orange” emerald.) Well, it turns out that whereas natural, gem-quality green quartz is pretty rare — you have probably guessed it — this “affordable” green amethyst is actually lab-enhanced, or heat-treated amethyst! Not just any amethyst will turn green when heat treated. The amethyst must come from certain areas of the world, and be very pale in color. Of course, this meant that man could now make synthetic green amethyst too! So, most of the “green” amethyst on the market today is synthetically produced. When the majority of amethyst is heated, it turns into shades of yellow, gold and brown, transforming into… one of the subjects for next week’s profile, when I will write about citrine and ametrine.

Have you made wire jewelry with ametrine or citrine before? Email pictures to tips@wire-sculpture.com, and they could be featured!