Millions of years ago, many meteors, or huge rocks from space, slammed into the earth, forming impact craters. Traveling at extreme velocities, these meteors were incredibly hot when they entered the Earth’s atmosphere and became meteorites. As we have learned, 90% of the Earth’s crust is made of silicate minerals, or forms of quartz that are mixed with other minerals, and depending on the location of the impact, the ferocious heat from a meteorite would melt that part of the Earth’s surface. When the meteorite actually hit a puddle of melted Earth minerals, sometimes its own content combined with them forming a new substance that “splashed” through the air and then hardened either in the air or after it landed on the Earth; sometimes hundreds of miles away from the original impact in areas that have been named strewnfields. Due to the Earth’s abundant silica content, most of these new materials formed a type of glass called a tektite. Tektite comes from the Greek word tektos, meaning “melted.”

The olive to grayish or brownish green tektite that we know as moldavite is an amazing material. Found mainly in the strewnfield that covers parts of the Czech Republic, Austria, and Germany, moldavite is believed to be a result of the Ries impact crater in Germany. The name moldavite comes from either the Moldau (Vltava) River or the town of Moldauthein, where it was first geologically documented. Although there are three other acknowledged strewnfields on our Earth, such as the one created by the Chesapeake Bay impact crater that threw greenish-yellow tektites as far away as the state of Georgia, the transparent green moldavite is only found in one area. While most follow the scientific consensus, there are those who do not agree with modern science and still believe that moldavite “fell to earth” as a gemstone from the heavens, similar to ancient people who called moldavite and every transparent green stone “emerald.” 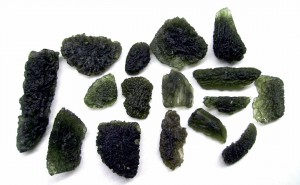 Moldavite has been determined to be more than 14.7 million years old. Mid- through late-stone age Paleolithic man valued moldavite, as proven by archaeologists who found fragments and amulets of moldavite near a statue in Austria that has been named “Venus of Willendorf” dating from between 24,000 and 22,000 BCE. European jewelers have been making jewelry using moldavite for many generations, often combined with rich Bohemian garnets; however, modern jewelers didn’t begin using moldavite until the end of the 19th century. Because a lot of the air-hardened glass shattered when it returned to Earth, moldavite is generally found in smaller pieces that weigh 6 to 7 grams each, but they can vary in size up to well over 20 grams. The largest specimen ever found is on display in the National Museum in Prague, weighing in at 238 grams, or a little more than half a pound!

Colored by iron and high in silica, moldavite is prized for its odd-shaped, sculptured appearance. The resemblance to green growing things with sharp to rounded spines and tines is most appealing to jewelry artists, and has been called either “splash” or “splatter” moldavite, having been formed by the speed it flew through the air and the fact that some of the glass was still soft when it hit the earth. Attractive, but irregular shapes like teardrops, tubes, barbells, individual branches, and ornamental kale leaves are common. Unlike man-made glass, moldavite usually has elongated inclusions of gas and air bubbles, and it will never contain crystals like volcanic glass will. The best moldavite is said to be translucent; however, if a piece is thick, it will appear to be more opaque without a bright backlight, and transparent pieces are often faceted. With a Mohs hardness of 6.5 – 7, cabochons, New Age items, and small carvings are also made of moldavite. Click to check out this very lovely carving of a Moldavite Cameo I found on a website for a Prague radio station! 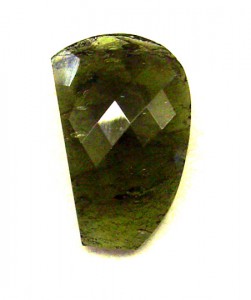 A freeform piece of moldavite that has a natural, rough back and a checkerboard cut top. Private collection, Dale Armstrong.

My research found another interesting subject related to moldavite. Did you know that many scholars who have sought an answer to the mystery of the Holy Grail think that maybe it was carved from moldavite? One legend tells of Napoleon, while seeking the truth to Christianity, of being presented with a green glass cup that he discarded. Another story tells of an ornate golden chalice, embellished with moldavite that was lost during World War II, like so many other treasures. Metaphysical uses of moldavite range from placing it under one’s pillow to encourage dreaming to carrying a piece in your pocket for a positive life change. It is known and used as “an awakener and accelerator of our spiritual evolution.”

Yes, natural moldavite is incredibly unique in its shapes and color, but because it is so rare, beware! There are many counterfeit materials being marketed as genuine moldavite. First, there is no such thing as “African” moldavite. The green glass that is said to come from locations such as Tanzania is as clear and bright green as an old soda or beer bottle, and there are no gas or air bubbles in most of it. Those pieces that do have round bubbles are not moldavite. Some people are actually melting glass and then pouring it into molds made from real moldavite, but remember, like snowflakes no two pieces of moldavite look alike and the “molded” glass will not have the sharp tines! Still another ruse is to melt old glass and pour it onto the earth, and then grind or tumble the dirt away to be able to sell the glass as “facet grade” moldavite. Material sold as “blue” moldavite is probably labradorite. 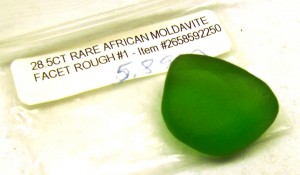 A piece of glass that was labeled and sold as facet-grade "African" moldavite. Private collection, Dale Armstrong.

Moldavite has always been a very special stone and it is now almost extinct! There were several mines in the Reis impact crater strewnfield area, but about all of them have now played out. Last year (2010) I spoke with my personal moldavite dealer from the Czech Republic who said then that they were currently digging more than 10 meters down and there was very little moldavite to be found. When I purchased my first specimens around 1995, I paid $2.00/gram. Last year it had gone up to $12/gram and that wasn’t for the “designer” pieces I was seeking! So, I guess I will have to be content with the collection I have, and I hesitate to make jewelry from any of them, without a prepaid custom order!

Staying with the glass varieties of gem-rocks, next week’s subject will be volcanic glass, or obsidian. Have you made wire jewelry with obsidian before? Email pictures to tips@wire-sculpture.com, and they could be featured!