As promised in my Gem Profile about opalized fossils, this week we’ll learn a bit about one of my favorite gemstones, Ammolite! Before I get into exactly what ammolite is, I first have to give you a brief background on the ammonite. 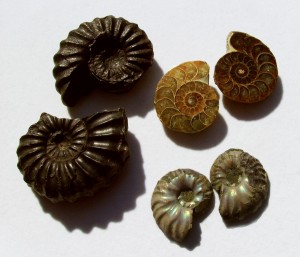 A selection of fossilized ammonites. Notice the mother-of-pearl shell on the bottom-right. Private collection, Dale Armstrong.

A member of the mollusk family, the term ammonite covers a wide variety of invertebrate marine animals, which are now extinct. Although they resemble the present-day nautilus, these animals were more like modern squid, cuttlefish, and the octopus, but their shell was on the outside. The word ammonite means “Ammon’s Stones,” and was given to fossil shells whose wrinkled whorls look like the ram’s horns that often appeared on the Egyptian god, Ammon. Most ammonites were small- to medium-sized animals, but some reached enormous sizes of up to 5 1/2 feet across!

The shell of an ammonite is divided up into chambers, and many varieties are found with defined joints in their shell that are called sutures. These amazing, free-swimming creatures abundantly populated all of the earth’s oceans and seas for several million years, before becoming extinct at the end of the Cretaceous period; therefore ammonites are not considered rare, except for one type that is only found in one location on earth. 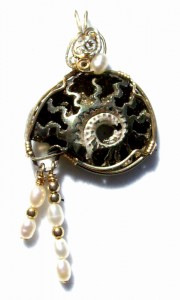 In the Bear Paw geological formation of the Canadian Rockies of Alberta, Canada, there is a fabulous ammonite that resembles opal! This special material is called Ammolite, which has been said to be the most rare gemstone on our planet. Ammolite really isn’t a type of opal or even a fossil; rather it is a natural, reconstituted mineral or a mineralized shell. This classification comes from the fact that the shell of an ammonite has not petrified or fossilized, but it has been transformed. 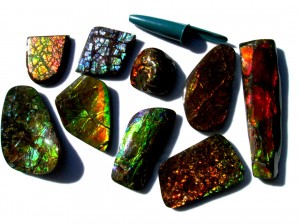 Freeform ammolite cabochons, waiting to be wire wrapped. Entranced, I spent almost my entire budget on ammolite one year! (The pen cap is for size comparison.) Private collection, Dale Armstrong. 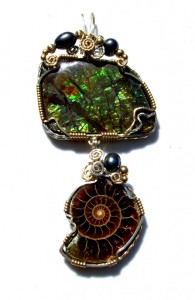 By combining an ammonite with an ammolite, Dale Cougar Armstrong created this pendant titled: “Ancient History” in 14k gold filled and Argentium wire.

Relatively new to the gemstone world, ammolite was recognized by the Colored Stones Commission in 1981 as one of only three organic gemstones; the other two being amber and pearl. The calcium carbonate that composed an ammonites shell, is the same material that forms the nacre of a pearl. During geological processes, this material transformed into a type of aragonite, resembling a mica-like substance, with many, many layers on the matrix, which is usually a dark brown or gray to black jasper-like or slate material. As such, ammolite is very soft, registering only about a 3.5 to 4 on Mohs scale, and to be used as a lapidary material it needs to be stabilized. One type of stabilization is to force epoxy into the many layers, fusing them together. Another way is to make the featured specimen into either a doublet or a triplet, and sometimes a whole ammolite fossil is simple protected by a simple layer of acrylic coating to protect the specimen for display purposes. All ammolite on the market for jewelry-making has been stabilized. 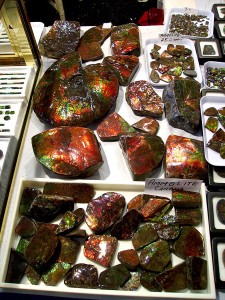 A wonderful display of ammolite cabochons and specimens for sale at the Tucson gem shows in 2009.

The iridescent colors of ammolite are truly spectacular! Vivid shades of red, orange, violet, gold, green and blue completely cover huge masses of the shell. Unlike opal, the play of color that ammolite displays does not shift, rather the diversity of color depends on how many layers thick the aragonite is. The most common colors are shades of red and gold, while the more rare are blues and greens. Due to the way the aragonite formed, many pieces of ammolite resemble what one might think of when imagining the skin of a mythological dragon, making it a very artistic stone to be used in jewelry designs.

Although ammolite can occasionally be found in the states of Montana and Wyoming, the best gem-quality only comes from Alberta, on land that belongs to the Blackfoot Native Americans. Those who mine this intense stone, need to have special licenses and permission from the Blackfoot, making ammolite their main source of income. This goes along with the history of ammolite and the Blackfoot. Their legends tell the tale of a special woman who found an ammolite in the middle of a harsh winter, when the tribe was all but starving. A spirit told her to bring it back to bringing it her camp, where people were in awe of the stone and held a buffalo ceremony. The next day a huge herd of buffalo arrived, saving the tribe, which led to the Blackfoot calling this stone “Inskim” or “buffalo stone.” 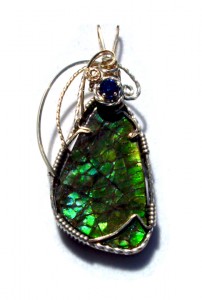 A freeform green ammolite cabochon with a sapphire accent, made into a wire pendant by Dale Cougar Armstrong, titled: Dragon’s Tear.

Metaphysically, folks still look to ammolite for the special properties of healing and good luck, as well as a good stone for meditation as it is said to radiate positive Earth energies.

Next week, we will learn a bit about a stone of a two totally different colors, charoite. Have you made wire jewelry with Charoite before? Email pictures to tips@wire-sculpture.com, and they could be featured!