Opalized Fossils
one of a series, Mystifying Opals

When thinking about opal of any kind, we usually visualize some of the beautiful material photographed for our previous opal articles. But did you know that opal not only forms in the seams, vugs, and cracks of matrix rock, but that it can be found as fossils? Let’s begin by clarifying what a fossil is. Basically a fossil is the prehistoric, physical proof of life before recorded human history. Generally this covers animals and plants that have been “turned to stone” or “petrified,” as well traces of early life like footprints and charred wood.

I think the best description comes from The Fossil Book; “fossils are the remains or traces of organisms that lived during past geologic times and were buried in rocks that accumulated in the earth’s outer portion, or crust.” For the purposes of this particular article, I will be talking mainly about petrified and “cast” remains.

A “cast” fossil formed when an organic material, such as a tree limb or shell, had been trapped in sediment (sand and clay, or volcanic ash and mud) that dried out and became firm. Eventually the organic object decayed and dissolved, leaving a cavity or natural mold. Later, rainwater containing materials such as silica filled the mold, and when the liquid evaporated, a “cast” was created. In certain parts of the world, these casts are often found as opal, and can be called “opalized fossils”.

Both Australia and Nevada, USA have locations that are well known for their opalized fossils finds. In Coober Pedy, Australia these items are more commonly clam, mussel and snail shells, where silica-rich water seeped into the organism as it was decaying, filling the clam’s cavity and replacing the calcium shell as it dissolved. Often part of the original shell is present on the opalized fossil specimen. (Click here and scroll to the bottom to see an opalized cockle shell.) The fossils that have opalized in Nevada are found as petrified wood casts, some of which are said to show amazing detail of the original wood, in a variety of colors, including the “black” that Virgin Valley is known for. Click here and scroll down to see an example of opalized petrified wood, captioned “Petrified Wood with Precious Opal,” from Virgin Valley, Nevada. Opalized wood can also be found in other North American locations such as New Mexico, Texas, and Arizona. 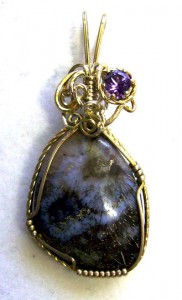 Opalized wood from New Mexico, cabbed by Charlie Armstrong and made into a gold-filled wire pendant by Dale Cougar Armstrong, accented with amethyst.

The definition of a fossil has been disputed for years, and as the Lightning Ridge area of Australia claims to have the only “black” fossil opal in the world, obviously they do not think of Nevada’s opalized wood as a fossil. However, because of the amazing array of opalized fossils that are found there, they can justify being a bit biased. In prehistoric times this part of Australia was under an inland sea. Now a hot and dry desert, miners dig amazing fossils, quite a few of which have been opalized. These specimens include many different items such as dinosaur and shark’s teeth, a variety of sea shells, pinecones, crocodiles, turtles, an array of marine fishes, and even opalized reptile/dinosaur skin! Can you imagine being able to dig up the fossilized skeleton of a plesiosaur or a dog shark and find that it was opalized?! Amazing. Of course, a lot of good specimens are damaged during their excavation as miners are looking for opals with color and a lot of the fossil remains are common opal. This area of Australia includes the opal fields and towns of Coober Pedy, Lightning Ridge, White Cliffs, Andamooka, Mintabie, and Lambina.

For some stunning examples of opalized fossils from the Australian Museum, please click the following links: This dinosaur tooth is a fine example of an opalized fossil from Australia, and this opalized dinosaur toe, found in New South Wales, is 8cm (3 inches) long!

There is an extremely rare form of opal known as a “pineapple” that can resemble an opalized fossil pinecone. Actually it is a pseudomorph of glauberite, where the original mineral decayed and was replaced by opal, and it is the most valuable opal in the world! This unusual form of opal is occasionally found in the White Cliffs and Gemville areas of Australia and, believe it or not, this is the most valuable opal formation in the world! Click here to see several pineapple opal examples from White Cliffs. 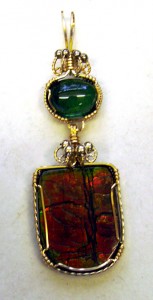 I know that ammolite is not really opal, but it because is “opal-like” and a lot of folks haven’t been told the difference, I am just going to touch on it here. Often mistakenly labeled “opalized ammonite”, the ammonite shell is actually composed of a form of aragonite. No opal content whatsoever! (I will explain more about this amazing and relatively “new” gemstone in my Ammolite Gem Profile) Some of the confusion comes from the fact that one of the largest mining operations of ammolite is named Korite, which is the same name as a boulder opal from Australia. This ties into my next Gem Profile: boulder opals, which will be the last segment in this Mystifying Opal series. Have you ever wire wrapped boulder opal? Email pictures to tips@wire-sculpture.com, and they could be featured!