White Precious Opal
one of a series, Mystifying Opals

Probably the most recognized opal is one with a milky white background that displays a variety of colors, sometimes across the entire stone, but most often just a flash of color here and there. This type is known as "precious white" opal, that is found in a wide variety of grades and colors, and was adored by Queen Victoria, who enjoyed giving opals as wedding gifts.

Opal pendant wrapped by Gail Maas in gold filled wire; this little opal is only a 1/2" tall. Click to enlarge the image, and check out its reflection to see its fire!

The first time that white opal was documented as a gemstone was in ancient Greece, where it was named the "Queen of Gemstones"; best described by the famous Roman author Pliny, who wrote that opal was a gemstone that combined the best possible characteristics of the most beautiful of gemstones: "the fine sparkle of Almandine, the shining purple of Amethyst, the golden yellow of Topaz, and the deep blue of Sapphire, so that all colors shine and sparkle together in a beautiful combination." This white opal was mined in the area that was Czechoslovakia, and was known as "Hungarian" opal. Transported to the Roman Empire for use in jewelry and ornaments worn by those with a high ranking in their society, early Greeks thought that these opals were the solidified tears of Zeus. As such, the name "opal" comes to us from the Greek "opallios," meaning "color change." These early opals were actually quite cloudy and pale, when compared to what is found today. 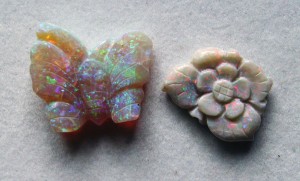 In Part 3 of our series on opals, Black Precious Opal, we learned that Lightning Ridge in Australia produces some of the finest "precious black" opals in the world; "precious white" is also found there and in many other parts of Australia, which produces about 95% of the world’s precious opal.

Besides Lightning Ridge, White Cliffs, and Andamooka, one of the most famous Australian opal fields is Coober Pedy, nicknamed "Opal Capitol of the World."

Precious Freeform Opal from Coober Pedy, wire wrapped by Juliet Brinker-Burgess, cut and polished by her late husband Ron Burgess (the opal is approx. 35mm at longest point, 33mm at widest point, with fire throughout).

While researching this legendary location, I was amazed to find out that Coober Pedy is largely an "underground" town! The article Under the Range by journalist Ron Gluckman not only covers the long history of the area, but also describes this "town of tunnels and caves" in an interesting and humorous way. Modern-day Coober Pedy reminds one of historic stories about the "wild" American Southwest. I also found the Aboriginal meaning of the name Coober Pedy to be very appropriate: "white man in a hole." The opals that come from Coober Pedy have a background color from clear white to milky white, and can also be found water clear, which are called "crystal." 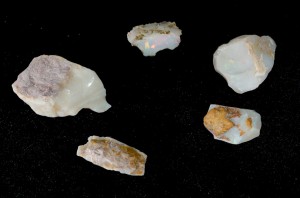 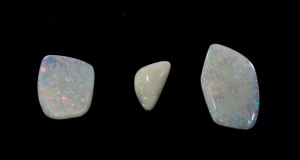 Crystal opal is named for the lack of color, rather than the structure of the material, because as we learned in An Opal Introduction, opal will not "crystallize." Opal crystals have to be some of the most amazing gemstones; like a soap bubble, the clear matrix is filled with an evanescent play of colors, rising from the depths of the stone. Some of the prettiest that I have personally seen comes from Ethiopia. These nodules form in the vacancies left by gases while the volcanic pumice flowed and solidified. Often an entire vug can be filled with opal crystal, and only the softer pumice edges needs to be cleaned off before the chunk can be polished in a freeform shape. Most often opals are made into cabochons; however, opal crystals, like jelly opal, can also be faceted. 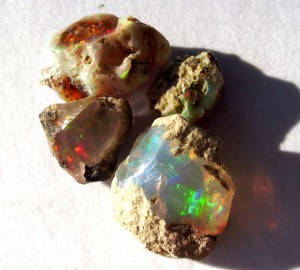 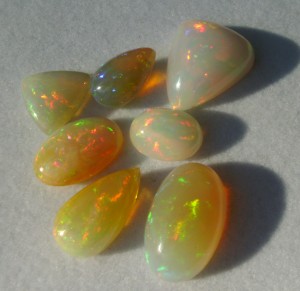 Precious white opal can also be found in a variety of locations in Europe, Africa, Iceland, and in the United States. In Idaho, precious opal can be found in white and pink, and because the cavities it filled in the rhyolite-obsidian were once gas bubbles, it can be called "Bubble Opal." Blue precious opal is mined in Arizona, showing flashes of red, orange, blue, and green. Do you remember reading about all of the volcanic material in Oregon? Well, opal is found here as well, in an area that has been aptly named "Opal Butte." This precious opal formed in many different ways, including crystal and fire varieties, and according to my friend David Federman, Oregon opal is on the way to the top of the opal heap! To read about the brief history of this new location, and the spectacular material it is producing, please enjoy Oregon Opal. 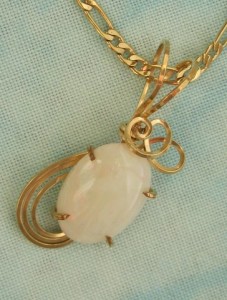 Have you ever seen a fossil that has turned to opal? The subject of next week’s Gem Profile will be Opal Part 5, Opalized Fossils. Have you made jewelry with any such material? Email pictures to tips@wire-sculpture.com, and they could be featured!