Pyrite, also known as iron pyrite, has been used by humans for many centuries. Early man discovered that when struck, the stone emits sparks, thus its name comes from the Greek language, basically meaning “fire.” Archaeologists have found that burial mounds in South America often contain chunks of pyrite, perhaps so one would have fire in the next world. Aztec ceremonial masks have also been discovered where the eye sockets had been filled with pyrite along with large, flat, polished pieces of pyrite. Speculation is that these were used as early mirrors by early Aztecs and Incans. Many early peoples around the globe used pyrite, including American Indians. 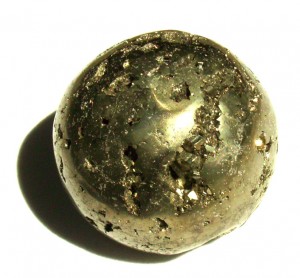 A sphere made of pyrite from Peru. Private collection, Dale Armstrong.

The ore that we know as pyrite is a polymorph of unstable marcasite, that occurs in all geological forms: igneous, metamorphic and sedimentary. One of the most common metallic minerals, found all over the world, pyrite is a brittle iron sulfide with a Mohs hardness of 6-6.5 and a brassy gold color. The usual crystal form of pyrite is a perfect 6-sided cube with striations (fine parallel lines) that run across each side, but each side’s striations are different than the one next to it! (To see what I mean, draw a cube and make striations on each face in the same direction as the face on the exact opposite side.) Pyrite can also form in a 12-sided cube that has its own name, “pyritohedra.” 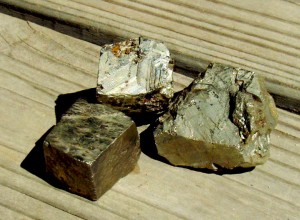 Although pyrite is often mistaken for gold by uneducated prospectors, and has been nick-named “fool’s gold,” real gold can be included within the pyrite, and stringers of gold may run alongside pyrite in quartz veins. This occurrence gives a real value to that special pyrite! The real use of pyrite in industry is for the sulfur content. However because sulfur is so prominent, even though it is called “iron” pyrite, the ore is rarely used to extract the iron from. Living in southeast Tennessee, I found the following information interesting: during WWII sulfur was in great demand to make sulfuric acid, and the deposits of pyrite found in Ducktown, TN were very useful to the United States government. 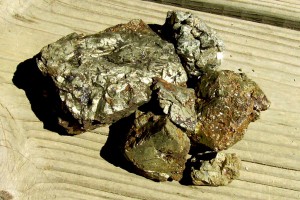 I live just “down the road a piece” from the pyrite deposits in Ducktown, so I had to hunt for some specimens to share with you!

Pyrite is very special in the geologist’s world, because it can replace about anything, taking the form of the original item! For example, in several European locations like France and Russia, pyrite has filtered into cavities left by deteriorated ammonite fossils making a new specimen called a pseudomorph. Often the chambers of this ancient life form are surrounded by tiny, perfect pyrite crystals and after the top is mirror-polished, these pieces make awesome jewelry components! Pyritized fossils of different types, including brachiopods, can be found in New York, Ohio, Illinois, and Germany. 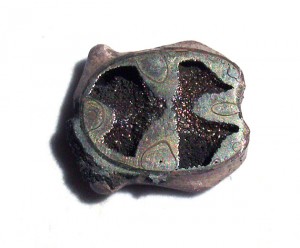 From Russia, one ammonite chamber that has been replaced with pyrite. Private collection, Dale Armstrong. 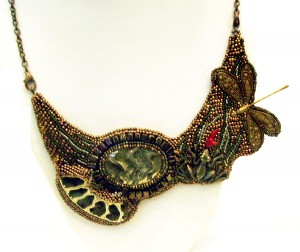 One of the winning bead designs from The Fairy Bead Festival in Kiev, Ukraine, made using two pyritized ammonite slices.

As I have already mentioned, pyrite is very common and found all around the world. It is a heavy material and it does tarnish so pyrite is not really popular for making jewelry designs with. Perhaps the best shelf pieces come from deposits in Peru and Brazil, but one of the most amazing geological specimens is found in Illinois, USA. These flattened radial discs are found between layers of 320 million year old shale and might be either a type of fossil or a flattened pyritohedra. Due to their shape, these are called a pyrite “sun” or “dollar.” (Whatever they are, I love using them to make unique wire jewelry pieces!) 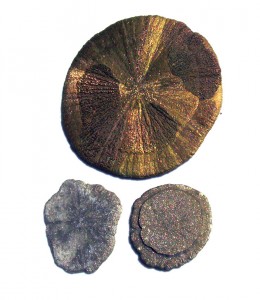 This pendant by Cindy Albers contains either a pyrite or marcasite piece.

Because pyrite can occur in different rocks and formations, and is so abundant, there really is no counterfeit to be aware of. However, you may wish to determine if the specimen you have is pyrite or marcasite. Marcasite is also a metallic iron sulfide, but its color is more white and it doesn’t tarnish brassy gold, so it is difficult to mistake it for iron pyrite. Often as small faceted stones, set in silver to promote a shine, marcasite has been used in jewelry-making for centuries. 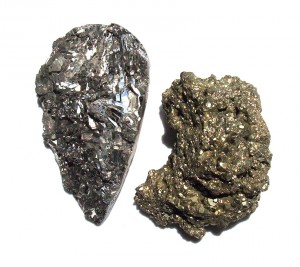 A marcasite cabochon is on the left and pyrite is on the right. Notice the definite color and crystal shape differences between the two. Private collection, Dale Armstrong.

Modern metaphysical healers use pyrite to help balance the “right” and “left” brain, transforming energies between the two. Metallic minerals are also thought to help bring financial help and fortune to a household. 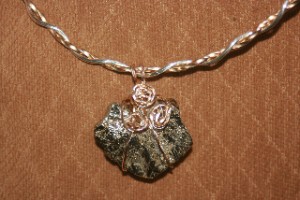 Next week I will begin a short series on one of the most mystifying stones of all time: opals! My gem profiles will include highlights on some of the most well known precious, and common, opals from all over the world. Have you wire wrapped Opals before? Send pictures to tips@wire-sculpture.com and they could be featured!