Bloodstone
one of a series, The Wonders of Jasper

This article is one of a five-part series on Jasper. Here is a complete list of our Jasper articles: What is Jasper?, Bloodstone, Picture Jasper, Patterned Jasper, Beautifully Colored Jasper 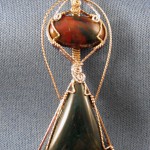 In Part 1 of this series on jasper, I mentioned that jasper and agate are often confused. One example is the deep green gemstone with bright red spots, or splashes, that we know as bloodstone. All jasper is a microcrystalline form of chalcedony, but because bloodstone is sometimes translucent it can also fall into the classification of agate. Common or "ordinary quality" bloodstone is a forest green color with many inclusions, and has only a few areas of red. This variety has been called a gem-"rock", but is not considered to be of gem quality. The type of bloodstone that is considered to be a gem-"stone" is a high-quality, translucent, rich green with many well distributed bright red splashes. (Now you can understand why the gem-"stone" version is often described as an agate!) 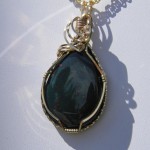 The beautiful forest green of bloodstone comes from iron, actinolite, and chlorite content, and the red is due to the presence of iron minerals. Sometimes the included iron and chlorite can mass in dense areas giving the appearance of moss, resulting in bloodstone occasionally being mistaken for moss agate. During the formation of jasper, many minerals layer, creating a wide variety of colors that hue, spot and blend or stipple together on the deep green background, (almost like a painter didn’t fully clean their brush before adding another color to a canvas) and the effect is stunning! But because the red spotted green is not really "pure," this material is given yet another name, "fancy jasper." 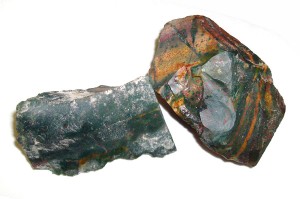 Chunks of jasper rough. Notice the "bloodstone" on the left, consistent deep green with well distributed red spots. On the right the red/green combo melds into a variety of other colors showing the bloodstone evolving into "fancy jasper." Private collection, Dale Armstrong 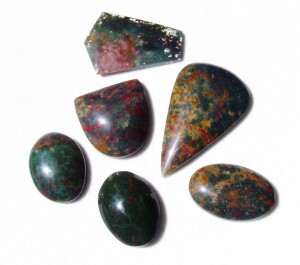 A collection of jasper cabochons; on the left and bottom is common bloodstone while on the right "fancy jasper." Private collection, Dale Armstrong 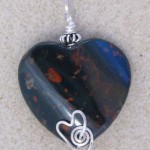 Common bloodstone is as abundant as all jaspers but it is primarily found in Australia, China, Brazil, Scotland, Russia, and North America. The reason jasper varieties easily take a nice polish is due to jasper’s close mineral structure and consistency. This feature makes common bloodstone and "fancy" jasper very popular with jewelry designers; the variety of shapes and sizes of beads and cabochons is amazing. (I recently told an associate that I would feel comfortable and prepared if I took only the collection of beads below (photograph) and nothing else to a weekend class, because fancy jasper provides a favorite color for everyone!) 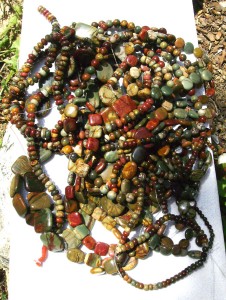 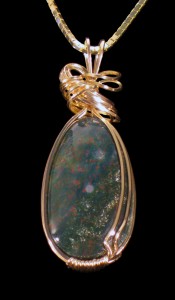 The origin of the name "bloodstone" has several theories. Christian legends include a story of how the hill that Christ was crucified on was covered in deep green jasper rock, and when His blood was splattered upon them, the blood permeated all green jasper on the earth, turning the jasper into Bloodstone, which then became a healing stone. However in the Old Testament, bloodstone was one of the required cabochons to be set into the breastplate of the High Priest, and these two Biblical stories conflict in a timeline.

Many folks may not know that another name for bloodstone is Heliotrope. This name comes to us from the Greek astronomer Pliny, who surmised that the stone could assist in viewing the sun when cut thin enough to be used as a mirror or lens ("helios" means sun). Heliotrope became the birthstone for the month of March (along with aquamarine). 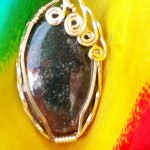 Obviously associated with blood and therefore the human circulatory system, ancient Asian cultures have used powdered bloodstone in many medicinal applications both in the past as well as currently. Metaphysical practitioners relate bloodstone to the healing of nose bleeds and as a general blood cleanser. Bloodstone is also used for removing blocks in circulation and ancient Egyptians thought that it aided in the removal of tumors. Bloodstone is also the astrological gem for those born under the sign of Pisces.

Now let’s go back to the question I asked in Part 1 of The Wonders of Jasper. Is Albina Manning’s lovely necklace an agate or a jasper? Answer: it is made using "fancy" jasper!

Next week we will explore the many varieties of "landscape", or picture jasper. Have you wire wrapped Picture Jasper, or Landscape Jasper, before? Send pictures to tips@wire-sculpture.com and they could be featured!