When most people talk about Jade, they are thinking of a lovely green stone that can be carved into a wide variety of ornaments, including jewelry. Jade is actually the geological label used for two different minerals that man has recognized for centuries. The more precious material, Jadeite, is usually identified as green, can also occur with or as other colors such as black, pink, red and violet, while the more abundant gem-rock Nephrite is found mainly in color hues of green, white, and gray. Both of these lovely metamorphic stones have an oily feel, are aluminum silicates, have a Mohs hardness of 6.5 to 7, streak white, and can occur in similar colors, so they are rather difficult to tell apart. It wasn’t until 1863 that these two materials were scientifically determined to be two different minerals! 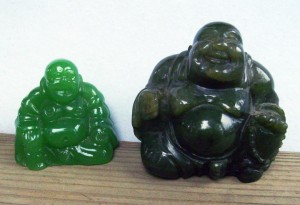 Rare green jadeite owes its color to chromium, while darker color versions of both jadeite and nephrite come from the additional presence of iron. The translucent, emerald green form of Jadeite is recognized as “the” gemstone version of all stones labeled jade where the most perfect, gem specimens found in Burma are aptly named “Imperial Jade”. Jadeite colors also include apple-green, gray, white, cream-yellow, and lavender! Jadeite material is found in several different countries, such as Guatemala, Russia, Kazakhstan, Japan, and North America; however, the absolute best gem quality material is mined in Burma. Believe it or not, there is no true jadeite to be found in China! (For those who wish to learn more about this special material, recommend my friend David Federman’s article titled Burma Jadeite; also, his Lavender Jade article.) 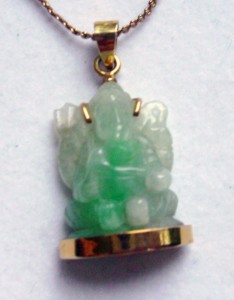 Nephrite is a form of the common mineral actinolite (a form of asbestos) and is considered to be the jade of ancient China. The nephrite version of jade can also be found in various locations around the world including: China, Taiwan, New Zealand, Canada, India, Australia, USA, Russia, New Zealand and Germany. Probably the most famous mines in North America are in British Columbia, Canada. These mines produce nephrite as well as a nephrite imposter, serpentine, which is really a type of marble. The nephrite form of jade that is mined in British Columbia is massive (boulders often weigh 100 tons or more), and is used to make tiles for home interiors as well as carved into huge statues, made into jewelry pieces, and even used for countertops! Sometimes it occurs in such a rich dark green that it is called Spinach Jade. 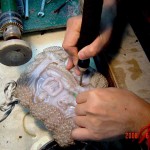 Visiting the Orchid Jade Factory in Chiang Mai, Thailand we were privileged to watch the carvers work on jadeite.

The name “jade” comes from Spanish explorers with Cortez, who received small, kidney-shaped stones from the Indians in the Americas. As history tells us, early civilization believed that items found in shapes representative of the human body had a special meaning for the body, so they named this material “stone of the flank or loins”, or “kidney stone.” Therefore these little jade specimens were thought to help with disorders of the kidneys.

Both forms of jade have enjoyed being a part of history and culture for centuries. Prehistoric man used this firm but easily-carved material to fashion many types of hand tools and weapons. Asian peoples have revered jade throughout history: wars have been fought over it and entire cities have been traded for it! 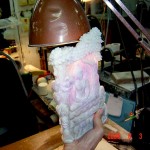 Some scholars have suggested that the Chinese civilization was built around jade. Prized for more than 6000 years, in China jade was known as the Stone of Heaven, adorning both the population and historic buildings of that country. Whereas Westerners prefer the green varieties of jade, the Chinese consider the white version more precious than gold. The Chinese even crafted cups and plates, so that people could take in the fortune and prosperity the stone was valued for.

To the Maori of New Zealand, jade was and is still an important cultural symbol. The stone is carved into amulet pendants called hei-tiki that are worn for spiritual guidance and protection, passed down through family generations. Jade was also prized by the Olmec and Mayan civilizations in the Americas.

In many modern cultures, Jade is given as a token of friendship, or as an engagement gift. To some, Jade symbolizes the 12th wedding anniversary.

Jade: The Real and the Imposters

Like most important gemstones, there are always a few imposters that one must watch out for when shopping for jade. In China, for example, the word jade has traditionally been applied not only to nephrite jade, but to green serpentine and soapstone (talc) whose appearance closely resemble true jade. Common misnomers and the materials they represent are: 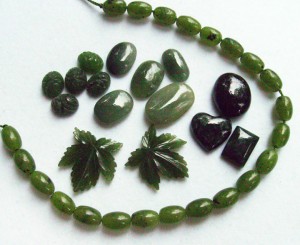 Both jadeite and nephrite are considered stones that resonate with the heart chakra, assisting in bringing calm and clarity of thought to an otherwise stressed, anxious, or restless spirit. Jadeite especially is a positive stone, assisting in bringing friendships and riches to a person. Relating to the kidney history as discussed above, nephrite (related to nephros, Latin for kidney) is thought to be beneficial for kidney issues.

There are so many stories and legends associated with this ancient and often mystical mineral, that you can spend hours researching jade in your local library or on the Internet. Next week I will begin a short series on the items we make jewelry with, from the feldspar group. Have you wire wrapped any kind of Feldspar before? Send pictures to tips@wire-sculpture.com and they could be featured!

Gem Profile by Dale “Cougar” Armstrong and the WS Staff 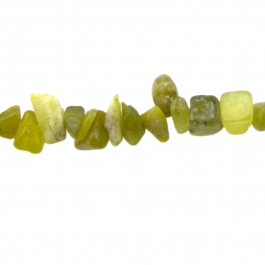 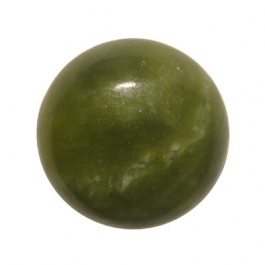